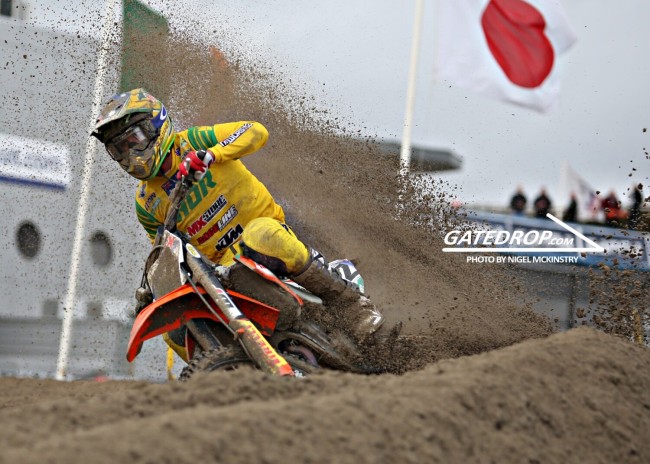 Regan Duffy came into the Motocross Des Nations as an unknown rider for many European fans but the Aussie showcased just how good he is at the event.

At only seventeen years old, it was his debut at the event and also his debut race on the 450cc but that didn’t phase him at all.

We caught up with Duffy to get his thoughts on the event and much more.

Gatedrop: Regan, you had a good MXoN, can you talk me through your day and you must be pleased with the speed you showed?

Regan Duffy: Not too bad. It was a good day in ways for sure but for it to end in a bike failure wasn’t the fairy-tale finish I was hoping for. I had no goggles for majority of both races with two mediocre starts which didn’t make it any easier but I was having the time of my life. I nearly got to 9th in the first moto but a last lap crash going for a pass put me back to 11th. I seen the replay on Mxgptv and I went back to something stupid like 34th so that made me feel a bit better about moto 1 (laughs).

Moto 2 I got a top 15 start and got covered in mud off the start so I struggled with vision and went back to about 25th. Maybe 10 minutes in I again had to throw my goggles. I think the sand being so fine was the drama with goggles just getting in little places where it shouldn’t. Anyway I was slicing my way through the pack and got up to 13th, I was catching two or three people in front of me by a fair bit per lap and sadly my bike let go. It was disappointing for me to go all that way and not be able to finish but pushing my bike back through the pits I smiled and thought that was the most fun I’ve ever had on a dirt bike. Passing and battling with my past and present heroes was so cool and I can’t wait to get back and have another crack.

Gatedrop: When I saw you at the press conference on Friday, I was shocked at how big you are, you’re like the Australian Jasikonis! Do you feel that holds you back on the 250cc?

Regan Duffy: (laughs) Yeah, I’m quite tall, I only turned 17 late July! I’m pretty happy with my size right now so hopefully I’m done growing. I think there’s actually benefits of my size I can really man handle the 250 and I’m only around 75kgs so it’s not too bad. But for sure I can’t wait to race the 450, I love them.

Gatedrop: It was your first Motocross Des Nations. How did you find the event? It can be overwhelming for some but you seemed to handle it fine!

Regan Duffy: Honestly no drama’s for me I just couldn’t stop smiling. My dream my whole life has been to represent my country on the world stage so I guess you could say I’ve been mentally preparing for this since I was four years old (laughs).

Gatedrop: The track was completely different for both days after heavy rain. How did you find the track over both days?

Regan Duffy: I thought the track was awesome, with that amount of rain we were at one of the best places to be. I’m sure if that was a clay track there would have been some serious issues.

Gatedrop: How did you find the Netherlands for the time you were there- it’s quite a bit different to Australia and what you’re used too!

Regan Duffy: I was really impressed with how good everyone’s English was! I was prepared to be pointing at items on the menu but it was awesome I could just talk normally. One thing I will say are the cyclists over here are pretty brave, a car coming towards them does not phase anyone at all.

Gatedrop: After racing with the 450cc, would you consider racing the 450cc a lot more? I think it suits you a lot better.

Regan Duffy: For sure the 450s for me, I’ve raced and practiced on the 450 all year in my home state and I’m really comfortable on it. It suits my style.
Gatedrop: Have you got any plans for 2020 yet – I heard a rumour you turned down an MX2 World Championship ride but I’m not sure that’s true!
Regan Duffy: There have been some talks but I wouldn’t say I’ve turned anyone down, it’s just such a big move for me at 17 so I have to make sure everything’s as good as it can be.

Gatedrop: Have you got ambitious to race the World Championship in the future?

Regam Duffy: My goal is definitely to end up in the GP’s, I really think it’s for me. I know how hard it is, some seriously talented riders from Australia have gone over so I’ve got a gage off them a little bit. Also, Ross Beaton coaches me so with his advice and being close with Jed Beaton to top it off I have insider perspective so that really helps. A two year contract would be nice so I could have a learning year then have a go at the title the next if all goes well.

Gatedrop: Anyone to thank or anything to add?

Regan Duffy: I’d like to give a massive thanks to Motorcycling Australia, Mark Luksich, Michael Byrne and Garry Ben for the selection. My team here in Australia Raceline Ktm for my suspension and other help with the even so a big shout out to Chris Woods and John Tisdale. Of course my Dad because I wouldn’t be able to do any of it without him, my personal sponsors Berry sweet strawberry Farms, Oakley Australia, Gall brothers medical (Cti) and Cassons Australia. Thankyou!