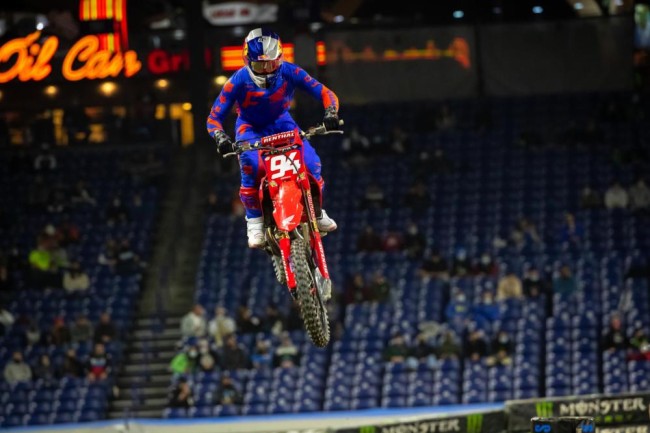 Ken Roczen: It’s hard to leave Ken Roczen out of this column at the minute! Each time he wins he does it in a different way and ticks another box of verification regarding his health and his return to his best form.

Roczen this time wasn’t as comfortable as he was on Tusesday night and wasn’t able to pull away but he managed to hold 1-2 second lead the entire way, first from Barcia and survived a collision with the aggressive Gas gas rider, didn’t flinch and upped his game to get a little lead so it didn’t happen again!

Then he had his nemesis, Cooper Webb, who has a knack of getting Roczen on last lap, breathing down his neck at the end but Roczen made no big mistakes and didn’t give Webb a chance to run it in on him as he took his third win in a row showing superb mental strength under the circumstances of who was behind him.

Six rounds in, Roczen has stamped his authority on the championship, has a 16 point lead and is in control. Of course as he have seen many times, anything can happed but this is how 2017 was threatening to look like until Roczen got injured, now four year later, the mercurial German is making up for lost time.

Cooper Webb: It’s a race Cooper Webb probably feels got away from him after his sublime performance in practice that saw Webb top every single session and for a rider that isn’t usually near the front, especially this year it was huge turnaround! Webb looked superb and felt finding better settings and more comfort from the new air shock was key to finding the extra speed that had been lack at the start of the season.

The race didn’t quite go to plan with Webb taking his time to get by Barcia and running out of time to get Roczen despite putting in that end of race charge we are all used to. But on the whole, this was Webb’s best performance of the season when you take the whole day into consideration, although he now needs to start clicking off wins quickly with Roczen 16 points ahead.

Malcolm Stewart: The new 450 signing for Star Racing Yamaha has been brilliant this season! Showing raw speed two years ago and consistency last year, Stewart is combining both in 2021. His fitness had been questioned in the pass too but this year everything seems to be on point and after showing a lot of potential the last few years, Malcolm is delivering now.

He isn’t afraid to mix it with the big names, and he has the speed the to run with them. A fourth at Indy and now a podium should definitely be in his reach this season. Stewart has been a great signing for Star Racing Yamaha.

Jo Shimoda: Jo Shimoda is the quiet achiever but his riding is impressive. The young Japanese rider took his second podium of the season but felt this was more deserved than his first that came when Craig and Lawrence collided on the last lap and went off the track. Each weekend Shimoda has been gradually lifting his pace but limiting the mistakes as he does so. He’s a smart rider that is learning every week and proving to be a great signing for Mitch Payton as he keeps the PC flag flying in the absence of Austin Forkner.

Shimoda even showed more aggression in the heat race this weekend when he went for the lead passing Lawrence and Oldenburg in one startling move – only to get it wrong in the whoops and go down! But it showed the growing confidence of the polite young teenager, he is starting to believe in himself more and that translated into his brilliant second place performance in the main with no signs that he was riding above his limit.