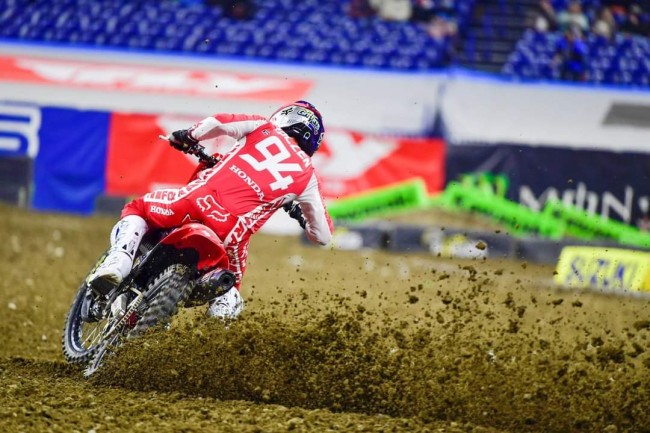 Ken Roczen: This was a riding clinic from the mercurial German. A good start a quick pass on Justin Barcia in contrast to round one underlined the mentality change in Roczen by round five – he was feeling good and didn’t want to leave any more points on the table p it was go time! Roczen has looked great all year, perhaps the rider with the biggest comfort zone in the field, you felt this was possible and on Tuesday night it happened, Roczen crushed the field.

You can’t help but think back to the 2017 crash, a crash that many felt felt would mean he could never come back to this level, but this was pre-crash Roczen on show and it’s great to see one of the biggest talents the sport has ever seen be able to reach that extra level this season. Roczen is doing everything right at this point in the season and is very much the man to beat, he has been successful this season in every way possible and kept his cool in frustrating situations.

Justin Barcia: This was huge race to stop the bleeding for Justin Barcia. His season was starting to trend like 2020 on the Yamaha, a strong start then gradually getting more inconsistent but Barcia showed that he is determined to keep himself in the game this season on the Gas Gas.

His great starts were back and once up front he fought hard to stay there. He couldn’t stay with Roczen and despite a couple of late dives into the turns to pass Roczen back immediately, Barcia never resorted to anything wild then impressively held strong a the end of the race under immense pressure from Tomac. He didn’t win but this was a great night for Barcia in terms of execution under pressure and good decision making that might not have been there a few years ago.

Aaron Plessinger: He told us all at the start of the year that things would be different in 2021, that he was feeling back to his 250 comfort level on the 450 now he is back with the Star Racing team and in the last few weeks he has been proving that true – but Tuesday night was an exclamation mark on that fact!

Plessinger had shown flashes of brilliance this season and some good top ten results but he was on it all night long at Indy 2. He ran close to Tomac in the heat once the champ got by and then rode really well in the main to work into fourth and only lost the position late on when Cooper Webb forced his way by but a fifth place was a great result for Plessinger after two years of injury and frustration made him the biggest question mark for 2021 and a lot of pressure on his shoulders to justify his factory ride. At indy he showed why he got that ride, the talent was there, the speed was there and the fitness was tere, Plessinger looks loose on the bike and now he has got a top five underhis belt his confidence should soar.

It must be mentioned that all three Star Racing Yamaha rider are having a good season, Malcolm Stewart was flying again last night until a crash as was Ferrandis until a bad start and crash halted his progress in the main -but he still came back to top ten. For their first 450 effort this is impressive stuff from Star Racing and their riders – not to mention the fact their 250 guys are battling for the title on the East coast!

Michael Mosiman: This must have been a frustrating third place! For half the race Mosiman looked superb, he was inching away from championship leader Colt Nichols and it looked like his first win was imminent until a back marker shot across the track in mid-air right into the line of Mosiman who was forced into evasive action – losing hm the lead in the most unlikely and unfortunate of circumstances!

That ruined the flow of the Gas Gas rider and Craig went past too but he still got on the box and performed to the highest level he has all year. Ever since Jett Lawrence took him out, Mosiman has lifted his speed and intensity, and is now a contender for the win with the Star Racing guys. Mosiman has done a good job this year for Gas Gas and the TLD team can be very pleased with their season in the 250 and 450 class so far – barring their bac marker frustration tonight that possibly cost them the win!