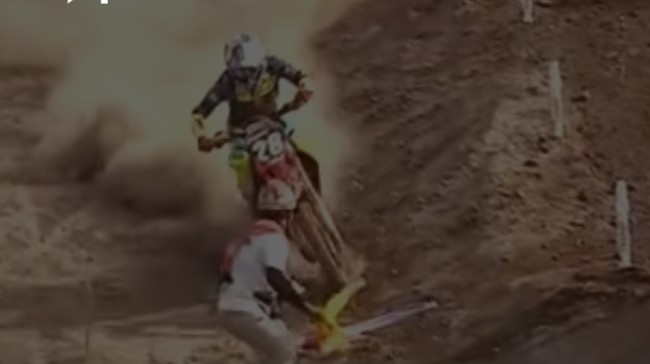 Despite winning the Grand Prix in Indonesia, Tom Vialle ran into unlucky track worker after an off-track excursion that temporarily cost the Frenchman the lead of the race and left the track worker on the ground!

Vialle ended up going 1-1 after a fast Simon Laegenfelder crashed out of the lead with Vialle closing in on the spectacular track that saw Vialle regain the red plate after a roller-coaster moto!

The 2020 MX2 world champ said: “It was actually a good race weekend, I had a nice feeling on the track since yesterday. In the first race, I had a great start and was leading with more than ten seconds, so I was pretty comfortable. In the second one, I passed Simon in the first corner and I was leading but then I had a mistake and went off track. I actually hit a marshal and I hope he is ok. Simon the led for a few laps and then had a crash so I took over the lead. I’m really happy about the weekend, it was great”.