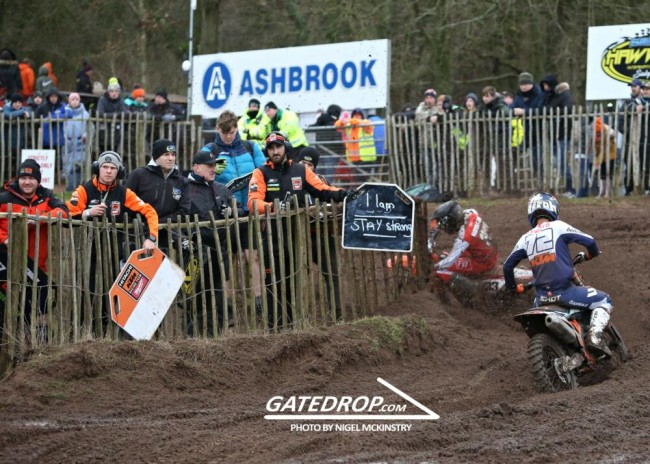 We caught up with Stefan and Liam Everts at the end of the day at Hawkstone Park and Stefan had some intertesting things to say on a variety of subjects:

Liam… It’s nice to see him finally in the world championship. He’s got goals, he’s got a good level but still lots to improve and gain. There are still many steps to do from him. For me the goal is that we have a progressive year and get better and better. Let’s start with the top 20 and gp from there. It’s for sure another big step for Liam, he needs time to grow. For sure there is pressure for him with the name Everts. It’s not always easy for him and we work on that in the week with a mental coach.

He works hard for it and he’s a very dedicated young man, it’s still a long way and we will see how things will go.

MXGP… It’s already a strange start to the season with all the injured riders. I seen Renaux last weekend and he looked very impressive on the 450, I think he can be a title contender, together with Tim of course. Jorge is a beautifully talented rider and I hope he can get himself fit enough to go for a full 30 minute moto, he is for sure the best starter. MXGP is away very nice to see and watch all the big stars.

Herlings winning the 2021 title… He worked hard for it, he had some things happen towards the end when he crashed on the start in Arco. He’s a hard fighter on the track was was just that bit better than the other two. The best guy deserves to win.

De Wolf… He made a big step from last year. Last year he showed some good things in the GP’s. He made huge steps and again this year, so it looks like he’s going to be running top three and who knows he could be a title contender. It’s a long season you have to be consistent and still many things for him to prove but the speed is up there. He’s one of the fastest guys.

Get the full interview from both men below, including Stefan on advising TKO and potentially losing his GP win record to Herlings this season as Liam discusses his day at Hawkstone:

Podcast! Jonathan McCready and Andy McKinstry review the action from a brilliant Hawkstone Park, look ahead to the British GP as well as thoughts on Anaheim 3. Get it on iTunes here: