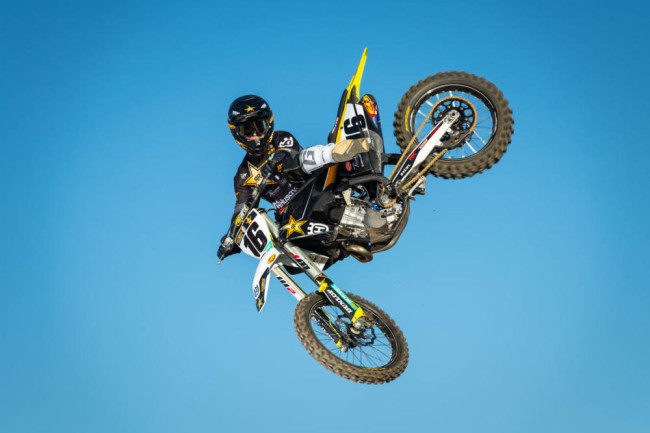 As the Rockstar Energy Husqvarna Factory Racing Team gear up for the upcoming 2021 AMA Supercross Championship, its six-rider line-up of Jason Anderson, Zach Osborne, Dean Wilson, RJ Hampshire, Jalek Swoll and Stilez Robertson sit down with world-renown motorsports commentators Ralph Sheheen and Jeff Emig to break down their past, present and future with an exclusive up-close-and-personal Virtual Press Conference from The Baker’s Factory in Florida.

Coming off an exciting 450SX podium sweep at the end of 2020, the dynamic trio of Zach Osborne, Jason Anderson and Dean Wilson returns to the Rockstar Energy Husqvarna Factory Racing Team once again, all aboard the FC 450 Rockstar Edition. Osborne, who most recently captured the 2020 450MX Championship, brought a strong charge into the final rounds of Supercross and he looks to pick up where he left off in 2020. His teammate and 2018 450SX Champion, Jason Anderson, is a consistent front-runner in the highly-stacked class and he has his sights set on returning to the center of the podium this season. Dean Wilson continues to solidify his presence in the premier class, where he most recently captured a third-place podium finish at the 2020 season finale. With a healthy slate heading into 2021, Wilson looks to join his teammates in the season-long battle for top contention.

The Rockstar Energy Husqvarna Factory Racing Team welcome another familiar trio to the squad as all three 250 cc riders are returning members in 2021. RJ Hampshire assumes the veteran role this season as he enters year two aboard the FC 250. Hampshire established himself as a strong championship contender last season before succumbing to injuries that took him out of the running but he is healthy and ready to contest the 250SX Eastern title in 2021. In the Western division, Jalek Swoll returns for his second season of professional Supercross racing and he is joined by rookie Stilez Robertson, who will make his 250SX West debut this season following a brief introduction to the pro ranks with the 2020 Pro Motocross Championship.

The 2021 AMA Supercross Championship kicks off on Saturday, January 16 in Houston, Texas.