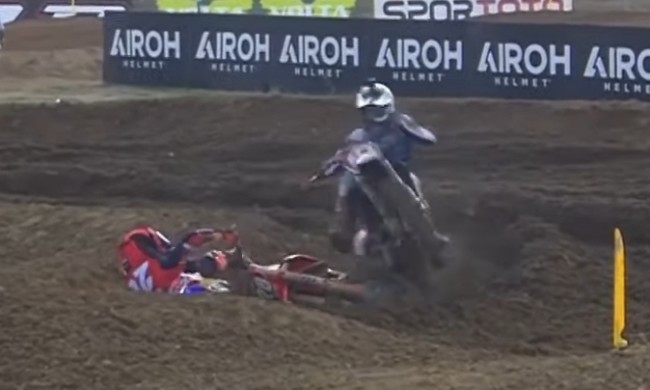 What a day of heart stopping, almost unscriptable drama in Turkey. Tom Vialle and Jago Geerts put on a duel reminiscent of Tortelli and Everts riding a pace at the maximum of human capacity but ultimately it was Tom Vialle’s crash that won him the race!

Yes, you read that right. Vialle’s crash won him the MX2 world title. After Tom won race one in a clutch performance to lead the championship by 1 point, it was winner takes all in race two and Geerts finally nailed the start before Vialle put a ruthless pass on the Belgian jumping into his line.

Geerts regrouped caught Vialle and made a couple of pass attempts but couldn’t make them stick, not block passing Vialle when he really should have. The fastest MX2 riders in the world were going at it on a pace that shouldn’t be possible under that pressure.

Then, entering a left handed corner with Geerts right in his wheel tracks, Vialle lost the front wheel and hit the deck but Geerts was too close, clipped the KTM and went down as well! His championship right there then disappearing in a split second in a cruel twist of fate.

Vialle got up first thus giving him a five second lead forcing Geerts to ride on the limit to win the title. Jago was absolutely flying and had the gap down to four seconds and fastest on the track until he went down AGAIN!

Geerts was now 12 seconds back but with 3 laps to go he amazingly got it back to four seconds until he cased the big double, costing him a couple of seconds and any remaining hope of the title he wanted so badly.

The ice cold and technically brilliant Vialle now goes Stateside as a 2 time world champion as poor Jago Geerts loses his first world title in the most gut wrenching way possible- by Vialle crashing! That will hurt for a long time.

An exhausted but jubilant Vialle said of the win, the hot pace and pressure: “Unbelievable. That was the hardest race of my career.”

“I didn’t get the best start in the second race, but I passed Kay and Thibault and was second behind Jago. I felt good actually and then after two laps, I passed Jago on the start straight. Then Jago was pushing a lot, he passed me two times but I passed him back and then I had a little tip over, and I crashed… When I crashed, I thought, this is it, it’s finished, because we were both so fast, but when I saw that Jago crashed with me, I thought “no way” this is not possible and I managed to get going quickly. It was crazy and I was lucky there a little bit, but that is part of the game. It was a long race eventually, I was watching the clock a lot. I am happy, it was a tough season and to finish like this is so nice”.

A dejected Geerts said: “Honestly, I’m very disappointed. I really can’t believe my luck. I felt good on the track today and gave everything. In the first race I missed the start a little bit and then had a little crash, but still finished second. In the second race, I was just really unlucky with Tom crashing right in front of me and I could not avoid his bike. It cost me a lot of time, and then I had to push so hard to come back that I fell again, and from there it was game-over.”

“”I would rather go home immediately now and relax. But losing is also part of the sport and do you want to know how I feel? It’s a sour pill to swallow when you know you are the fastest rider on the track and the decision comes only in the last laps. Second for the third time in the World Championship MX2. Thanks to all of you for your support.”