Talking Point: Who should ride MX2 for USA at Red Bud MXoN? 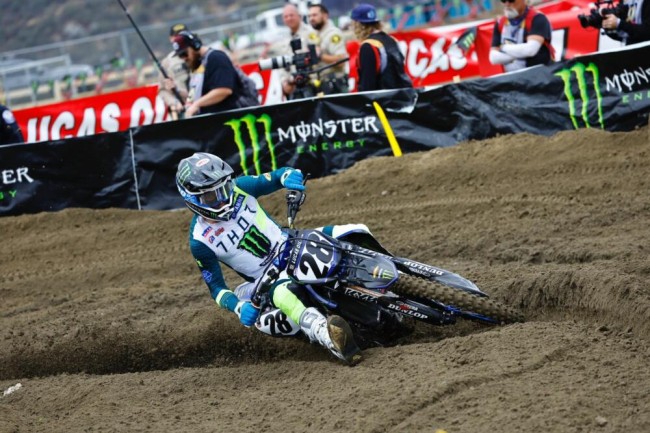 The 250 class in America hasn’t had a US winner yet and with Justin Cooper, the highest placed American in fourth in the championship, it means there is a big debate right now as to who is the most suited to ride the MX2 machine in the highly anticipated MXoN at Red Bud!

Cooper though, despite his generally good starts and MXoN experience from Assen, isn’t in the frame and it appears, Jason Anderson, after rumours he might drop down to a 250, is now out, so the most likely riders for the MX2 spot appear to be the 450 outdoor duo, Justin Barcia and Christian Craig!

Welp, sounds like the Anderson on 250 for ‘MXoN hit a snag. Likely down to Barcia or Craig for 250 slot, which is fine, those guys are good options. I was in favor of JA21 because he’s 3rd in points, but still glad to see 450 riders getting considered for 250

Craig makes sense after being able to win the 250 supercross series on the Star Yamaha this year, the bike is of course a very fast bike, he knows it well, and with Craig impressing outdoors on the 450, it’s easy to see why he would be a decent selection. Justin Barcia is an interesting choice as he hasn’t ridden a 250 in a number of years but he has a lot MXoN experience, and might be motivated for some revenge after being on the team at Red Bud in 2018! Added to that, Gas Gas have a proven 250 machine and Barcia’s high-revving style should suit it well.

Chase Sexton and Eli Tomac are widely expected to fill the 450 berths but both, it could be argued, could be an asset on the 250 as well – imagine Eli Tomac pinned on that Star Racing 250 Yamaha – he could even be up front against the 450s!

Sexton has already said he would be willing step down to a 250 as you can see below:

But it is still concerning that a country the size of the US haven’t got a young 250 rider they trust enough to help the team win, because with Sexton and Tomac they have an excellent foundation for victory if the 250 rider, whether that be Craig, Barcia or someone else, can pull through with a result.

Tomac, speaking to Steve Matthes, said it would take him 3 or 4 weeks to adapt back to a 250 but David Vuillemin (who admits he’s bias towards AMA SX and MX and wants US to be at the front) was pushing for Eli to ride a 250 – and thinks he could win the motos if he rode like he did at Millville. Eli said in response: “You’ve got my gears turning that’s for sure. I don’t know, we’ll see!”

See below at around 22 minutes in:

But with France likely to go with Vialle, Australia, Hunter Lawrence, and the Dutch with teen sensation, De Wolf, the other favorites have very strong representation in that division and the US MX2 rider’s performance could be key to the win. With that backdrop – Eli might actually be the best choice with Craig staying on a 450 for the Nations. David Vuillemin might be right!