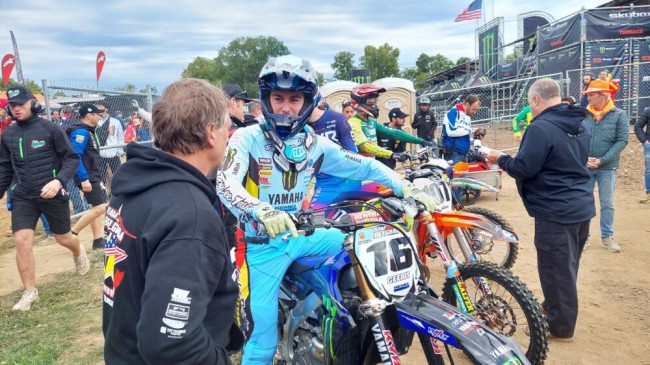 Jago Geerts stole the show with a remarkable 450 debut win against Eli Tomac in the Saturday qualifying races on a rapid Red Bud track!

Geerts style and poise was impressive as Tomac and Seewer charged towards the Belgian who controlled the final laps well – what a rebound from the disappointment in Turkey!

Geerts: For sure I didn’t expect it but this morning I was feeling good on the track and I like the 450. I had a good start and managed to win so really happy with that. If everything goes well I think we can be on the podium.

Justin Cooper dominated the MX2 jumping the big triple every lap with the help of that fire breathing Star Yamaha and only Hunter stretching it out on his Hinda and Farres (also on Star) could do it as well with Cooper easily the class of the field.

Kay de Wolf didn’t quite have his normal speed but suffered a bike issue giving him a DNF and he sat exhausted and frustrated in the team awning beside manager Rasmus Jorgensen. De Wolf will hopefully be back firing on all cylinders tomorrow to show the Americans his true speed. Guillem Farres was a revelation on the Star Yamaha taking fourth with Musquin impressive in third on a 250 after years on the big machine. France have a chance.

Cooper: It was fun with the fans, I’ve never had that many people behind me, it was something else. It was an adrenaline rush. I just have to bring the same energy tomorrow.

Dylan Ferrandis and Chase Sexton went at it in the final moto until Ferrandis got his own leg stuck in the bike and had to stop on the finish line jump to free himself! Ferrandis kept charging and when Sexton fell on the last lap was close enough to take the lead and win for France giving the second gate pick tomorrow for the main races.

Ferrandis: It was very weird, never happened me before I hit the wall and my leg was bent and got stick in the wheel. I had to stop and free my legs. Expectations is easy we want to win, the war already start against team USA we will give everything. Starting second us good because we can see what they do behind the gate 250 or 450.

The track is a lot more hard under foot and very fast rewarding aggression…just the way the Americans like it. They are all on form with Cooper especially impressive, looking like a different rider from the AMA season but Australia, France, and maybe the Netherlands and even a strong Spain will keep the pressure on the home nation tomorrow!