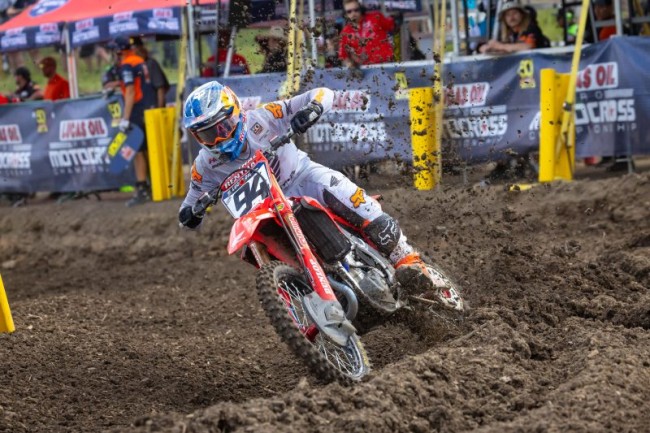 Ken Roczen has been impressive in the first three round of the outdoor season cumlinating in his win in Colorado after showing fighting spirit to hold of EliToamc, something that James Stewart publicly called him out on not doing at Hangtown!

Roczen got a bit of fortune with Sexton crashing on the last lap but it was that fighting spirit that kept him in second and ready to take advantage. It looks like he is a title contender, something that was not looking likely even a couple of months ago after he ended his supercross season early to sort out his health.

But a rejuvenated Roczen says he now feels great and that’s despite the heat and altitude in Colorado: “Don’t doubt me!” he emphatically declared after his victory in the press conference. “I felt really good physically. I’m doing everything I can during the week, off the bike, on the bike, to feel better and get better. I’m also mentally in a really good, content spot. That helps out a lot. For it being a hotter race today, plus that altitude, that means something as well. I’m taking this in the bank. I’m ready to get into the humidity.”

“This win feels… Obviously, Chase went down so it was kind of given to me on that point, but I also had to battle really hard with Eli to stay in that second place which also wouldn’t have happened. I got rewarded today and I’m taking it.

With Roczen’s sensational opening lap speed and now winning his first overall, the confidence is coming back to the German – can he make it two in a ow at High Point? It’s a track that usually suit his style…