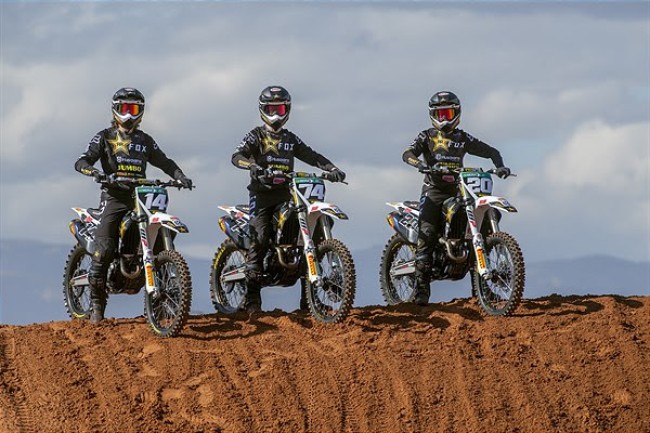 Rockstar Energy Husqvarna Factory Racing’s Jed Beaton and Kay de Wolf have successfully completed their pre-season testing and are continuing their preparations ahead of the 2021 MX2 World Championship start. Following a productive winter spent sharpening their skills and further developing their FC 250 machinery, both riders are now looking forward to an exciting season of racing, starting with round one on May 23.

Travelling to the warmer, drier climate of Spain to ride and train during the off-season proved to be highly productive for the Rockstar Energy Husqvarna MX2 class riders. With Jed and Kay enjoying ample riding time while testing a number of new factory parts, both racers have now finalised the base settings of their FC 250 machines ahead of the highly anticipated season opener in the Netherlands.

Jed Beaton will lead the team into the MX2 World Championship following a strong 2020 season in which the Australian narrowly missed out on third place in the final overall standings. Ultimately placing fourth, Beaton’s season was headlined with his maiden MX2 moto win at round nine, together with him claiming three overall podium finishes and nine moto podiums.

The recently turned 23-year-old has enjoyed two years of progressive development with the team to establish himself as a regular contender for race wins and podium finishes. As such, Jed enters the 2021 season well-placed to challenge for the MX2 World Championship title.

Progressing into the MX2 division for 2021 is Kay de Wolf. One of the most exciting young talents to emerge from the youth ranks in recent years, the 16-year-old Dutchman is ready to begin his third term with the squad after two highly successful years racing in the EMX125 and EMX250 categories.

With the familiar surroundings of his supportive team around him, and with a world-class teammate to draw knowledge from, Kay is understandably excited about the prospect of gaining experience and finding his place among the best MX2 racers in the world.

Joining the team for 2021 is young French racer Maxime Grau. The 15-year-old will compete in the 10-round EMX250 championship on FC 250 machinery, his debut season in the class.

The 2021 FIM Motocross World Championship is scheduled to start in Oss, the Netherlands, on May 23.

Jed Beaton – Rockstar Energy Husqvarna Factory Racing: “My winter training has been really good, really productive and I’m very happy with my bike. It was nice to get to Spain and ride in dry conditions. I tested a few new parts and I made a few small changes but nothing major because I was already really comfortable with my set up. My focus was just on riding and training for the most part. It’s a shame that the start of this season has been postponed a little but when the gate drops I’ll be ready. My goal is to build on what I achieved last year with more consistency and more podium results so that when we reach the end of the season I hope to be in contention for a strong result in the championship. Winning the championship would be the ultimate goal obviously but it’s a long season and the field is full of talented riders. If I can stay at the sharp end every moto, perform consistently, then it would be a great year for me.”

Kay de Wolf – Rockstar Energy Husqvarna Factory Racing: “It’s really exciting for me to move up to MX2 with the same team after two great seasons in the EMX classes. The atmosphere is great in the team and I believe I have everything I need for a strong start to my MX2 career. I’m really hopeful that we have a full season including the flyaway GPs, but I understand that with the pandemic it may not be possible. For the season, my goal is to score points in every race, be consistent and then aim to finish the season in the top 10. It’s not going to be easy, but I have the speed and stamina having trained with Jed and Thomas Kjer Olsen during the last two seasons. I trained with them all the time, riding longer motos while practicing, so I didn’t really need to change any part of my training program for this season. I just spent more time fine tuning my set up, testing new parts and enjoying my time with the team in Spain. My bike is really good and I can’t wait for round one. It will be my first ever world championship race and it’s also in my home country too, so it’s going to be a big day but something that I’m really excited for.”

Maxime Grau – Rockstar Energy Husqvarna Factory Racing: “I’m really happy to have joined Rockstar Energy Husqvarna Factory Racing. It’s a super-professional team and I’m very excited for the future. Moving up to EMX250 with the team gives me a really good feeling and my goal is to feel good on the bike, improve day-by-day, and secure some very good results in the EMX250 championship.”