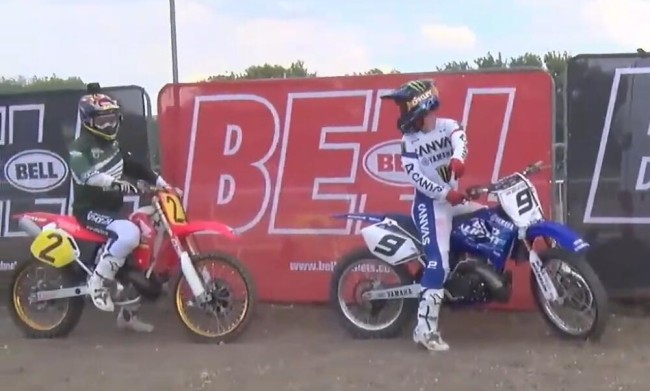 Ryan Villopoto took the holeshot but it was Mike Brown who eventually passed RV to take the win despite the best efforts of Mel Pocock, impressing on the 250 Honda. Brad Anderson was third for England with Neville Bradshaw top Northern Irish rider in fourth ahead of Villopoto. Graeme Irwin took seventh after a first lap crash dropped him to 11th with Nicholls and Osborne finishing just behind the Irish rider.

It was a five way battle at one point for the lead with Pocock passing Mike Brown only to go down and hand the lead back to the ageless American! Brown took the win over the English duo of Pocock and Anderson with Bradshaw keeping N.Ireland in the hunt in fourth with teammate Irwin seventh and Gordon Crockard coming from the back of the field to 13th on his British championship winning 2001 250 Honda. Villopoto, who said he wouldn’t be happy with himself if he was outside the top five, took tenth after stalling his YZ250 in the early laps.

Neville Bradshaw did his bit for defending champions Northern Ireland taking the lead and pulling a small gap over Brown and RV with Brad Anderson, to the delight of the huge crowd, putting the pass on Villopoto to take third on the final lap for team GB, keeping them very much in the hunt for the team victory! Graeme Irwin and Gordon Crockard went 9-10 for NI backing up Bradshaw’s win in a star-studded top ten full of British and AMA champions.

Brad Anderson gave the home fans what they wanted with a brilliant win over Elliott Banks-Browne in the final moto to win the individual overall.

But it wasn’t enough for team GB to take the team win with Brown and Villopoto going 7-8 just ahead of Graeme Irwin with Zach Osborne just about beating Gordon Crockard for tenth as Northern Ireland did all they could to defend their title. However, in the end, it was team USA that got the job done over GB with N.Ireland third overall in a race that had 8 British champions in the top 11!