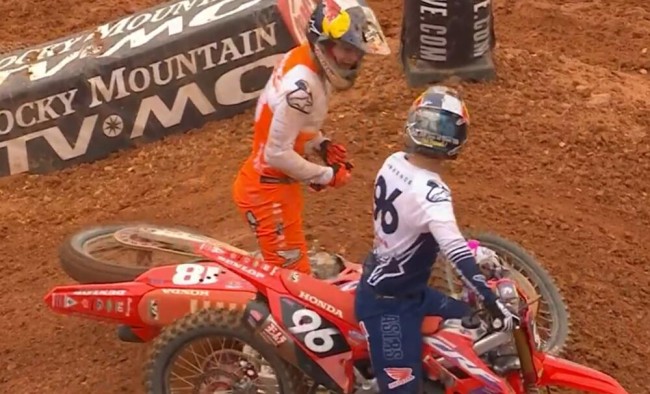 A slick track kept the racing entertaining and the riders on their guard in an exciting pair of main events in Atlanta Motor Speedway, a facility representative of American motorsports oval four wheel racing culture. But tonight it was dirt bikes taking over.

Justin Barcia took the holeshot in the 450 main event from Sexton, Tomac and Anderson as last week’s winner Marvin Musquin crashed on lap one.

Anderson got around Tomac for third then Webb passed Tomac as Sexton and Anderson went by Barcia in an action packed opening two laps.

Then a couple of laps later Sexton, with Anderson still close, washed the front end in the turn, dropping back to sixth, leaving Anderson out front and charging.

Anderson had beaten Tomac in the heat after a great battle and he was feeling the flow as Barcia was the next guy to tip over giving Webb second and Tomac third.

Chase Sexton was on the charge and caught Tomac and Webb but Tomac sensed him coming and made the move on Webb as the intensity rose considerably.

With a minute to go Sexton made the pass on Webb for third and had Tomac was in hid sights but Jason Anderson wasn’t over seven seconds up the road and controlling the race.

Anderson took the win in style to mark his return to form after a tough mid-season with Tomac second and Sexton third, keeping the returning Webb off the podium.

Jo Shimoda took the 250 class holeshot with Hunter Lawrence into second after RJ Hampshire tipped over and Jett third until Jett went down after the whoops on lap two!

That let Craig, who had got a mediocre start just inside the top ten, an easy move on his hyped rival with Craig making his way by Forkner and into third five minutes into tye race.

At the eight minute mark, Hunter passed Shimoda for the lead but Craig instantly followed him through and the race was on but Hunter never cracked and eventually pulled out to win the race as Craig made a small mistake in a fantastic ride for the Aussie.

Behind the leaders, Jett, the fastest rider on the track at the end, got back to third with a penultimate lap pass on Shimoda that had the crowd on their feet as both Lawrence brothers made the podium with Craig a solid second.