Mosiman not happy with Lawrence after take-out! 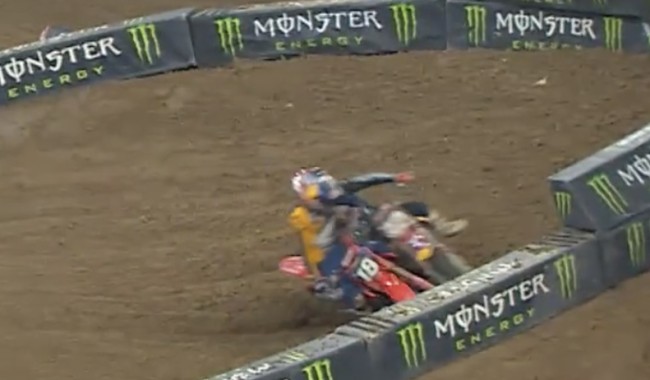 Michael Mosiman was not happy with Jett Lawrence after the Aussie took the Gas Gas rider out for third place in Houston.

Lawrence, who wasn’t happy with his heat race despite a win because he felt second placed Mosiman shouldn’t have been that close, then put Mosiman on the ground in the main ploughing into the side of the American in the turn after whoops.

Lawrence said: “I had to make a bit of a dirty move because I know he is a pain to get around!”

Mosiman said of the move: “I was just a little bit off all day but I brought it together for the night show. In the heat race I was really frustrated; I feel like Jett kind of walked away from me. I made a couple little mistakes but I think I had the speed. In the Main Event, I made some adjustments, got a better start and then there was chaos. I was in third and things were looking good, I got into some lapped traffic and Jett caught up to me and absolutely plowed me. There is blood in the water and it’s going to be an exciting season.”

See the clash at one minute into the highlights below: