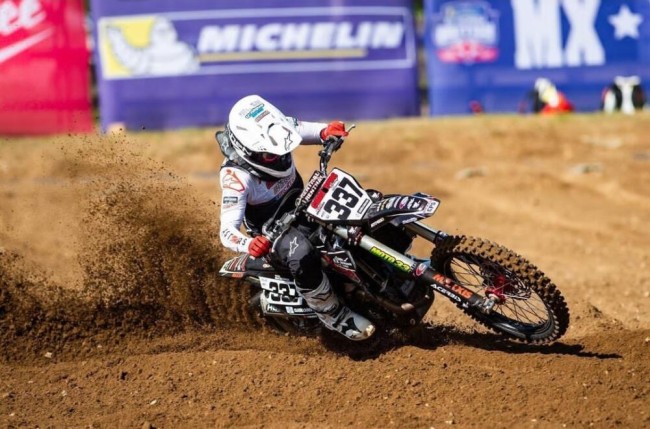 Chambers KTM’s Glenn McCormick has had one of the best season’s of his career at British Championship level, including a pole position at the last British championship round at Whitby. But, despite a strong season, the talented Irish rider has not been selected for the Irish MXoN team that will head to Red Bud at the end of September.

We caught up with Glenn to talk about his brilliant season so far, his EMX Open experience in Italy and that big MXoN disappointment, while he was spinning some laps back home at the increasingly popular Megarry barley Stubble autumn practice facility as McCormick got some corner speed practice in ahead of finishing off the British championship season on a high.

Glenn, you are out doing some long motos in a barley stubble field mid-week and looking really good out there – just like you have all season!

I’m feeling good, it’s been a good year till now. Obviously getting my knee done at the start of the year was a bit of a slow start, I only had three or four weeks riding. It was just about going out and being consistent and pushing for the top ten or more. I had a rough few weeks there, got sick and infections and one thing after another. It’s just pushing on to have a strong finish to the season now.

Do you want to talk about the injury and your comeback from that, your speed was good straight away in the British championship..

Yeah, having had my other knee done, I knew what to do and with the people around me for the rehab, and even for the mental side of things, being prepared, it helped. Just give it my best shot now for the rest of the year and have a good winter.

Chambers Husqvarna, they have really looked after you this year!

They have been brilliant, I obviously joined the team last year and I’ve never met anyone who loves motocross so much. I also got to race the EMX Open in Italy too, I wasn’t quite fit at the start of the year and in a class like that they are all fast, there is no breathing room at all but it was a great experience. It’s dream come true, although it’s not in the GP class, it’s something else. It was great to have the experience of the team there and Tom Grimshaw there who knew what to do just with schedule of everything.

How was it going to Italy, riding that track and doing it on the GP weekend?

It was incredible. Just how compact it is and the atmosphere, you can just really feel the energy from it, everything about it is amazing. How it is all prepped, they don’t really level the track overnight just maybe the take off of jumps and bits and pieces. It was great, you are out on the same day as the GP boys, watching them and learning and seeing where you are at. From that weekend on it was a big turning point for me to get the experience and confidence again. The results weren’t what I wanted, I had a bit of bad luck with issues out of my hands but I feel like I could have had two good results. I just really want to get back to do more, that’s a big goal of mine.

The last British at Whitby you went pole and then almost had the holeshot, the front wheel just didn’t have the grip you needed! Great ride though, you caught back up almost to the top ten.

It’s nice, just even the recognition you get from it and people talking to you, people know of you but just more people start to talk. it was nice, very overwhelming walking into the holding area and all eyes are on you and the pressure is on you, rolling onto the start I never had the option of where to start and it’s not a track to ride on all the time so for me it was hard to gauge where to start, I just had to go off my gut. I did get a good start in the first one and Kullas went around the outside of me and I just said, ‘I haven’t come this far to (come out second) I felt if I can ride how I know how to ride like at a wet day at Seaforde… but as soon as I tucked the front, I could just hear the crowd then i was stuck under the bike and everything was heavy. But I was just like, I can’t give up so I got up and tried my best. Unfortunately it was two weeks before that I got sick so it was a struggle, 15 minutes into the race I was done but I still made up good ground which I was quite happy about. I would like to have come away with two better results, I know with my speed I could have done it.

I have been doing more races there (England) and just riding with those guys and the confidence, it’s really helped me. After Fatcat everyone went to Belgium and I went home to Northern Ireland and I think that was a big learning curve to, I realised I should have been heading to Belgium to practice too, I could notice the difference when they came back with the intensity riding with the GP guys.

So to the negative then, not in the MXoN team despite being in an around the top ten of the British championship all season, how disappointed are you to not be in the team, especially with it being in Red Bud?

I didn’t sleep for a few nights, just more annoyed with the respect I got. I don’t feel I got the respect I should have been given and maybe not told the truth.

There is talk Jason Meara has an illness at the minute, have you heard any talk about you being reserve considering that being with Chambers, you have access to a 250 and 450? Any chance of a last minute call up?

I haven’t got one as of yet! I wasn’t at the Irish on Saturday but apparently it was called out that I was riding but I wasn’t there… I haven’t got any call but I think we all know who will be on the team.

It feels like the last few years you have been so close to going, someone is going to have to be disappointed, John had a great race in the MX2 British at Whitby, you got pole, Stuart broke his wrist, but it always feels you are the one missing out.

Yeah, with a couple of them being injured for a while I thought it might have been different, but yeah, it is what it is. It has happened a few times now and I knew deep down for me to be on that team it would be a big ask, it is what it it.

And next year are you staying with Chambers again? They have done a lot for you the last couple of years.

Yeah, stay where we are at. Everyone is happy, the team is happy. The passion they all have, Tim, I have never met anyone that loves motorbikes as much in my life. Just to be around that, and there is not one person he walks passed in the paddock that doesn’t know him. It’s just a nice vibe, there is no pressure as long as you are giving your best and enjoying yourself, that’s all that’s asked for, I can’t complain, it’s been great.