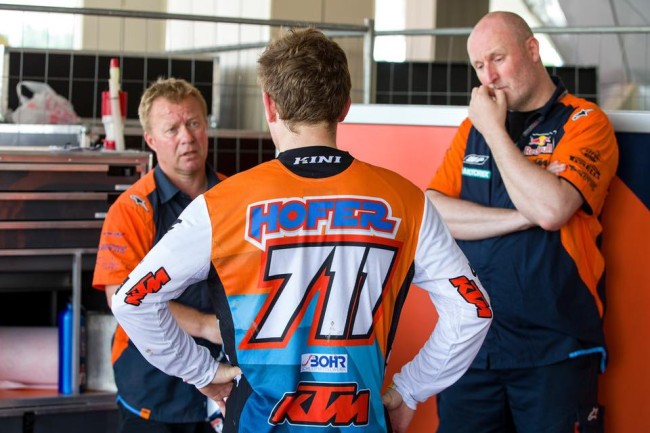 There’s no doubting the talent that young Rene Hofer has and this year will be his rookie year in the MX2 World Championship after signing with the Factory KTM team for the season ahead. Didi Lacher has been working with Hofer for a number of years and has clearly helped Hofer be able to fulfil his potential so far. Both will be hoping there’s even more to come and this is just the start of his success.

Lacher also works with young Swiss talent, Mike Gwerder who three years ago wasn’t able to qualify for EMX125 races, last year he finished fifth in the championship – an amazing improvement and Lacher has clearly been a help.

We caught up with Lacher to discuss both the talents and plenty more.

Gatedrop: Didi, you’ve worked with Rene Hofer for a number of years now. What qualities do you see in him that makes you think he can go right to the top?

Lacher:  2020 we are going into our 5th year. Rene was always a hard worker and is very strong in his head. His riding technique got better and better over the years. I think he has all the characteristics to be a top MXGP rider.

Gatedrop: Rene is obviously working with Joel Smets as well as yourself this year, how is that going so far and is he doing some new stuff with Joel?

Lacher: I know Joel from our riding days and yes, Rene will working with him and me. Mainly Joel works with Tom, but as we train a lot together, we discuss riding and training as a Team. From the training side it is more intense, riding time and speed wise. But that is necessary, because there is much more and longer riding time at the GP’s than in the EMX championships.

Gatedrop: Last year in around July time I spoke to Joel and he said it would be unlikely that Rene would be a full time factory rider but yet here we are! In the end why was the decision made to put him MX2 full time alongside Vialle?

Lacher: This question you need to ask Joel and KTM Motorsport. Pit Beirer and Robert Jonas asked me about my opinion. For me it was clear, that Rene needed to step up into the GP’s. But the team was a kind of question mark. It’s good for Rene that it turned out this way, to be a part of the most successful Team in MXGP.

Gatedrop: Obviously seeing what Vialle done last year, what did you make of his rookie season in MX2 and first year as a factory rider? Did he surprise you a little and are you hoping Hofer can do something similar?

Lacher: We will not look back to 2019 and how Tom did. Tom did great in his rookie season and I think he surprised everybody, me as well. But Tom is Tom and Rene is Rene. Rene will get his time to learn and get used to the GP’s. The most important thing is, that he stays healthy and improves during the year constantly. For me as his trainer, I like to see good riding, good starts and having fun. Then the results will come by itself.

Gatedrop: When Vialle and Hofer are at the track, is there much in it in terms of the lap times – it must be good for Hofer to ride with him?

Lacher: It helps when Tom and Rene practice together. It is more fun for them. But they don’t do lap times and race training all the time. For Rene this is the perfect setup. Training and riding with Jeffrey and Tom is a complete different story than riding in the KTM Junior group. The intensity and speed is way higher, and if Jeffrey goes wide open, you know, that this is a good benchmark.

Gatedrop: In MX2 this year, it’s wide open! Who do you see as being the favourites for the title?

Lacher: Yes, really difficult to say. The season starts at zero and all the results from last year don’t count anymore. Olsen and Geerts I see as the slight favourites. For sure Tom is in the mix as well, but close to them are a lot of riders that can surprise. It will be a great championship and I am really looking forward to it.

Gatedrop: You also work with Mike Gwerder, I mean three years ago this kid wasn’t qualifying for EMX125 races and last year he finished fifth in the series, what would you put this improvement down too and has he surprised you a little?

Lacher: I was not surprised at all, I even was a little bit upset that he lost 3rd place in the EMX125 at the last race. He was always good, but needed time. Before 13 years of age, he never rode in the sand and did no international events. He just had fun on the bike and rode in Switzerland.  For him it was more the pressure and the intensity at the EMX races that were the problem. We worked on that and training with Rene and the KTM Junior Team helped a lot. So he improved step by step till season 2019 with a 3rd place at the Junior 125cc World championship and 5th place in the EMX125 championship.

Gatedrop: How’s Mike looking on the 250cc, sometimes it can be hard to know how rookies will do in the EMX250 class.

Lacher: He is looking good, He rode 2019 some races in Switzerland with the 250 four stroke. Unfortunately he broke his collarbone twice this winter and just stepped into riding at the end of January. He is now with his Team in France and getting back into shape.

Gatedrop: What are your expectations for Mike in the EMX250 series this year?

Lacher: Because of his injuries the first EMX250 races will be very early for him, I think it will be a learning year for him. And if he is around 15th place at the end of the year, I will be happy.