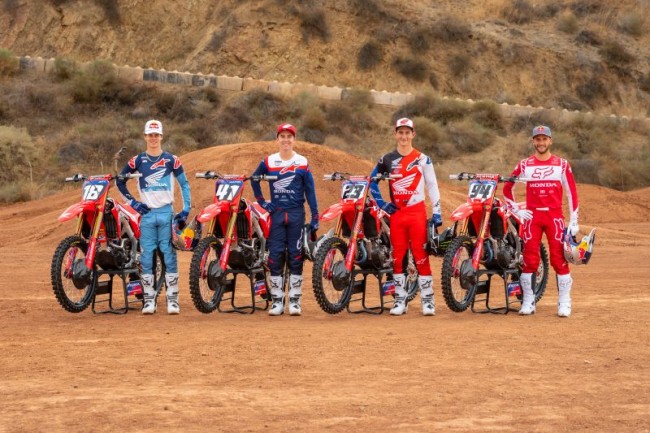 German Ken Roczen begins his fifth year with Honda’s factory team after winning four rounds in last year’s series. “I’m in a good position right now and excited to build on what we learned last year,” Roczen said in the presentation. “I feel extremely comfortable on the all-new CRF450R and will work hard to put it on the top step in 2021.”

Making his AMA Supercross debut aboard the factory 2021 CRF450R is 2019 and 2020 250SX East Region Champion Chase Sexton, who joined the squad for last year’s AMA Pro Motocross series, performing well and winning the final round. “I learned a lot racing the 450 outdoors last year,” Sexton said. “I’m excited to take that momentum into Supercross, and I feel like I can contend for race wins and podiums.”

As previously announced, the factory squad has taken on the 250 effort for 2021, with CRF250R-mounted Australian brothers Jett and Hunter Lawrence prepared to campaign the 250SX East and West regions, respectively. “All of the hard work is paying off,” said Jett, who is beginning his second full season as an AMA pro. “Now, going into the season, I just want to be consistent and ride smart—to ride like a champion and be there for every race.”

Jett’s older brother Hunter missed much of last season due to injuries, but he is approaching the 2021 season in good health and looking forward to a new challenge. “Having this opportunity alongside Jett is great, because we push each other every day,” Hunter said. “Team Honda HRC has welcomed us with open arms and I just can’t wait to get the season underway.”

The first round of the 2021 AMA Supercross series takes place in Houston on January 16.