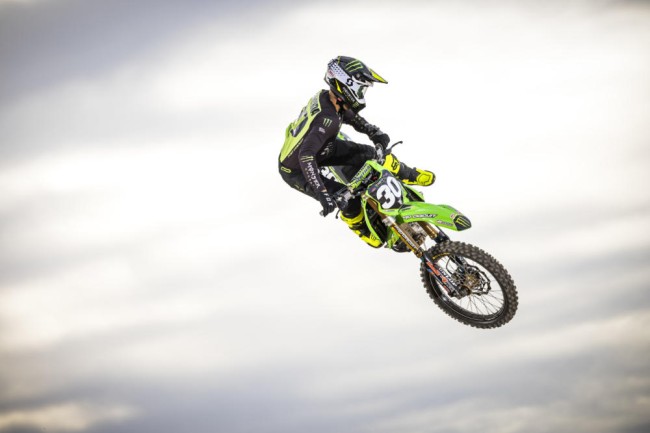 It was a dramatic opening moto in the 250 class with Jo Shimoda, the pole sitter, taking his first moto victory outdoors! Hunter holeshot with Jo and Jett right on his rear wheel but as the race progressed it was Jett who finally got around both riders to take the lead with Hunter now the man putting the presssure on for the lead and a charging Shimoda still on the pace of the two Aussie brothers.

Then disaster struck for Jett, smoke started to appear out of Jett’s bike and a couple of laps later the 250 Honda ground to halt putting the championship leader out of the race!

Hunter re-took he lead but Jo wasn’t done, smelling his first win, he went to work and found his way by Hunter to take the win with the older Lawrence brother bringing it home for second – and he now leads the championship over Jett!

Hunter then admitted he took it slower in the last couple of laps after feeling his engine starting to go away – so some headaches for the technical staff in red between motos! 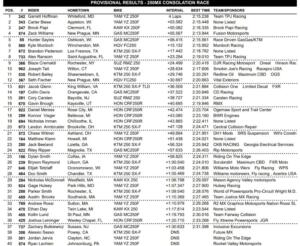 Jett Lawrence took some revenge in race two to come from tenth to first in the first half of the racing, passing Hunter for the lead before checking out on the rest of the field and laying down a speed marker for the rest, including his brother, to ponder for the next seven days.

Hunter Lawrence settled for second but lost the overall in the final couple of laps after an incredible ride by Jo Shimda who got caught in a first lap crash and had to come from outside the top 20! Shimoda rode hard all moto long and with five minute to go caught and passed Masterpool and Kitchen for a crucial third place but Shimoda was so focused on his race he didn’t realise he won the overall until he was greeted by his team after the moto! That third place was maybe the best ride of his career!

Hunter takes the red plate to Southwick but even with the DNF Jett is only seven point behind! 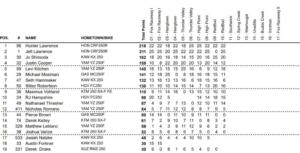