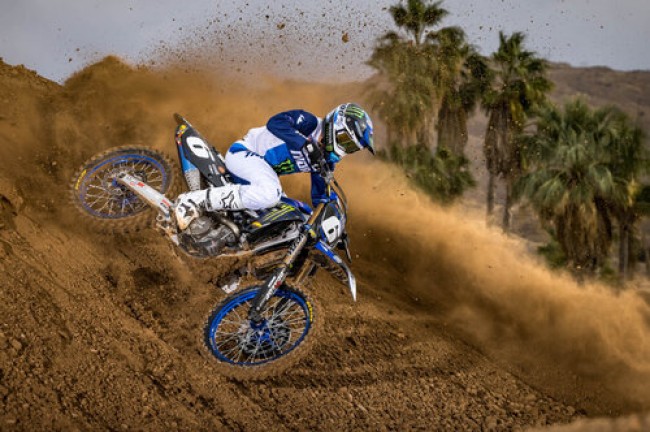 After a lack of depth in the East coast series thanks to a lot of the top factory guys getting injured, the 250 West coast series is coming just in time with a slew of top riders, albeit slightly unproven at bringing home a supercross championship – but that’s what makes this series exciting and pretty wide open!

Jeremy Martin might just lead the list as title favourite due to his outdoor speed and titles but he hasn’t been able to put consistent results together in supercross before, with one good race usually followed by a bad one. He has had the speed indoors at times, so will the move back to Star Racing Yamaha be the final piece he needs to get the starts and stay out of trouble to win this title? Word is he is flying at the test track – but we have heard that before with Martin!

In fact, you can see footage of the former 250 Nationals champ below:

Teammate Justin Cooper will also believe it is his time to win in his third season indoors. Cooper has always challenged but never been the man to beat in supercross with his raw speed more impressive outdoors than in so far in his career. Cooper has also had a couple of injuries this off-season he has had to let heal so he might not be coming in with full preparation but has been back on the bike and will be looking for the title in a big year for Cooper. His learning year’s are over and he recently signed big contract with Star to start winning titles and be the main man in the 250 division.

Jarrett Frye and Nate Thrasher will also be on the Star Yamaha squad and could surprise in their rookie year.

Factory Honda go with Hunter Lawrence for the West with the eldest Lawrence recovering from a shoulder injury in the off-season but is ready to race. Hunter only got to compete in a couple of supercross races and was top ten speed but this will essentially be his rookie year and, although he looks to have the skills and talent to do well, it’s still hard to know where to place the talented Australian in a competitive field.

Carson Mumford will be Honda’s other big player racing for the new FXR Chapparal Honda and has the potential to shine, having been a big star in the youth ranks.

Pro Circuit Kawasaki have three riders on the West Coast, Cameron McAdoo, Jordon Smith and rookie Seth Hammaker. McAdoo and Smith are both fast but can be prone to mistakes while Hammaker is rookie and again, it’s hard to really know what sort of speed or consistency he will be able to bring this season.

In contrast to Hammaker you have Alex Martin, Mr experience is back for more but this time on a Yamaha, after his JGR team shut it’s doors. Martin is always there or there about indoors and out – although the whoops aren’t always the easiest for those of shorter stature indoors! Alex said since he was no longer factory, he wanted the bike with the best engine in the class to help him get up front and went with the Yamaha. If he can nail the starts, expect Alex to feature regularly in the top five – but can he challenge for a title on a privateer team? If anyone can in this field it will probably be him!

TLD Gas Gas have Pierce Brown penciled in for the West but he is not expected to return to racing yet after a knee injury and it is unknown when he will be back behind the gate. Rockstar Husqvarna bring Jalek Swoll and rookie Stilez Robertson but it is hard to know what to expect out of either rider however it underlines the depth of the class, and former Pro Circuit rider Garrett Marchbank can also be added to that list, this time on Yamaha for Club MX after getting let go by Mitch Payton at the end of 2020 – so he definitely has something to prove!

With so many unknowns, rookies and riders feeling this could be their breakout year and a couple that feel it’s their time to win, it should be a season full of unpredictability and some frenetic racing throughout the field!