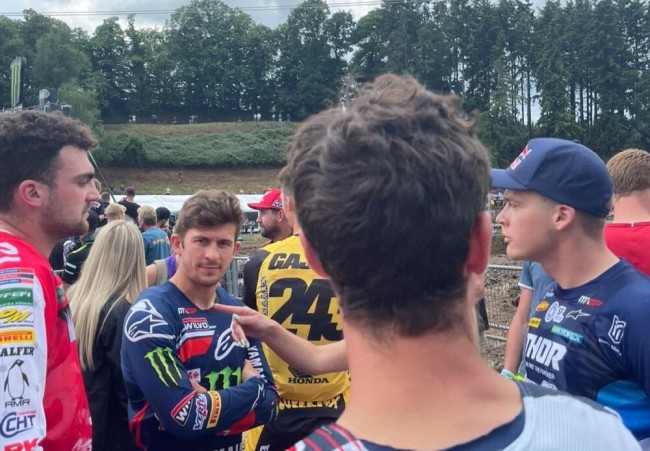 Before the MXGP of France MXGP qualifying race there were quite unbelievable scenes as the riders didn’t take to the start line for the qualifying race. The factory riders were then seen speaking to David Luongo and FIM officials.

The qualifying race went ahead and nine of the riders decided not go contest the race.

After the main races on Sunday the riders give their opinion on what happened after Lorenzo Resta asked the podium riders and Tim Gajser – it seems the riders want more of an input when it comes to track prep.

What happened on Saturday before the MXGP qualifying race…

Seewer: Well, it’s very serious. I mean we didn’t do that just for fun. It was everyone together and not just three of us. I did an interview with MX Vice, if you listen to that you will know the story and what went down. For me I had to turn off my phone today because the internet went crazy, and I just didn’t look at it. For me it’s a bit sad because today it’s already halfway under the table. You know, they try to push it away and this is sad because we really stood up together to try and improve – not to make it worse. We just want it to be better and we don’t try to break anything here, we just wanted it to be safer.

I said yesterday, maybe it was very extreme what we did but all the things together – it came to a point that just came to too much. Yesterday the explosion happened for many reasons. We should have a proper meeting and keep going to try and improve. They should let us riders have opinions and work together instead of just having their way of doing it.

Besides all of that, it was very sad to see today that many officials were very aggressive towards us at the start line. They were just behaving different; I am quite sure next weekend in Germany they will put me at the back. This is the way it is, it’s very sad.

Prado: It’s very sad. I was lining up next to these guys at the back and the officials when they let us go to the gate, talking also quite aggressively to our mechanics. The mechanics are just doing their job, they’re doing what they need to do at the right time.  They can’t treat us bad because we do the best we can to make a good show. All four of us didn’t race yesterday and all four of us are here speaking to you guys after being on the podium even from the outside. This is the reality, we need to be listened too and it was about safety. Look at England, I think if we go back to England we didn’t even see the face of the jumps because the sun was so low. It’s about safety and we cannot ride like that.

I mean in England we didn’t say, we won’t ride… we rode but it gets to a point. You know yesterday made no sense. We talk and we do these things for the safety and for us. Sorry but sometimes we need to get listened too. We are part of the show and the teams are doing their thing. We all need to be treated well so hopefully this changes. Hopefully everyone treats everyone with respect, that’s the most important thing.

Coldenhoff: What can I say, everything has been said. I am fully behind those guys. It’s like they said, it’s exactly like that.

Gajser: Exactly, Jeremy and Jorge said everything. I think yesterday was all about respect so they could listen to us a bit more. Especially when it comes to how to prep the track and all the things. We are the ones that are riding the track, who are risking our lives to go out there. Of course it is our job but at the same time I think we have to have a good relationship altogether to make Motocross grow. I definitely support and I am proud for what we did yesterday.

Gajser: I think that was good because we always had a meeting after a Saturday, after a qualifying race and I think that was a good point. The past two years, the tracks I would say they are prepped okay but many tracks are just one-lined. It is really difficult to pass, they could make the corners were you have like ten lines or if they see that we just use the inside maybe they could clear a bit the outside so we can use all the track. These kind of things, as riders we are riding the track and we can give some good advice. I think they should just listen a little bit more.

On what will happen next…

Seewer: I hope we get listened too, that is what I hope. The very sad thing is that we went to talk and if there was a feeling that they came in our direction then we would have gone in their direction. Then it would have been okay and we could have started 20 minutes later to fix the first turn. They have all the machinery, it would have just took a bit of time. We do this all our lives, we have injuries, we crash and we sacrifice everything for this. We go to bed every day thinking about Motocross, then they say for us to go play golf and that made me angry. Then we said absolutely no, we won’t race.

Gajser: To listen to us. If we say the track is maybe dangerous – if we say to fix that turn, fix that take off, to then do it. Just to listen a bit more.

Listen here on iTunes on below:

We discuss the weekend below in out latest podcast: