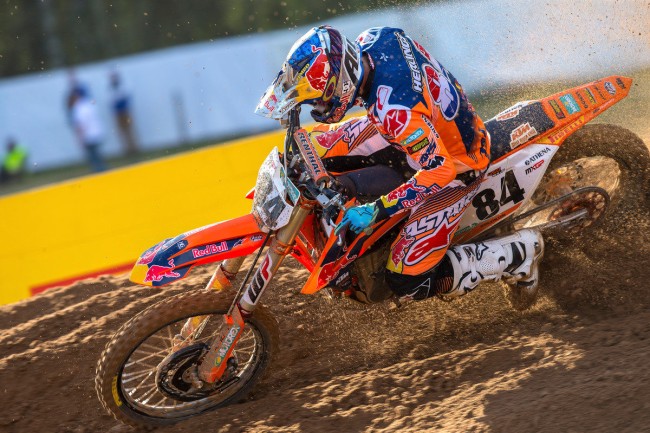 This weekend, the final round of the Dutch Masters of Motocross will be held during the Zwarte Cross festival and it promises to be a great event.

The top Dutch talent will be against some of the best riders in the world such as Gautier Paulin, Max Anstie, Max Nagl, Thomas Kjer Olsen and Thomas Covington just to name a few of the factory riders that will be competing.

We take a look at five things to watch out for this weekend:

Jeffrey Herlings:  With three MX2 World Championships to his name and a huge list of GP victories, ‘The Bullet’ is already the most successful Dutch motocross rider ever! He will be hoping to clinch another Dutch championship this weekend to add to his collection. He has a championship lead of twelve points over Gautier Paulin. No doubt the Dutch fans will be over the fence supporting him this weekend.

Bogers V Kjer Olsen: The battle in the MX2 class is going right down to the wire between Brian Bogers and Thomas Kjer Olsen.  The Dane currently has the red plate but he only has six points over the Dutch HSF Logistics rider. If Bogers can win both moto’s then he will win the title no matter what! So, the Dutch fans will be giving Bogers all the support he needs this weekend.

ICE ONE Husqvarna:  Team owner of the ICE ONE Husqvarna team is F1 driver, Kimi Raikkonen and he is also a huge motocross fan. His team will be action this weekend and will use it as preparation for the rest of the GP series. Max Nagl, Max Anstie and Gautier Paulin will be in action. Anstie is very strong in the sand and has been a revelation on the 450cc Husqvarna. Paulin has an outside chance of winning the title if he can gain twelve points on Herlings.

Battle of the Kays: In the 85cc championship it’s a battle between the two talented Kays for the title. Kay de Wolf and Kay Karssemakers both have a chance to wrap up the title this weekend leaving the other one very disappointed. De Wolf currently has the championship lead but anything can happen, it will be cool to watch two of the most talented 85cc riders in the world go head-to-head.

The track: The circuit in Lichtenvoorde is fast and has some spectacular jumps. As the track is so fast it means the starts are more important than usual, it will be hard to make up the time if you’re coming from the back. Starts could play a part in the championship races this weekend.