Zach Osborne on winning his title! 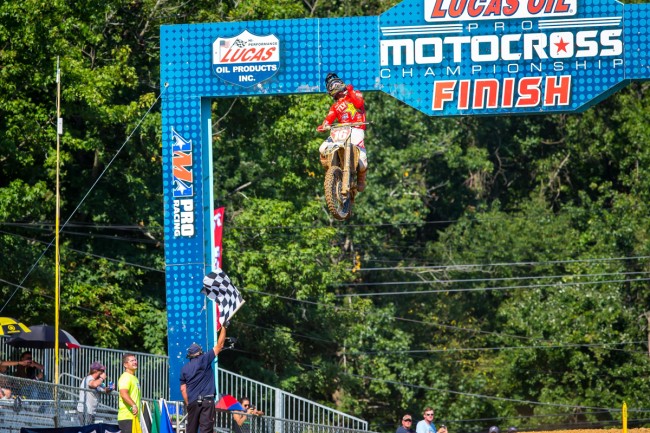 Zach Osborne is now a 2x AMA champion in 2017! The former British champ and GP winner has been in phenomenal form this season and it seemed there was no way he was going to let anyone take the supercross or motocross titles from him.

11 years after leading and then fading to 18th at Budds Creek as a much-hyped rookie, Osborne has literally been around the world and back to where it all started to win the 250 US motocross championship.

Zach is one of the most popular riders out there and still has a strong following amongst GP fans and especially British fans with many messages of congratulations from his former team and teammates in MXGP.

Osborne has shown incredible desire and hasn’t had anything come easy, but training with Aldon Baker seems to have been the final piece of the puzzle for the always fast American to clinch those prestigious American titles.

Zach spoke to the press after the race and opened up on some tough personal issues he has been going through as he has been battling for the motocross title, making his achievement even more admirable.

On the motos
The first moto was tough, I wanted that gate on the inside from five or six weeks ago, I felt good about it. I just didn’t off the gate very good and got to the first turn and was down with a couple of guys. I had to battle back on a track that is tough to pass o, that has been the way of my series, I think the last holeshot I can remember was Hangtown, it hasn’t been all holeshots and rainbows, I have had to battle from the back a lot.

Coming to the second moto they were doing maths at the truck but I knew it would be easier if I just won the moto so I put myself in the position to do so. I just felt really comfortable in the lead on a really rough track.

Osborne wrapped up the 250 title with a round to spare! Pic: Husky

Being a champion
When I passed the mechanics area on the last lap and saw my whole team cheering I got cold chills, it kind of all hit me. This season has come with it’s own set of challenges, not so much racing but personally. I found out I was going to be a dad again on fathers’ day at High Point and then the week before Millville we found out my wife had a miscarriage so that was a really tough thing for us. it’s been more personal and learning how to carry this championship.

I have had the red plate since the first moto of the season, so it’s been a new learning experience for me and just personally some battles, it’s not to bring those to the weekend.

If you know me my wife is a huge part of my program and we don’t miss a beat together, so it was time I needed to be there for her instead of her there for me but at the same time be there for myself as well so it was a bit of a different dynamic.

There is a plan for everything, I am here 11 years later from the moto that everyone knows (Budds Creek leading then fading to 18th) to sit here and be a champion – don’t ever give up on anything you believe in and it’ll happen.

It’s awesome to wrap it up here… it’s a joyous occasion but it’s also relief it feels like a weight taken off.

Racing a 450
My plan was if I won the championship I was if I was riding the 450 at the Des Nations I would ride it at Ironman (final US MX round) but I’m not going to do that, I will just ride my normal 250 next weekend. For next year I have signed with Rockstar Husqvarna to do 250 supercross and 450 outdoors.