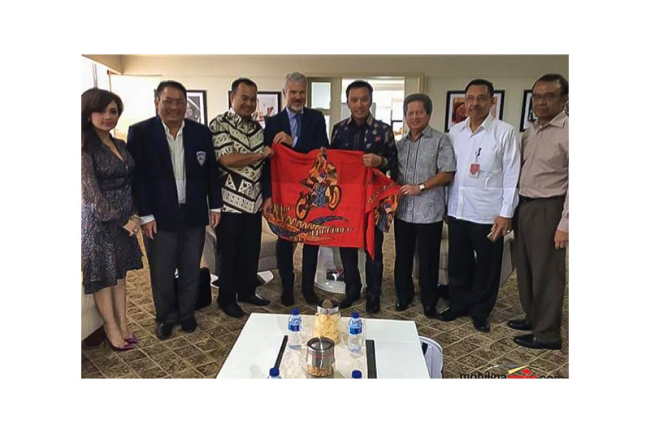 MONACO (Principality of Monaco), 24 March 2016 – Following the announcement at the MXGP of Thailand that the FIM Motocross World Championship will return to Indonesia in 2017, Youthstream Vice President Mr. Luigi Zompetti is in Indonesia to inspect the venue where the event will take place.

Earlier today, March 24th, Mr. Zompetti went to Jakarta in order to meet the Indonesia Republic’s Minister of Youth and Sport Mr. Imam Nahrawi, who expressed his satisfaction to host such a worldwide prestigious event such as the FIM Motocross World Championship for the next 3 years.

“The Government appreciate the opportunity to host this major Championship for the next three years, from 2017 until 2019. We expect this momentum to give encouragement to the young riders in the country,” said Mr. Nahrawi, “Local and national media will pay a special attention to this event and make it amazing because will be broadcasted and enjoyed all over Indonesia.”

“The area where the event will be hosted is one of the main tourist areas of Pangkal Pinan”, said Pangkal Pinang Major Mr. Irwansya. “Viewers can watch the Motocross World Championship with panoramic beach view,” he added. “We aim at increasing the number of tourist arrivals, with a huge target audience.”

“Youthstream is very pleased to be here. Indonesia is a big country and a very important market of over 230 million people,” said Mr. Luigi Zompetti, “the motorcycle market is growing fast here and therefore is very interesting for industries, manufacturers and sponsors.”

Mr. Zompetti will be visiting the area of Pangkal Pinang where the event will be hosted in the next days together with an Indonesian Delegation.