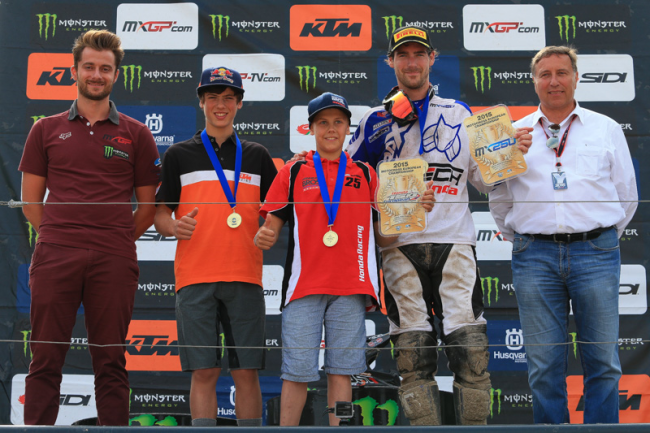 Youthstream is pleased to announce Honda will continue its commitment to developing youth talent in motocross with the announcement of an improved Honda 150 European Championship in 2016.
The championship, which runs as a support series to MXGP, offers a complete development package for 11-14 year olds, nurturing them in the areas of riding style, bike setup, mentality, nutrition and fitness, as well as providing them the ideal career springboard and familiarising them with racing on the World Championship stage.
The winner will again take a step up in the Honda Racing Family with a Honda-supported ride in the European 250 championship in 2017.

The fourth year of the series will see the young riders tackle five race weekends and a pre-season training camp. New for 2016, a second mid-season training camp will also ensure that the youth talent can further develop on what they have learnt in their first races.

Davy Dousselaere, Honda Motor Europe Off-Road Manager
“It is very exciting to see how the championship has progressed since the start in 2013 and how the depth of talent has grown each year. Next season we will have two training camps to allow us to help develop these young riders even more and allow them to put into practice techniques and skills they have learnt without the pressure of a race environment. It is an incredible experience for the kids to become part of the Honda Racing Family and receive guidance from Honda’s grand prix stars. For aspiring racers, no other series allows them to compete on the same tracks as the MXGP World Championship, which can be a valuable springboard in their careers.

Giuseppe Luongo, Youthstream President
“It is clear how important it is to nurture youth talent and help bring more riders to the world stage. The Honda 150 European Championship is great for young riders to gain experience within the MXGP paddock and learn from their racing idols while competing on the same GP tracks. I am very pleased that the championship will once again be supporting the Motocross World Championship in 2016.”