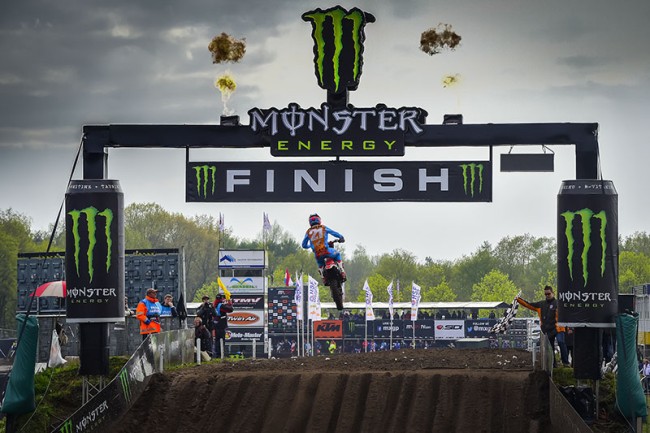 After the first of two back-to-back MXGP rounds in Indonesia where Monster Energy Yamaha Factory MXGP’s duo, Romain Febvre and Jeremy Seewer, continued Yamaha’s double podium streak, the team, joined by Monster Energy Wilvo Yamaha MXGP’s duo of Gautier Paulin and Arnaud Tonus, will travel 1000 kilometers South East of the country to Semarang where they all hope for podium success. If at least two riders make the box inside the premier class, it will be a sixth consecutive double podium occurrence for Yamaha and the YZ450F this season. If one rider makes the podium, it will be a fifteenth podium finish for Yamaha, and a ninth consecutive this season.

In Palembang, just three days ago, Romain Febvre took his first race win since the MXGP of Sweden in August 2017. He set the fastest lap of the Grand Prix and eventually ended up second position in the overall classification. Following the Indonesian Grand Prix, the 27-year-old Frenchman went directly to Semarang where he has focused on hydration, rest and recovery in order to line-up in optimal condition to triumph at the Asian Grand Prix. Should he achieve his goal of winning the Grand Prix, it will be his first overall win since the MXGP of France in June 2017.

With Antonio Cairoli withdrawing from the remainder of the series, Jeremy Seewer is next in line to move up into second position in the Championship Standings. The 25-year-old is currently third in the championship, 9-points clear of Gautier Paulin in fourth, and is looking forward to the Grand Prix this weekend where he aims for more podium success.

Paulin is building towards his early-season form where he was able to uncork four bottles of champagne at four different Grand Prix rounds. The Frenchman is currently 14-points clear of his teammate Arnaud Tonus.

Unlike Febvre, Seewer and Paulin, Tonus has never been to Semarang as he missed an entire year of racing last season due to a double shoulder re-construction. The wide, fast and hard-packed venue is expected to suit his style of riding and should be the perfect location for the 27-year-old Swiss rider to bounce-back from a luckless weekend in Palembang with a podium finish, which if he succeeds, will be a sixth this season.

In MX2, spirits are still high under the awning despite the adversity they have faced at the previous two Grands Prix where Ben Watson broke his hand in Germany and Jago Geerts had a high-speed crash in the opening race in Palembang last weekend. Surprisingly, Geerts bounced back in Race 2 in astonishing fashion as he moved from third to first position before the end of lap-2 and led every lap for 25-minutes before a small fall cost him a second race win of the season. He finished fourth, which was enough for the 19-year-old YZ250F ace to retain third position in the MX2 Championship Standings heading into Semarang this weekend.

Whether teammate Watson will line up is yet to be decided and will be announced on our Social Media platforms on Saturday morning.

Romain Febvre
10th MXGP Championship Standings, 227-points
“We went from Palembang to Semarang because I wanted to use the time in between rounds to rest because it was a heavy weekend in the heat, we all lost a lot of water and kilograms. It is important to take care of our bodies, so I will take it really easy this week and will be ready for next weekend. I will train with Ben Watson because we are staying in the same hotel and then we will be ready for the weekend.”

Jeremy Seewer
3rd MXGP Championship, 327-points
“We’ve been to Semarang, so we know what to expect. The track is really cool, it’s different to the one we had last weekend. It’s faster with more flow and bigger jumps. I liked it last year, but I had a big crash which was out of my hands. I look forward to going there, I think a GP win is possible, but I will go there with own goals and see how things go. Sure, when it’s ‘my’ day, I can win a race, but I will go there to do my best.”

Gautier Paulin
4th MXGP Championship Standings, 318-points
“I really like the track in Semarang, but in Indonesia you never know what to expect. It can be one track, or another track within 30 seconds depending on the weather and other factors. The track was really good last year, so I hope they do a good job although I have heard it is a little smaller this year, but anyway, I will go there looking forward to a good weekend.”

Arnaud Tonus
5th MXGP Championship Standings, 304-points
“I’m looking forward to Semarang. It is only a few days away and after a tough weekend it’s going to be good to be there to rebound. The track looks good! I was not there last year but it looks really fast with a lot of jumps and hard pack, so that will suit me, and I am just looking forward to be there and have some solid races so we can bounce back from last weekend.”