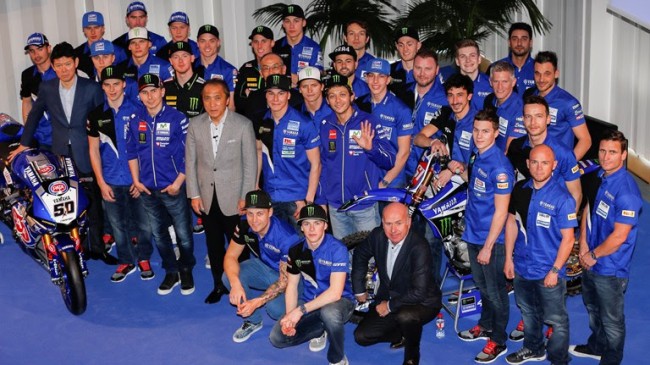 After the winter stop, the wait is finally over; Yamaha will be back in action with the strongest team and rider selection in its over 60-year racing history. Yamaha today launched their official 2016 racing teams across multiple classes both on- and off-road. The 2016 Yamaha Racing Global Press Conference took place at the Diagonal 00 in Barcelona, Spain at the headquarters for Telefónica, who’s Movistar brand is the Factory Yamaha MotoGP team’s main sponsor. The event was hosted by MotoGP commentator Gavin Emmett and saw an impressive twelve teams share the podium to show their 2016 racing colours.

Yamaha’s off-road racing teams were the first to make an appearance in the spotlight. The Monster Energy Yamaha MXGP Factory Team taking the stage. 2015 FIM MXGP Motocross World Champion Romain Febvre, together with 2014 MXGP runner-up Jeremy Van Horebeek will strive for the golden plate again in 2016 with the YZ450FM. They will be joined in the premier class by Kemea Yamaha Official MX Team’s Valentin Guillod, who moves up from the MX2 class and will be guided by Team Manager Marnicq Bervoets. In 2016 Yamaha will continue to be represented in the MX2 class by two strong teams: Kemea Yamaha Official MX Team with riders Benoit Paturel and Brent Van doninck and the Wilvo Standing Construct Yamaha Official MX2 Team with riders Aleksandr Tonkov and Julien Lieber. They are all set to kick off the new season in style on the Yamaha YZ250F. It was then time for the 2016 Enduro World Championship’s participants to become the focus of everyone’s attention. The Miglio Yamaha Official Enduro1 Team will take shape with Mikael Persson and Jamie McCanney as riders, respectively 2015 Enduro Junior World Champion and Enduro Youth Cup Champion.

Seven years after celebrating the coveted Enduro 2 World Championship title with Frenchman Johnny Aubert, Yamaha returns to the highly competitive class with the all-new WR450F. Last year’s Enduro1 rider Cristobal Guerrero moves up to the Enduro2 class, alongside Loic Larrieu, to be a part of the newly established Outsiders Yamaha Official Enduro2 Team.

“Our racing strategy for off-road also reflects our road racing vision. The positive technological advances gained from our premier class of motocross racing in MXGP transfer down through the production race classes and ultimately to

our customers. Our championship winning YZ technology for example, which dominated the MXGP championship in 2015, can be seen in the all new WR450F which is not only now available for our customers, but has also taken our Dakar official riders through the toughest race on earth and will complete the returning to the Enduro World Championships in 2016, the perfect breeding ground for development and also to find new talent for the future.”

Yamaha Motor Europe Chief Operating Officer, Mr. Eric de Seynes added to this: “For us 2016 is looking to be an impressive season with possibly our strongest line up ever across all classes. It is also a special year for us as we welcome back an important partner to our motorcross activities.

“Personally I’m really very excited to see Monster Energy joining us again. As a brand they share our vision and values and they will support us as Title sponsor on MXGP Factory Team as well as main sponsor on all MX Official Teams to nurture and support from the bottom to the top of the sport so there really is no better partner for us to begin this exciting season with.