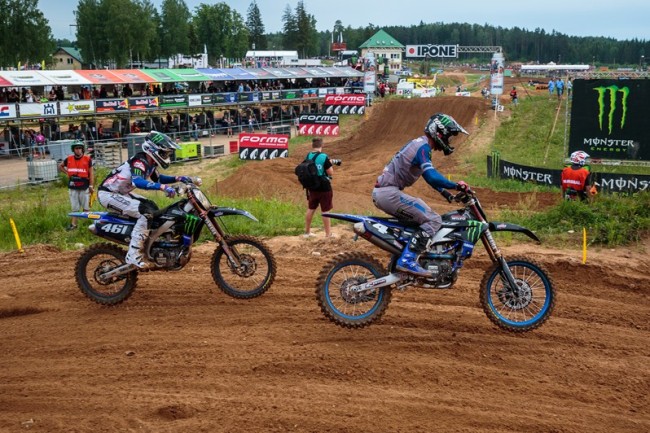 Less than one week after the action-packed Latvian Grand Prix that saw Monster Energy Yamaha Factory MXGP’s Romain Febvre and Monster Energy Wilvo Yamaha MXGP’s Arnaud Tonus miss the top step of the podium despite tying on points for the victory, the duo will chase their first wins of the season this weekend at the tenth round of the FIM Motocross World Championship in Teutschenthal, Germany. After moving up into third position in the MXGP Championship Standings, Monster Energy Yamaha Factory Racing’s Jeremy Seewer looks to maintain his speed and consistency while Monster Energy Wilvo Yamaha MXGP’s Gautier Paulin heads in determined to return to the same form that took him to three podium finishes at the start of the season.

Motivated by the frustration of missing the top step of the podium due to a three-way tie-break at the previous Grand Prix, Febvre and Tonus are eager to get the job done this weekend. Both riders and their teammates have celebrated the German Grand Prix from the podium formerly. Febvre triumphed at the hard-pack and hilly venue onboard his YZ450FM back in 2015, edging out French compatriot Gautier Paulin for the victory. Paulin took his YZ250F to the second step of the podium back in 2011 in the MX2 category, and repeated that achievement in the premier class in 2015. The ’21’ has also stood on the third step of the podium in Teutschenthal for the last two years – ’17 and ’18.

Tonus put his YZ250F on the third step at the MX2 Grand Prix in 2012, while Seewer rounded off the podium at the German Grand Prix at Teutschenthal in 2017 before winning in 2018.

As a native German speaker, Seewer is excited to put on a show for the fans in Germany as he aims to strengthen his third position in the Championship Standings. Chasing the Swiss rider, Paulin needs 2-points to reclaim third in the championship, while both are threatened by Tonus who is on a run of four consecutive podium finishes and is now only 10-points from establishing a place inside the top-three.

After missing four rounds of the championship due to injury, Febvre has finished on the box twice since his return to racing and is rapidly moving up the leader board. The ‘461’ is now 12thin the MXGP Championship Standings with nine rounds remaining, he is 29-points shy of the top-10.

The 2019 MXGP and MX2 World Championships are made up of 18 rounds. The two categories share a calendar, which means the Monster Energy Kemea Yamaha MX2 team will also be in Teutschenthal for the tenth round of the MX2 Championship this weekend where their young star Jago Geerts hopes for a maiden Grand Prix victory.

Geerts, who is currently third in the Championship Standings, managed to peel back 4-points on the rider in second in Latvia last weekend. The 19-year-old Belgian hopes to keep momentum this weekend as he aims to hit new heights, while teammate Ben Watson looks to build on his fifth position in the championship.

Coinciding with the MXGP and MX2 World Championships, the SDM Corse Yamaha EMX250 team is looking forward to the last of three back-to-back rounds with the sixth round of the EMX250 Championship taking place this weekend. The team made up of Rick Elzinga, Caleb Grothues and Gianluca Facchetti will be joined on the gate by MJC Yamaha’s Thibault Benistant, who is chasing the top-five in the Championship Standings. Benistant will have the support of the entire MJC Yamaha EMX125 team this weekend with his teammates, Florian Miot, Luca Diserens and Magnus Smith lining up their GYTR kitted YZ125’s for the fifth round of the EMX125 Championship.

Jeremy Seewer
3rd MXGP Championship Standings, 256-points
“I love Teutschenthal. It’s in Germany and I speak German, so I have fans there.It’s not like my home GP but I enjoy being there a lot. I used to ride in Germany when I was younger, so there will be some cool fans there. My goal has not changed, it remains the same. I just want to be consistent and finish inside the top-five, although I wouldn’t mind being on the podium, but I would be happy with a finish inside the top-five.”

Gautier Paulin
4th MXGP Championship Standings, 254-points
“I’m looking forward to Teutschenthal. It’s hard pack and really rutted. They cannot change it too much, so I am looking forward to going there. My expectation is always the same. I want to be 100% and be up front, this never changes. In terms of recovery, we have limited time, but I do my best every single day to be better and be in shape.”

Arnaud Tonus
5th MXGP Championship Standings, 246-points
“I like the track in Teutschenthal. It’s a good track for me. It will probably rutty and rough if I think about the previous years. Right now, I am looking forward to whatever that is coming. I don’t have any expectations or goals. I will just keep doing what I have been doing all year. Go out there, give my best and enjoy it!”

Romain Febvre
12th MXGP Championship Standings, 157-points
“I am looking forward to this weekend. It looks like it is going to be muddy from the weather forecast, but it could change. I like the track. It’s a hard pack track, so that is nice. I am testing some things on my bike this week, I will try the 2020 engine because it should be better for the start, which was what was missing in Latvia. I know that if I can get better starts that I can ride at the front, so that is the key and that is what I will focus on this weekend, and of course I hope that I am fighting up front with the top guys.”