Yamaha MXGP stars set for round 11 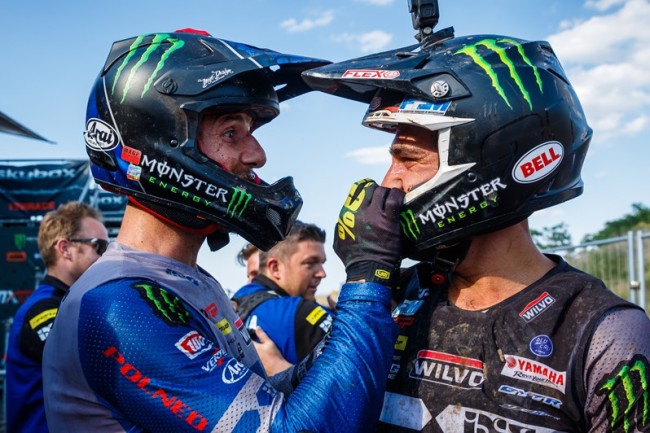 Only 1-point separates Monster Energy Yamaha Factory MXGP’s Jeremy Seewer and Monster Energy Wilvo Yamaha MXGP’s duo of Arnaud Tonus and Gautier Paulin in the battle for third in the MXGP Championship Standings. All three riders and Monster Energy Yamaha Factory MXGP’s Romain Febvre have travelled more than 11,000 kilometers to Palembang, Indonesia, where they will take on the challenge of a new track and venue for the eleventh round of the FIM Motocross World Championship this weekend.

Currently third in the Championship Standings, Jeremy Seewer would be keen to replicate his win here on Indonesian soil back in 2017 where he won the MX2 Grand Prix at the circuit of Pangkal-Pinang. The 24-year-old has won five MX2 Grands Prix in his career and would like to add to his tally with a maiden premier class victory.

1-point adrift of Seewer is Arnaud Tonus and Gautier Paulin who are tied on 288-points for fourth. At the most previous round of the FIM Motocross World Championship, the Monster Energy Wilvo Yamaha MXGP duo made up two-thirds of the podium for the first time in the teams’ history. Both riders hope to replicate that success. Should they succeed, it will be a sixth consecutive podium finish for Tonus, and a fifth in 2019 for Paulin.

Romain Febvre has proven he has the speed to win races since his return from injury back in May. After missing four rounds of the championship due to an injury he sustained at the opening round, the former World Champion has mounted the podium twice and is already on the cusp of the top-ten. The ‘461’ was third at the MXGP of Indonesia last year and is determined to use his ‘Semakin di Depan’ spirit to better that result this weekend.

The MXGP of Indonesia in Palembang marks the first of two back-to-back races on Indonesian soil. The next round – titled the ‘MXGP of Asia’ – will take place in the Central Java district of the country, 965 kilometers south of where we are now, at the circuit of Semarang.

Joining the MXGP riders, the Monster Energy Kemea Yamaha MX2 team have also made the trip with their young stars Jago Geerts and Ben Watson. For Geerts, an unfamiliar venue is an exciting prospect as the 19-year-old looks to further strengthen his place inside the top-three in the MX2 Championship Classification.

Watson will race in attempt to keep his championship aspirations alive despite riding with a fresh scar after his hand was surgically repaired in Belgium only 10-days ago.

Jeremy Seewer
3rd MXGP Championship Standings, 289-points
It was good to have some rest. I was able to go out on the jetski and even do an ice-cream lap (laughs). I am looking forward to going to Indonesia. It is something different and I enjoy it. The first venue will be a new track, and the next venue was really cool last year. The racing is always a bit different over there because the tracks are different and there are less riders. The atmosphere is also different, and I enjoy it. I will go there with a happy mind and see what I can do. The goal will be a top-five with the ultimate goal to be on the podium.

Arnaud Tonus
4th MXGP Championship Standings, 288-points
I enjoyed the weekend break. I went back to Switzerland for a few days and was able to see my family and friends. It was cool to refresh my mind a bit. I am looking forward to going to Indonesia. I have had some great GP’s lately, so the goal will be to keep the momentum and give everything I have got. It will be a hot one and very tough on the body, so I will need to dig deep and give my best.

Gautier Paulin
5th MXGP Championship Standings, 288-points
I had a good weekend off. I had a good week of training, and it was hot, so I hopefully I have adapted to the heat. It was positive and I had a positive feeling on the bike. I look forward to racing in Indonesia. The overseas events are always a bit special, so I am looking forward to it.

Romain Febvre
11th MXGP Championship Standings, 184-points
We had a weekend off, but I didn’t stop riding. I used the weekend to put some more time on the bike and catch back some of the time that I lost with the injury and being sick. I had a really good week of practice and physical training. It was really hot in Europe, so that could help with going out there. I feel good on the bike at the moment, we don’t need to change so much. It suits me well. I am looking forward to going out to Indonesia. I really just want to win, and I hope to win out there.