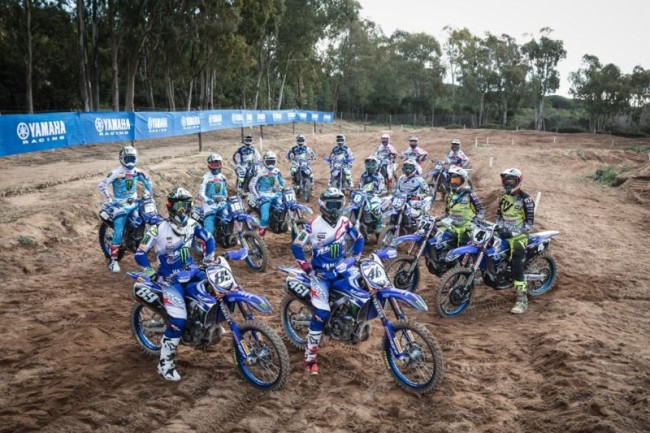 As the new racing season draws closer, Yamaha Motor Europe N.V. has taken a moment between preseason testing activities to gather all of the Official Race Teams together to kick-off the 2017 Road and Off-Road line up. The international racing media were invited to join the Official Race Teams Press Conference on 7th February at the headquarters of the Movistar Yamaha MotoGP team in Gerno di Lesmo, Italy.

Hosted for the third year running by MotoGP Championship commentator Gavin Emmett, the event saw an impressive 15 teams and 41 riders and their team managers unveil their 2017 liveries and Yamaha machinery to the gathered press and partners.

Prior to the teams unveiling, Yamaha Motor Europe N.Vs Chief Operating Officer, Mr. Eric de Seynes took a moment to share his insights on not just the 2017 line up, but also on Yamahas racing strategy and a sales review of Off-Road and Supersport market segments.

It was then time to meet the teams, so Yamaha Motor Europes Rally and Enduro Racing Manager Alexandre Kowalski took to the stage to give a heros welcome for Yamahas Dakar riders. Fresh from a strong outing in the 2017 edition, Yamalube Yamaha Official Rally Team rider Adrien van Beveren was a stand out performer on only his second Dakar, missing out on a podium finish by less than one minute last month to take fourth overall and a final stage win. Xavier de Soultrait was also present at the event, having been one of the key protagonists of the Dakar on a newly developed, customer targeted WR450F Rally that will be soon introduced, and that delivered him a stage victory on the opening days of the Rally. It was then time to introduce Outsiders Yamaha Official Enduro Team rider Loïc Larrieu who will challenge in EnduroGP class and Enduro 2 class rider Jamie McCanney, along with Johansson Yamaha Junior Enduro Team talent Mikael Persson. Larrieu, McCanney and Persson will spearhead Yamahas Enduro challenges this season, showcasing what the WR450F and WR250F are capable of.

Continuing the off-road line up, Yamaha Motor Europe N.Vs MX Racing Manager Erik Eggens shared the strategy for the coming year before making room for The Monster Energy Yamaha MXGP Factory Team, who were present to reveal their 2017 colours. 2015 World Champion Romain Febvre and 2014 Vice Champion Jeremy van Horebeek continue together this season, both in full physical fitness and determined to put the YZ450FM at the sharp end of MXGP action.

Stepping up alongside the Factory Team into the MXGP class from The MX2 Championship comes The Wilvo Yamaha MXGP Team. Wilvo Yamaha will make a real effort for podium glory with the YZ450F in the very capable hands of MX stars Shaun Simpson, who claimed his first ever Grand Prix win aboard a Yamaha back in 2013 at Lierop, and Arnaud Tonus, a former MX2 Grand Prix winner in Brazil in 2014, who is making his very welcome return to the FIM Motocross World Championship after spending the last two years in the AMA Motocross and Supercross Championships in America. Yamaha will still be represented in MX2 with the very capable KEMEA Yamaha Official MX2 Team continuing with the unchanged line up of 2016s MX2 third place finisher Benoit Paturel, set to continue impressing on the YZ250F alongside teammate Brent Van doninck. The inspired pairing are joined for this season by Swedish talent Alvin Östlund. Together all three riders are ready to shake things up in the 2017 FIM Motocross MX2 World Championship.

Returning to Yamaha and hunting for her fifth world title, Fontanesi is a force to be reckoned with in her Fonta Yamaha Official WMX Team. 2016 WMX Championship runner up van de Ven is looking to reach the top step in 2017 with her NoFear NVD Yamaha Official MX Team. Although not present at the press conference, New Zealand rider Courtney Duncan will step up alongside the two with her Altherm Yamaha Official WMX Team as a very real challenger for the title.

Equalling Yamahas Off-Road efforts, the 2017 road racing line up looks set to contend at the top with a wealth of talent represented across the classes. Yamaha Motor Europe Road Racing Project Manager Andrea Dosoli was present to share the high expectations for the coming season. The re-energised WorldSBK Team now has deeper Yamaha Motor Company involvement in the project and a larger technical R&D department, relocated to Yamahas historic World Superbike headquarters at Gerno di Lesmo, adjoining the MotoGP Team base.The media were given an insight into the return of Yamaha to the Supersport 600 class and new YZF-R6, ready to be competitive from the start, and of course the activities in the junior support class with the YZF-R3. Six young bLU cRU riders will compete in 2017 in the R3 bLU cRU Challenge inside the new FIM Supersport 300 World Championship. The young hopefuls were introduced on stage, before giving way to the larger capacity teams.

The next generation of the multi-championship winning R6 was presented at the Press Conference in the hands of The GRT Yamaha Official WorldSSP Team. GRT Yamaha boasts ex-125 and 250 Grand Prix World Championship rider Mirko Giansanti as its Sporting and Technical Director, with Filippo Conti alongside as Team Manager. The team have progressed through national and European championships in recent years before challenging in WorldSSP from last season. 2017 witnesses their assault on the premier Supersport class with 2016 Endurance World Champion Lucas Mahias and Federico Caricasulo at the helm of the YZF-R6.

The Pata Yamaha Official Team WorldSBK were next to showcase their 2017 racing livery, with British rider Alex Lowes returning for his second year with Yamaha alongside new for this season teammate, Dutchman rider Michael van der Mark. The pairing have already enjoyed positive preseason testing alongside the WorldSSP600 team and are keen to arrive in Australia for round one of the 2017 season at Phillip Island to kick off their campaign. WorldSBK siblings the Pata Yamaha Official STK1000 Team return for 2017 ready to do battle with the YZF-R1M in the newly defined European Superstock 1000 Championship. French rider Florian Marino returns for the second year having showed impressive pace from the start of 2016- including pole position in the opening race – before an accident in the second round cut his season short. Intensive training and rehabilitation now complete, Marino is eager to get back to work with his Pata Yamaha Official STK1000 Team and confirm his skill, speed and talent. He is joined by new teammate, Italian rider Roberto Tamburini, the 2015 Superstock 1000 Cup runner up.

The 2017 Road Racing line up wrapped up with the presentation of the team and rider representation for the Endurance World Championship. Beginning with French effort, the GMT94 Yamaha Official EWC Team. The Double World Championship winning squad are out to add a third title to their impressive score after missing out by the narrowest of margins in 2016. Taking up that challenge is a strong three rider line-up that sees loyal GMT94 man David Checa joined by 2008 125cc world champion Mike di Meglio and Niccolò Canepa, the former FIM Superstock 1000 champion and MotoGP rider who joined the team for their spectacular photo finish win at the 12 hour round at Portimão last season.

Last but by no means least, The YART Yamaha Official EWC Team stepped up to complete the Yamaha Racing 2017 Official Team launch. The 2009 EWC World Champions ended 2016 sixth in the four round championship, the highlight being a magnificent fourth at the Suzuka 8 Hours, where they were the highest placed of the regular world endurance teams. For 2017 the squad has another powerhouse squad with regulars Max Neukirchner and Broc Parkes being joined by talented Japanese Rider Kohta Nozane and German youngster Marvin Fritz.

As a test rider for Yamaha, Nozanes participation reflects not just the competitive development of the YZF-R1, but also Yamahas commitment to the development and progression of talented young riders, preparing them for opportunities to participate in significant world championships. For 2017 The YART Team switches to a new tyre manufacturer, beginning an exciting new adventure defined by a long-term cooperation with Bridgestone Tyres. The Japanese tyre manufacturer will become a Factory supported partner in cooperation with the Yamaha Factory Racing
Motorsport Division in Japan and the YART Team. As OEM supplier for the YZF-R1M, Bridgestone is already ahead of the game and ready to fight for victory on-track with Yamaha in 2017.

There was one more surprise for the gathered media to set the tone for the day, as Yamaha Motor Racing Director Lin Jarvis took to the stage to thank media and partners for their attendance and share insight into the 2017 MotoGP strategy for the Movistar Yamaha MotoGP Team, the pinnacle of the wider Yamaha commitment to Motorsport.