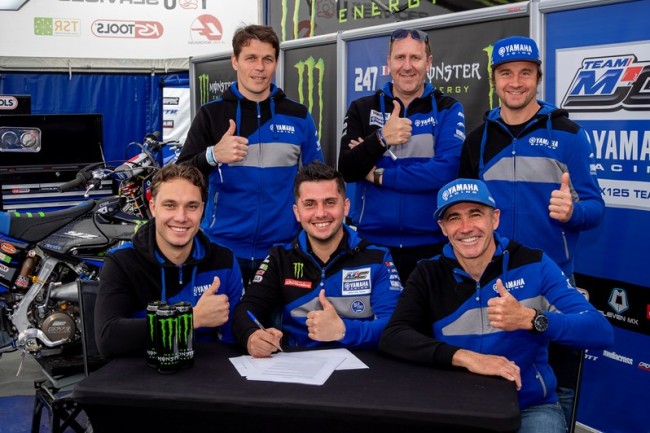 It is with great pleasure that Yamaha Motor Europe N.V confirms an extension of contract with the MJC Yamaha EMX125 Team through 2021.

Yamaha has formed a special bond with the MJC Yamaha EMX125 outfit since the team’s inception into the European Championship back in 2013. Over the past six years, the team has provided many young riders with a GYTR kitted YZ125 and has given each of them the best opportunity to be competitive internationally.

Consistent with Yamaha Motor Europe’s strategy to assist, develop and nurture young talent, the MJC Yamaha team has used its high level of experience and expertise to pave the way for young talented hopefuls. As a result of their efforts, they have accumulated multiple podium finishes and have already achieved the ultimate goal of winning the European EMX125 Championship, which was attained by their French protégée Thibault Bénistant in 2018.

The MJC Yamaha EMX125 team has bolstered the YZ125 bLU cRU Cup program since its introduction in 2015 by including the winners in their EMX125 Championship line-ups for the past three-years. The team comprises the second step of Yamaha’s Off-Road racing pyramid strategy, and works as a stepping stone from national level racing to the European Championship with the latter working as a bridge to the top two tiers of the pyramid, MX2 and MXGP. The recently signed contract with Yamaha Motor Europe will see the collaboration between the MJC Yamaha EMX125 team and the YZ125 bLU cRU FIM Europe Cup project continue for a further two-years.

With the addition of an extraordinary workshop that includes accommodation for the mechanics and riders at the teams’ base in Brittany, France, the MJC Yamaha EMX125 team provides the perfect platform for the next generation of motocross stars.

As part of the ongoing relationship with Yamaha, the team will also be onsite with their full race truck and set-up at the most exciting event of the year, the YZ bLU cRU FIM Europe Cup SuperFinale, where they will allow the bLU cRU riders to view and utilize their facilities when necessary. The SuperFinale will take place at the prestigious Monster Energy Motocross of Nations in Assen, The Netherlands, on the weekend of September 29th, where 120 YZ riders, including two Australian YZ65 wildcard riders, will be present. There are three YZ bLU cRU FIM Europe Cup categories. One for YZ65 riders, one for YZ85 riders and one for YZ125 riders. Each class will be made up of 40 riders that will compete for an invitation to the bLU cRU Masterclass.

Yamaha Motor Europe is thrilled to continue the cooperation with the MJC Yamaha EMX125 team through to the end of 2021 and is excited to see the progression of the young riders over the years.

Alexandre Kowalski
Yamaha Motor Europe Off-Road Racing Manager
“We are really happy to continue with MJC through to the end of 2021. The MJC Yamaha EMX125 team represents the bLU cRU spirit, where they support young riders, they train them and give them everything they need to succeed. Many successful riders have come through the team and remain inside the Yamaha Family such as last year’s EMX125 Champion Thibault Bénistant, who remains on the MJC Yamaha team but has moved up to the EMX250 Championship, and Rick Elzinga who is still an Official Yamaha rider and has been place in the SDM Corse Yamaha EMX250 team. We are pleased to have the Team Manager Loïc Le Foll as a partner as he is doing a fantastic job managing the three young riders that are on the team at present Florian Miot, Luca Diserens and last years’ YZ125 bLU cRU FIM Europe Cup winner Magnus Smith. And we are looking forward to continuing the relationship where together we can provide the best platform for the champions of tomorrow.”

Loïc Le Foll
MJC Yamaha EMX125 Team Manager
“I started the MJC Team six years ago with a talented French rider Nicholas Dercourt. We started with Yamaha as it’s a brand I love and believe in. We finished second in the championship this year behind Pauls Jonass, who eventually went on to win the world championship! After that, we had Thibault Bénistant who was the champion last year. I am really happy to continue with Yamaha Motor Europe for another two years after this year is finished. They have always given me fantastic support which means the team has all of the necessary material and sponsors to be successful. I also enjoy supporting the YZ125 bLU cRU FIM Europe Cup. I think it is an important starting point for young riders to find their feet in the EMX series and to have the best chance.”