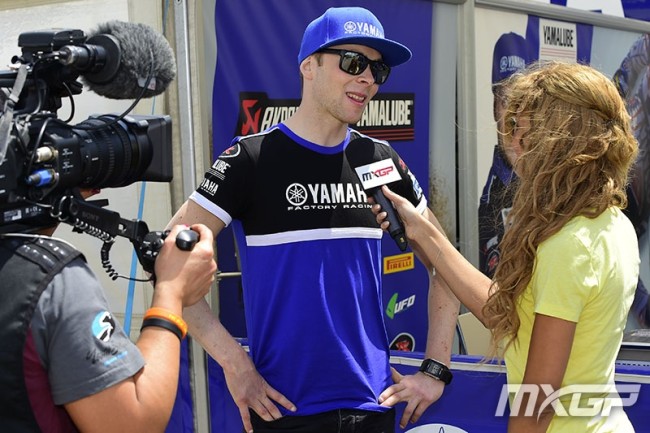 Monster Energy Yamaha Factory MXGP’s duo of Romain Febvre and Jeremy Seewer, and Monster Energy Wilvo Yamaha MXGP’s Arnaud Tonus and Gautier Paulin are excited to head to fast, hilly and hard-packed venue of Orlyonok, Russia, for the eighth round of the FIM Motocross World Championship this weekend. All four riders are determined to keep their momentum from the previous round in France, where three YZ450F riders wrapped up the Grand Prix inside the top-five. Tonus and Febvre finished on the podium and hope to continue celebrating with champagne in Russia, while Seewer rounded out the top-five for the second consecutive time and hopes to maintain his top-five streak. Paulin looks to bounce back from an unlucky weekend and aims to add a fourth piece of silverware to his 2019 collection by making a return to the podium.

The smooth and precise riding style of Arnaud Tonus is well suited to the rock-hard hilly layout in Orlyonok, Russia. It was at the Russian circuit in 2017 that he won his first ever Qualifying Race inside the premier class. The win also marked a first for the Monster Energy Wilvo Yamaha MXGP Team.

With some extra confidence after finishing up the last two Grand Prix rounds on the podium, the number ‘4’ of Tonus is excited to line his YZ450F up this weekend where he hopes to add to his string of podium finishes.

Speaking of podium finishes, Gautier Paulin has had three thus far and is determined to make a fiery return to the box this weekend. The Frenchman enjoyed the view from the podium in Orlyonok back in 2017 where he celebrated the Grand Prix from the third step. He is currently third in the MXGP Championship Standings, 10-points clear of the rider in fourth.

If race results were put on a graph, Jeremy Seewer would have the most exciting curve of improvement. The 24-year-old is gradually building confidence on his YZ450FM and has improved his results at each and every Grand Prix. Consequently, the talented Swiss rider is sixth in the Championship Standings, only 6-points shy of the rider in fifth. He is currently 22-points clear of his compatriot Tonus, who is in seventh position.

After making his return to racing less than 3-weeks ago after a severe ankle injury that required surgical intervention, Romain Febvre’s return to Grand Prix form has been spectacular. The former World Champion suffered from illness leading into the MXGP of France, yet still managed to put his YZ450FM on the box. After a much-needed weekend off to ensure his health has returned to 100%, ‘461’ is confident that if his arms don’t pump up this weekend, he can be on the box.

As the only rider that has defeated the current championship leader in a race this season, anticipation of what is yet to come is building for the Monster Energy Kemea Yamaha MX2 team and their Belgian protegee Jago Geerts. Geerts tied on points for the victory at the previous Grand Prix but was demoted to second as a result of a small crash while pestering the leader in the final throws of Race 2. The 19-year-old star is hungrier than ever for a maiden GP win, and there is a good chance it could come this weekend in Orlyonok, Russia, as it was at this venue that he won the his first World Title, the 2016 Junior 125cc Motocross World Championship.

Geerts is currently third in the MX2 Championship Standings, while his teammate Ben Watson is 3-points off of a place inside the top-five. He is sixth.

Additionally, the EMX250 series will join the premier classes on the coast of the Black Sea at the scenic venue of Orlyonok, Russia, this weekend for the fourth round of the championship. Riding a wave of confidence after finishing on the podium at the most recent round in France, MJC Yamaha’s Thibault Bensistant is determined to remain at the front of the field where he can build on his 10th place in the Championship Standings.

Joining Benistant, SDM Corse Yamaha EMX250’s Rick Elzinga, Caleb Grothues and Gianluca Facchetti are looking forward to making the trip in hopes of putting their GYTR kitted YZ250F’s inside the top-ten. Unfortunately, the young Italian based team will be one-man down this weekend as Ruben Fernandez recovers from a heavy fall at the Italian Championship only three-days ago.

All of the races can be watched on www.mxgp-tv.com, so can the MXGP Studio Show which is filmed live onsite and will feature Monster Energy Yamaha Factory MXGP’s Jeremy Seewer. It will go LIVE at 10:15 (GMT+3) on Saturday 8th June.

Gautier Paulin
3rd MXGP Standings, 218-points
“I have been feeling good on the bike for many weeks now. I have had a good week so far, so I am just hoping for a good trip out to Russia with safe travels. Hopefully the weather will be nice as well. I enjoy the track there. I look forward to riding there where I hope to continue the form I have been working on during the week.”

Jeremy Seewer
6th MXGP Championship Standings, 184-points
“I had such a cool weekend. I raced in Austria and raced in front of a lot of spectators on a really nice track that was like a Grand Prix venue, the same conditions. The weather was good, and it was overall a nice weekend. I am going out to Russia with the same goal. I want to be inside the top-five so I will need good starts and I will try to show my potential. At the moment I am feeling better and better on the bike and I feel I am improving. So, I want to keep improving and then we will see where I end up.”

Arnaud Tonus
7th MXGP Championship Standings, 162-points
“I am feeling good at the moment. It was nice to have the weekend off; I went back home to spend a little bit of time in Switzerland. We head out to Russia on Thursday. I look forward to riding there. I like the track a lot and I hope to keep the momentum and give it all I have.”

Romain Febvre
16th MXGP Championship Standings, 85-points
“After being sick leading into the French GP and then I raced again in Holland on Thursday where I won even though I did struggle with arm-pump a little bit, I decided to take the weekend off to recover. I will be back on the bike this week where we plan to train in France and prepare for Russia there on the hard-pack. I like the track in Russia, I think it is quite similar to what we have in France, hard and stony with some nice jumps and many hills. I hope that the track crew will prepare it well so that we can make passes. If I manage to ride without arm-pump this weekend, I am confident the result will be really good. My main focus is to remain relaxed, so that I do not get arm-pump and if I can do this, I think the podium is more than possible.”