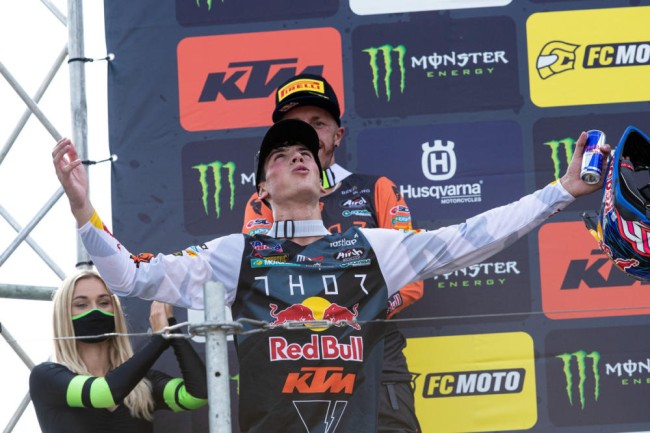 Yamaha Motor Europe have claimed the recent rumours of a sensational switch by double
MX2 World Champion Jorge Prado from a contract containing another three seasons with
Red Bull KTM to the Monster Energy MXGP crew are unfounded. The 20-year-old
Spaniard’s name had been linked with the factory team in the wake of a modest year of
results so far in 2021 for Yamaha and just two podium finishes between Glenn Coldenhoff,
Jeremy Seewer and Ben Watson.

Yamaha were frequently associated with Prado in the last month as the manufacturer seeks
the same kind of success in the premier class that they are currently enjoying with Maxime
Renaux at the head of MX2, and gossip swirled around Prado’s future in the KTM set-up; an
organisation where he has spent his entire career.

“There is a lot of noise and rumours about this rider, but it is not Yamaha’s game to go for a
rider that is signed with another brand,” underlined YME’s Offroad Racing Manager Alex
Kowalski. “That is not the way we want to do things. If a rider is coming to the end of his
contract then that is another game but this is not the case with Jorge.”

Yamaha might be dissatisfied with the season to-date, which has been affected by Jeremy
Seewer’s bout of Epstein-Barr virus and with Coldenhoff also searching for podium
contention consistency. Watson, as the rookie on the squad, has shone with top ten speed
but has also suffered in Russia, Latvia and the recent Turkish double. The Brit currently sits
10 th in the standings and Yamaha have yet to confirm him as part of the Monster Energy
crew with Coldenhoff and Seewer who have deals in place for 2022. The procrastination with
the UK’s sole works rider in MXGP also fuelled the speculation that Yamaha were looking to
change the third member of the line-up or maybe even run two racers on the YZ450FM.

“It’s not completely fixed yet and we will see what happen during the next GPs but the target
is to fix the same rider line-up in both MX2 and MXGP,” Kowalski offered. “Ben is a super-
nice guy and super-loyal to the brand. He’s been with us a long time, won MX2 races for us
and we had the chance to let him step up into a factory MXGP team with a 1+1 contract. We
wanted him to show what he could do. At the moment the season has been quite tough for
him. He’s had some good moments and he’s a fighter. He has everything: he’s an athlete
and the riding style is there but he is lacking a bit still to fight with the big guys of the MXGP
class. He demonstrated some [potential] but we are still waiting for some strong results. We
are not asking him to be world champion or to be winning GPs but to be part of the fight.
Turkey was a struggle but the team is fully behind him and he needs to work to see how he
can improve.”

“You don’t put such a rider in a factory team to then not try to find a solution,” he added. “So
we need to find something to continue to support him.”

Establishing the official trio for the next year or two is just one job on the table. The newly
formed hostettler team that run Arnaud Tonus, Valentin Guillod and Petr Polak could be
changing shape or even stopping for 2022, which means Yamaha’s footprint will be even
smaller in MXGP. “We need to work on it,” Kowalski admitted. “At the moment we have few
satellite options compared to the previous years. Now it is the time to see how we can
handle this subject. Peter Hostettler is very motivated to invest and come into motocross and
improve the level, so we will see. We are ‘late’ in the season but it is also mid-season! We
are working on it.”