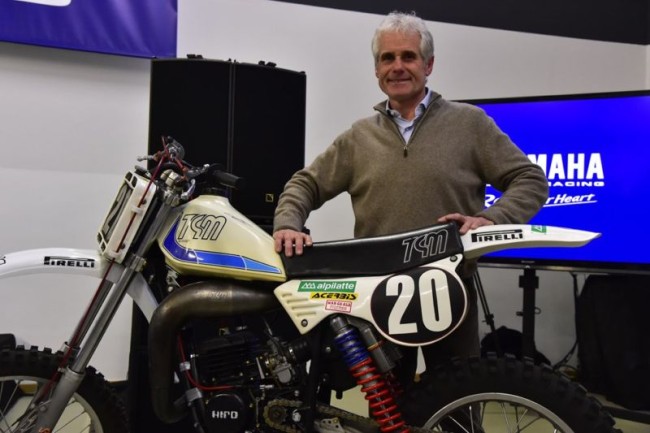 In 1984 Rinaldi became 125cc FIM World Champion: the very first Italian to be crowned in motocross since the sport’s inauguration as an FIM competition in 1957. Rinaldi gained almost a cult following in his homeland for his results and profile but arguably forged an equally emphatic impression in the annals of MX in his role as team manager and team principal as well as a technical partner and development leader for The Yamaha Motor Company in Japan. Rinaldi opened his Yamaha story at the tail end of 1991 and had immediate success thanks to the American duo of Donny Schmit and Bobby Moore; both earning titles and just two of the seven different athletes from four countries to grasp the status of ‘World Champion’ under Rinaldi’s guise.

Of all the chapters in the Rinaldi-YME chronicle, including the evolution of the sport from 125, 250 and 500 classes to MX2 and MX1, then MXGP, two-stroke to four-stroke machinery, the debut of the YZ400F and some important strides in terms of R&D for the YZ line, perhaps the most memorable and arguably dominant phase was the link with Belgian Stefan Everts. An unbeatable working relationship meant a string of six FIM World Championships in six years, in three different categories and all with the superb YZ450FM. Wearing Yamaha/Rinaldi blue Everts also achieved distinction by owning three motos in three divisions in one day in 2003 and claimed 15 of 16 rounds in 2006, raising his GP win tally to a record 101.

“We put the rider in the middle of the project,” 57yr old Rinaldi says, providing some insight to his system. “We start to work, let them test, let them decide, then produce the parts and start the season. We don’t say: ‘here is our GP machine, please use it because we know the durability is good from the previous guys’. We start right from the production machineand I don’t have a desire to ‘push’ GP parts or special parts that I have made. We let them ride, test and judge and we are patient through October and November and prepared to maybe change a lot in February and March and April when results are coming. It is all just experience. We consider the rider as the main element of the racing for us and then comes team, staff, material.”

Always based in Langhirano, Parma, Rinaldi has triumphed over the years and maintained a lofty perch at the top of MXGP thanks to the same backbone of loyal staff. Figures such as Massimo ‘Mino’ Raspanti that came through the ranks as mechanic and has headed the race team since Micheles brother, Carlo, took a step back from the role ten years ago. Assistant Team Manager Giovanni Pelizza is also another to have spent many formative adult years as part of the Rinaldi operation. As well as a dependable structure and technical personnel Rinaldi has also relied on the skills and trust with Carlo – now a key figure behind-the-scenes and dealing with technical partners – as well as second sibling Luca, heading logistics in Langhirano. “To keep it all balanced over a long period is not easy but I spend a long time talking with the people here. It is a groupbut also a family. Sometimes mechanics change teams because of a rider and I’m also ready for that. There has to be an understanding. The group have been together for a long time and I like keeping them motivated and wanting to stay. Sometimes we need to talk more, sometimes less, sometimes need to pay more attention, sometimes less. I don’t want change because I want people who do a good job.”

“My brothers are there because they are the best for the job, not because they ‘have’ to be there and need something to do. Not at all. I am a little bit tough with that. The priority is the manufacturer. I have been paid to meet a result and target and I do everything I can to reach that.”

Famed for his application and focus in delivering results, development, and a positive image for Yamaha, Rinaldi is showing no signs of easing away from the challenge of success in a demanding sport that revolves the globe and involves nineteen Grands Prix, occasional national races and key fixtures such as the Motocross of Nations – where the team have celebrated success in the past two editions with 2015 MXGP Champ Romain Febvre. The name and the acute professionalism of the team are virtually synonymous with that distinctive shade of Iwata’s race colours.

“I’m proud to have been together such a long time and having passed good moments and bad,” Michele said of his Yamaha history. “Even in hard times of the financial crisis we didn’t stop or give up. I’m a little bit of a maniac when it comes to service for my manufacturer. My ambition and goal is to make them satisfied about what we provide. Thanks to good staff I think we can do an interesting and good job.”

“Twenty-five years seems to have passed so quickly and the union of Michele and his team with Yamaha Motor Europe could not have been more exciting and beneficial,” said Yamaha Motor Europe’s Chief Operating Officer, Eric de Seynes. “Michele has helped create some authentic Yamaha legends in the field of racing and his influence on the evolution of the YZ line is also something that cannot be devalued or ignored. He has been Yamaha’s ambassador and bastion in the FIM Motocross World Championship and we could not have wished for a better and more dedicated partner. I hope he is many more years in blue.”

“I’ve been involved in this sport most of my life and the name ‘Rinaldi’ has been around motocross for such a long time and sits alongside some of the greats like Geboers, De Coster, Bayle, Robert and others,” commented Yamaha Motor Europe MX Manager Erik Eggens. “I never had the privilege to race for Michele in Grands Prix but I know that his team – and his work with Yamaha – was revered as one of the best places to be for any rider. It is fantastic that the relationship has reached twenty-five years and for my generation watching Stefan ride and win the way he did is pretty much unforgettable. I also think it is testament to Michele and his crew that they won with each passing version of YZ technology both two-stroke and four-stroke and of varying capacity. They could excel with a rider of Stefan’s experience but then also take virtual ‘rookies’ like David Philippaerts and Romain Febvre to the top of the world and almost did the same with Josh Coppins and Jeremy Van Horebeek in the last ten years. Michele’s work is something that everyone at Yamaha and who likes the brand can be proud of.”

The Monster Energy Yamaha Factory Team will attack the 2017 FIM Motocross World Championship – MXGP – with Romain Febvre and Jeremy Van Horebeek in place with the first round at Losail for the Grand Prix of Qatar occurring on February 25th; Rinaldi’s 26th season at the forefront for Yamaha.