Work in progress with Steven Lenoir 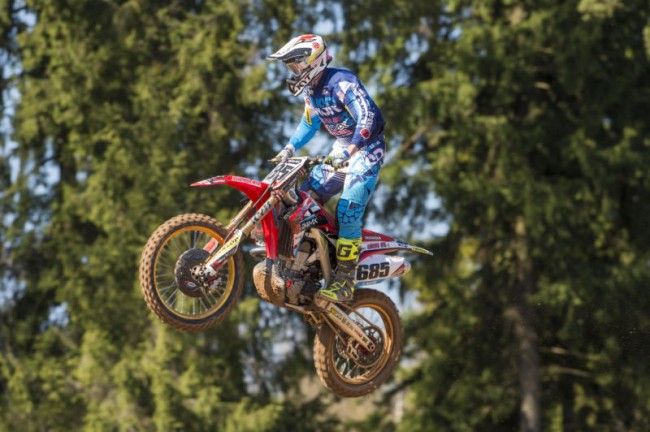 While the MXGP scene is becoming increasingly more global, no other European country boasts the depth of talent France has. Obviously there are Frenchies like Romain Febvre, Gautier Paulin, Marvin Musquin and Dylan Ferrandis right at the top. But fast ‘tricolore’ riders who (re)appear on the international stage tend to enforce the statement above. Enter 24MX Lucas Oil Honda’s replacement rider Steven Lenoir.

When he won the EMX250 title in 2010 many earmarked Lenoir for the top. A serious injury in 2011, when competing in MX2 GPs, threw a spanner in the works. The driven Frenchman relaunched his career in the UK where he established himself as one of the leading 250 riders before moving up this season. Called in by the injury-plagued 24MX Lucas Oil Honda squad Steven proved his potential on the 450 in his first four MXGP races. Nineteenth in provisional standings, equal on points with countryman Gautier Paulin, the #685 has been steadily improving.

Kegums went pretty good for you, right?
Steven Lenoir: “Yes, I think it was one of my best GP’s so far. The first moto had been quite disappointing because I had a very good start but I was riding tense. I made a lot of mistakes on the opening lap, picking bad lines and I ended op with arm pump pretty soon. When you’re not on top of your game you immediately pay cash in MXGP! The second race was a lot better. I rode in 12th for a while and when the faster guys passed me they were only inching away. Glenn Coldenhoff came knocking at the door behind me for the last laps but I managed to hold him off.”

That 14th place in a stacked field was also more significant as a result than the 14th you got in Argentina where the field was not so deep.
Lenoir: “Probably yeah. But the 13-second gap to Tommy Searle who was 9th was also a good indicator. If you’re fighting last year’s MXGP winner, Glenn Coldenhoff, for a place in the top-15 on a track that’s good for him that says a great deal about the current level, it’s so high!”

Where do you need to improve to make the next step?
Lenoir: “There’s room for improvement on many levels. Some of that comes from the experience of riding at the highest level. For example I know that I need to work on my lap times in time practice.”

You explained that some of the modifications you made to the bike didn’t come while actually riding.
Lenoir: “Once the world championship has started it’s challenging for everyone to find the time to test. Especially with the fly-away races and the hectic race schedule. For me even more because I’m of course riding in the UK for the Dyer & Butler team! So after Mexico I had only one training on the Honda. I analyzed my riding from what I felt and the feedback I received from the team. I modified my position on the bike which was a good step. I’m getting more and more comfortable with the suspension as well and there’s a new engine that suits me more.”

It seems most people underestimate the challenges both the replacement rider and his team are facing in a situation like this.
Lenoir: “Definitely. You need time to grow together, that’s how it is if you are not a permanent rider. Maybe if you’re lucky you can jump on someone else’s bike and say ‘that’s exactly what I need’. Since Matiss (Karro) has quite a different riding style that was not the case. Of course I also have limited experience at this level.”

Teutschenthal this weekend should be a track that’s more to your liking.
Lenoir: “Yes I think so, we’ll see. On one hand it’s a hard-pack track that’s better for me than sand. On the other hand I didn’t race a lot of hard-pack on this bike so it’s a matter of getting comfortable. I will try to get a good weekend in Germany, it will be my last race with the 24MX Lucas Oil Honda before I will concentrate on the British races.”

The last British championship round, Canada Heights, was a good one for you. You were only 2 points away from the podium. Do you feel the MXGP experience is helping you for the domestic racing?
Lenoir: “It does in a way. The 450 is a bit heavier than the 350 I race there, so you feel stronger. Both the GP level and how rough the tracks get, make you a better rider. (smiles) And of course it’s a lot better to do an MXGP race than to practice on your own or watch the race on TV!”