Who’s next for Suzuki? 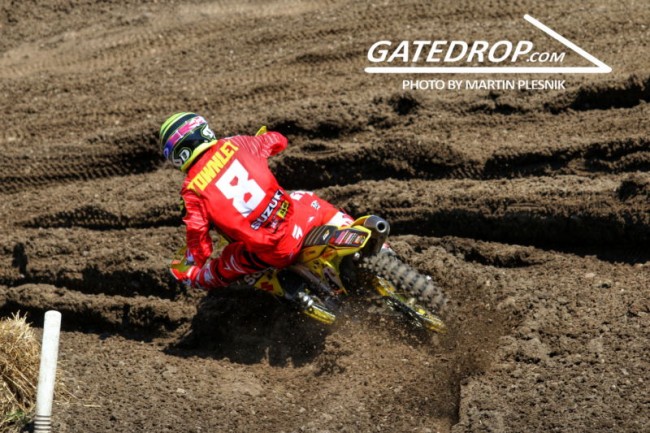 The world Suzuki MXGP team have had a difficult few years mostly due to injuries. Kevin Strijbos has been forced to miss the last three GP’s but should be back in Loket. However, Ben Townley had a big crash last week and will miss the rest of the season, it hasn’t been a good return to the MXGP paddock for the New Zealand rider.

Suzuki have confirmed that they will sign a replacement rider for the rest of the season, we take a look at the possible options Stefan Everts has to choose from.

Tommy Searle: If I’m Stefan Everts the first phone call I would make is to Tommy Searle. Tommy has had a few tough years because of injury but his speed has been good in the 2016 season. His bike on the other hand has let him down quite a bit, despite his good speed he is down in twelfth position in the championship.  However, with a factory and a reliable bike Searle could be a force to be reckoned with, he would jump at the chance to be in a factory team. There are rumours that Everts could sign him for the 2017 season if JVH decides to stay Yamaha so it would be worth trying to get him as a replacement rider. The problem is Searle has a contract with Dixon Kawasaki and that could prove to be tricky as it would only leave Dixon with Brylyakov in the GP’s. But it would definitely be worth a go trying to get Searle in.

Arnaud Tonus: Another option for Everts to consider would be Arnaud Tonus. Tonus has spent the last two years in America after making the decision to go there when he was too old for the MX2 class. However, America hasn’t been kind for the Swiss rider. Between getting injured and picking up a serious virus it hasn’t been a good two years for Tonus. However, things are slowly starting to get better, at RedBud he finished eleventh and sixth for ninth overall which is a step in the right direction. Again, Tonus has a contract with Pro Circuit Kawasaki. But the way things are going he will be lucky to get a ride in USA for next year after not having the opportunity to show what he can do in Supercross. Would Mitch Payton really stand in his way if he wanted to come back to the MXGP paddock? I doubt it but Tonus probably feels like he has unfinished business in America.

Tanel Leok: The Estonian Express has been riding a standard KTM in some of the MXGP World Championship races this year and has showed some pretty good speed. The 24MX Honda team who have also had a lot of injuries were close to finding an agreement with Leok to step in but it didn’t work out. The experienced rider would find it hard to say no to be a replacement rider at a factory team and he isn’t getting any younger so it would probably be his last chance. Leok would do a decent job for Everts and the Suzuki MXGP team for the rest of the season.

Filip Bengtsson: The Swedish rider is already racing the MXGP races with the Castrol Suzuki outfit. He has just returned from a shoulder injury. If Everts wanted Bengtsson to be his replacment rider it could probably be easy enough to do as he already rides a Suzuki so because of this don’t be too surprised to see it happening.

Jens Getteman: The Belgian has only rode the last two rounds of the MXGP World Championship after moving up from the MX2 class. Jen’s is riding a privateer and standard KTM but has showed good speed, I have been impressed. Jen’s best result is twelth which isn’t bad going in such a stacked class. If he has caught Everts attention in the last two GP’s then he could certainly be an option as the potential is there for good results.

Todd Waters: Another option for Everts could be to turn to Australia. Todd Waters is currently riding a Suzuki over there and is going for the MX National title. When Todd left the GP series at the end of last year he praised the series and said that one day he would like to come back. As he is going for the MX National title it could be tricky to get it done but Todd is a guy who probably deserves another shot at the World Championship. If Australia is a path Everts wants to go down then Dean Ferris could also be considered, he also has GP experience.

Graeme Irwin: It’s never going to happen but we want an Irish rider in the MXGP paddock! Hopefully one day Irwin can get a full time ride, he has the speed!