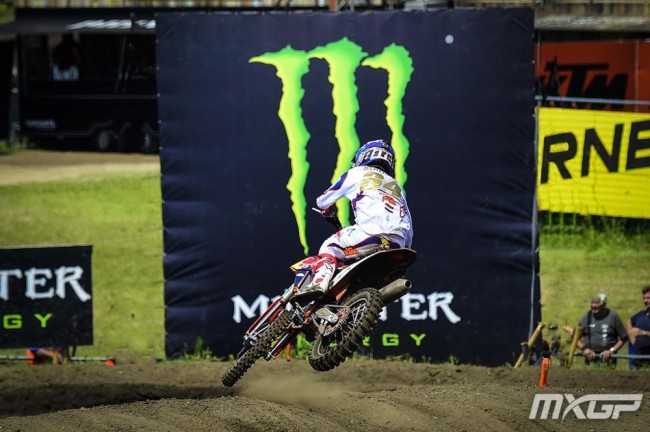 Jeffrey Herlings: It is simply unbelievable the bad luck that literally hit Jeffrey Herlings this weekend and even more unbelievable that he still won the first moto! The guts and determination displayed by Herlings despite a fractured shoulder blade is simply jaw dropping and will be as much of his legacy as his mesmeric speed when he retires. This is is truly a special rider doing very special things and , while he may not end up with a chance of getting the world title record at the end of his career thanks largely to injuries, Jeffrey still has to go down as one of the greats and maybe even the fastest of all time in some people’s minds.

The passes he put on Gajser, Febvre and Coldenhoff were a mix of raw talent, speed and ruthless determination to win that moto for his home crowd but the pain on his face after the race told the real story of the suffering that went into that victory. It will be devastating for Herlings if this injury costs him another world title despite the fact he didn’t do anything wrong and was just in the wrong place at the wrong time. Hopefully he can ride in Loket and stay in this title fight.

Herlings said: “What can I say about today? I had high hopes and wanted 1-1. I had a great start in the first moto but the start device did not disengage immediately up the hill and I did not jump as far as I usually do out of the waves. The rest is history. I had a lot of pain but thought I’d keep going to try and get 4th or 5th. I saw I was still able to catch the guys so I started passing them even though I could barely hold on for the last three laps. I have a small crack in my shoulder blade and I still don’t know how bad it is. We had a scan and it doesn’t seem too bad. I don’t have any pain now but racing a dirt bike is a different story.

Brian Bogers: This was a brilliant second moto for Brian Bogers. The Dutchman goes under the radar a lot but this was a reminder of his speed and ability – and the kept Gajser and Prado in his sights for most of the moto too! Bogers deserves a lot of credit for keeping his fighting spirit and rides like this are a reward for his determination and no doubt brilliant for his confidence to remind himself and everyone of how fast he can go.

“It was nice to show what I could do today and score some decent results,” admitted Bogers. “I felt good on the track and I like the sand, so it was good to put two races together and show what I can do. It was a shame to crash in race one, but even finishing 12th wasn’t so bad. Race two was much better. A great start and then I ran third for quite some time, right until the end. Tony and Romain came by but to finish fifth was a great result and I’m feeling much better in myself, so overall this was a really big step in the right direction.”

Arminas Jasikonis: The best story of the weekend! After his awful crash last year at Mantova Jasikonis is back in the top ten of MXGP racing, the toughest class in motorcycle racing, in only his third GP back! It’s a remarkable achievement and a brilliant testament to the mental toughness of the Lithuanian who has some incredible resilience and amazing determination to come back from an accident that would have left many never stepping on a bike again. I think it’s safe to say the entire motocross world is happy for Arminas Jasikonis right now.

A delighted Jasikonis said: “I’m really happy with today and there are many positives for me to take away from here. It’s nice for me to be back near the front and also for the team as well. They have supported and believed in me so to repay them with a strong result like this is great. With the team we have been working on starts but I would say today my reactions weren’t quite where they needed to be. In race one I was able to make a lot of passes in the first few corners, which is also another positive step. From here the goal is to continue to be consistent and keep pushing and working towards the front of the field.”

Jago Geerts: This was Jago Geerts back to his best! Two brilliant moto wins when he needed them most in order to get back into this world championship fight. Along with the front three in the championship giving up some points Geerts couldn’t have timed his win any better and he did it with calmness and no mistakes under pressure. This is hopefully the big turning point in Geerts season and he can now really attack and challenge for his first world title.

Geerts said: I am really happy with how it went today. The first heat was really good. I was second in the start and then on the third lap, I made a pass for the lead. From there, I could ride my own race and kept the pace for the whole moto to take the win. I was really happy with that and then in the second heat, I got the holeshot and had a good battle with (Kay) de Wolf, but I still got the win. It’s good to finally be back on the top step of the podium. Now I will try to do the same in the next races.”

Kay de Wolf: This kid is special! 16 years old and he almost won his first ever GP in only his fourth race at this level! De Wolf’s talent is undeniable and he looks to be the next generational talent after Herlings coming off the impressive dutch production line. No fear, all heart but backed with outstanding natural ability, De Wolf took his first ever podium and showed to himself most importantly that on his day he has the speed to win at the highest level already.

De Wolf said: “It’s been an unbelievable day and to stand on the podium and lead a race at my first ever home GP is just amazing. I’m so happy and proud of myself and what I’ve achieved. For sure it was a shame to have a small crash in race two but it’s another learning experience to be up front and once I got back on my bike I could ride freely with no pressure. My team have been so supportive, and my bike is just amazing. Today has been a day that I’ll never forget. Incredible.”

Latest Podcast alert! We discuss a packed weekend of racing from the Oss MXGP including Herlings getting landed on, Geerts and De Wolf starring in MX2, Everts getting his first EMX250 podium plus Roczen’s impressive second moto win at Millville!

MXGP from 23 seconds in