Who impressed: MXGP of USA 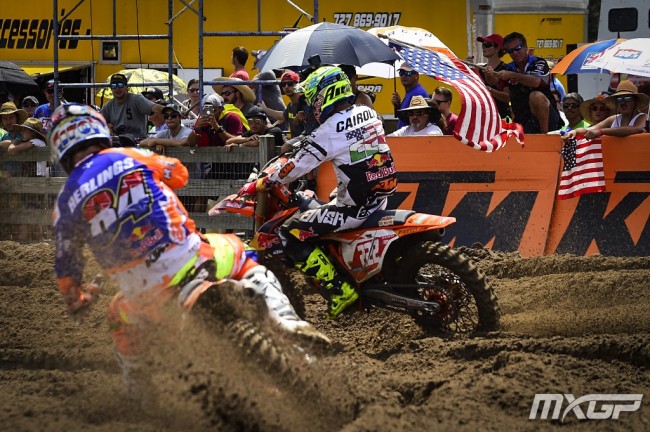 Jeffrey Herlings: He was excepted to win and he delivered! Despite starting outside the top ten in race one Herlings stormed back to second and even caught Tomac slightly but not quickly enough with the laps running out so Herlings decided to save his energy for moto two. It was just as well, because it was another big battle with Tony Cairoli with two leading GP riders separating themselves from the rest of field! Herlings quickly got into second after starting outside the top five, passing Tomac in the first turn, and kept the pressure on Cairoli before he made a mistake in the last five minutes, handing Herlings his second win in the USA in eight days. Herlings has gained more respect in the States in those eight days than he had in the previous seven years!

Herlings said: “I was behind Tony and was waiting until the last couple of laps. I knew both of us would be tired but I didn’t want to pass him too quick and I was waiting for a mistake. He had a small crash and handed it over to me. I’m happy with the 2-1, some good battles with my teammate and I hope we have plenty more. Now for my home GP next weekend.”

Antonio Cairoli: The Italian was five minutes away from winning the USGP and his ninth world title! Cairoli laid up in race one once he got into third then went for it when he got the holeshot in race two, showing that only he could give Herlings something to think about as the track got rough. Cairoli displayed some serious speed to hold Herlings off and pull away from America’s best, Eli Tomac, but that one mistake put the championship party on hold for one more week – but what a rider this man is!

The Italian commented: “I did my best to close it today and I made a mistake but this is part of racing and also my condition is dropping a little bit since the beginning of the season whereas as Jeffrey is the opposite way and is in a good place. I am a fighter and always want to fight back. I hope I will make it in the next GP in Assen, which is a track I really like, and hopefully clinch the title in the first moto, and then after that have some good battles. Together with Jeffrey we have showed that we have some good speed lately and we are ‘there’ most of the time.”

Eli Tomac: Things weren’t looking good for the US champ on Saturday as he was way off the pace, but a smoother track combined with some better settings saw Tomac show his speed in moto one as he holeshotted and sprinted early to take the win. Tomac admitted with great honesty that he just didn’t have the pace in race two of Cairoli and Herlings as the track got rougher, but second overall was still a good end to the year for the American champ who turned his fortunes around big time from Saturday to Sunday.

The 450 US national champion said: “Yesterday we just weren’t on the pace but the two-day format worked in my favour to have time to feel comfortable with my settings. The sandy base threw us at first, but we found some solutions this morning; warm-up went well and then I knew that with a good start I could run with them. The first moto I got out front early, put in some fast laps and had a good rhythm. I got to third fairly quickly in race two, but those two guys out front were setting a hot pace and I lost contact; there were a couple of sections where they were doing things I just didn’t feel confident with, so third was all I had in me that race.”

Kevin Strijbos: We all know how talented the veteran Belgian is and he showed it again in Florida. He was quick on Saturday and finally got a good start on Sunday to take a fifth in moto two, after stalking Paulin the entire motos. Strjbos is still looking for a deal in 2018, but if someone can unlock his potential on a regular basis, they have a great rider on their hands. Strjbos said: “I think I was third after passing Jeffrey Herlings but I didn’t put up too much of a fight when he passed me back as I knew conditions would be very tough. The pace was really high in the beginning and I haven’t been used to running that speed so when I was behind Gautier Paulin, we didn’t push too hard and I knew I could run that pace. I just tried to keep with him and not do anything stupid and that was how the race went. I made some mistakes but no one was too close behind me so I was happy to bring it home in fifth.”

Gautier Paulin: After a very, very scary crash in race one the Frenchman fought hard in race two for fourth, fighting both Herlings and then Eli Tomac in the early stages. Paulin didn’t let Tomac get too far away either despite feeling a bit beat up from that massive prang in race one! It’s good to see the Frenchman push hard and show what he can do despite the humid condtions.

Paulin said: I felt good at this track but two crashes in moto one made it really hard for me to secure a good overall result. My first crash came after landing from the big quad jump. The dirt was loose there so I went over the bars. I got back up but somehow I could not focus on the race and ended up crashing again and bending my bars. Luckily, I avoided any injury. In moto two I had a great start and pushed hard for fourth at the finish. It was really the best I could do as I also felt I was running out of energy.