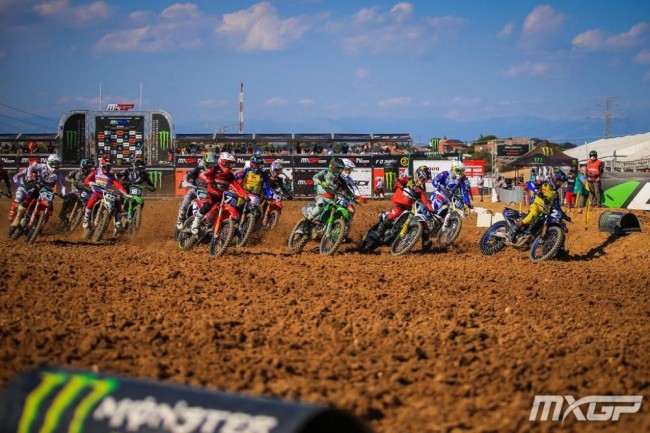 Just whenever you stated to think that the EMX250 championship battle was a foregone conclusion, Mattia Guadagnini has other ideas! The Italian is really on a roll now and dominated the latest round of the EMX250 series. 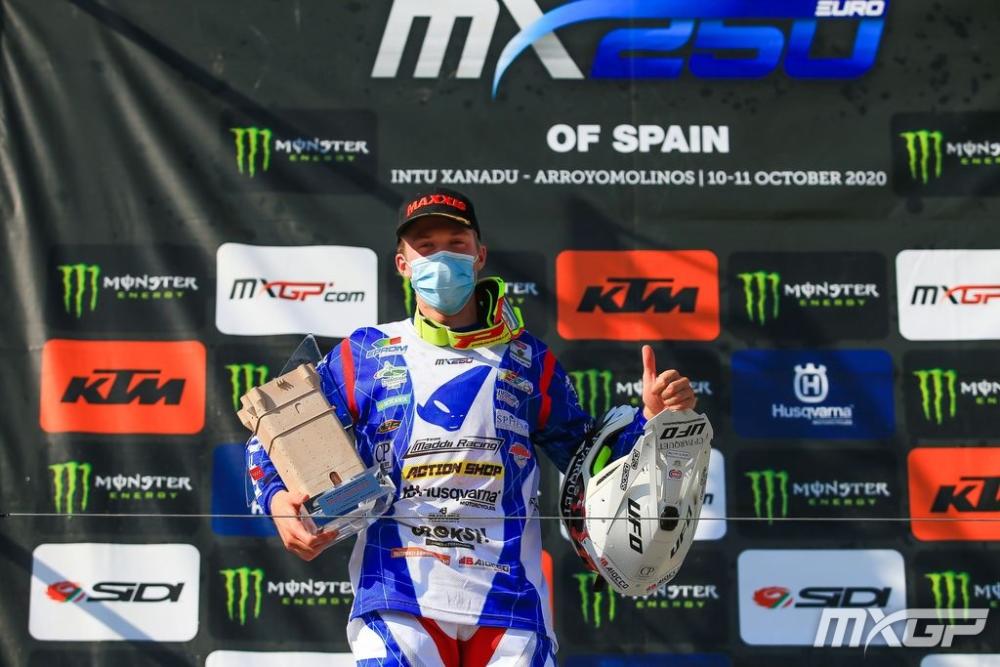 At the beginning of the series Guadagnini was struggling with his starts but those issues seem to be behind him and when he gets away at the front he’s very difficult to stop. He won the moto’s with a margin of six and eight seconds respectively. He’s now got the points gap down to eighteen with two rounds left at Lommel. It really could go right down to the wire! Rumours are that Guadagnini will head to Factory KTM next year for his rookie MX2 World Championship season – with that team and equipment behind him he’s got a huge future in the paddock.

There’s no doubt that Kay de Wolf has the speed but he’s been putting himself in bad positions lately with bad starts. The young Dutch sensation has also been pushing hard recently to work his way through the pack which has led to crashes. However, in Spain he showed what he can do with solid starts – it makes life much easier. 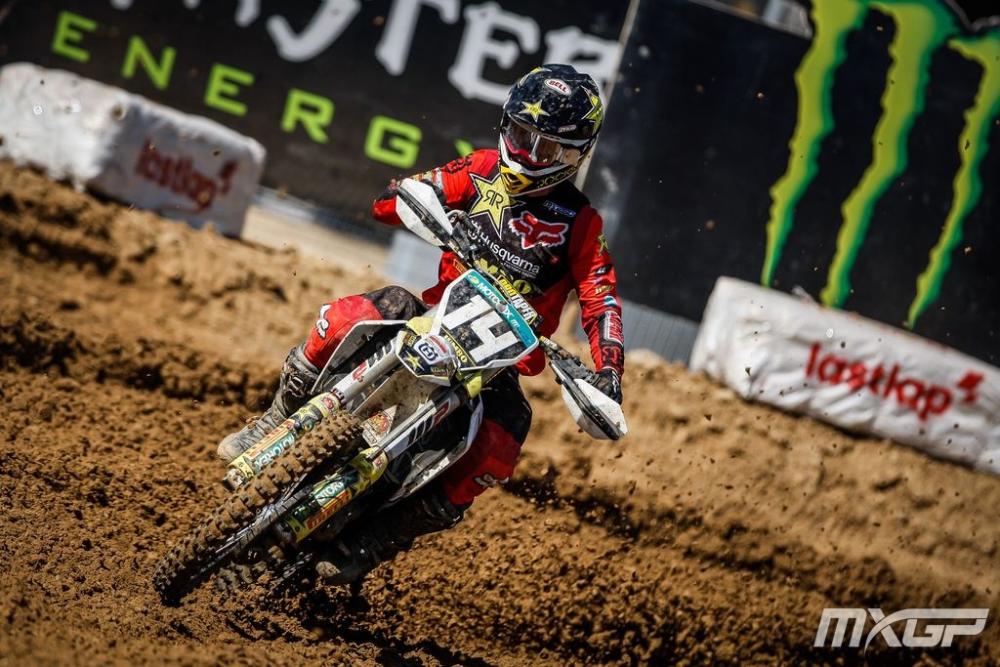 The recently turned sixteen year old went 2-5 in the moto’s to end up third overall and at a track you wouldn’t put down as one of his favourites. De Wolf rides with a lot of style and flow and is showing he’s an all rounder. His main weaknesses are his starts but if he improves on them he could battle for a win at Lommel. It was recently announced that de Wolf will race the MX2 World Championship in 2021 and it’s going to be exciting to see him mix it with the best in the world.

Since making the switch from the AMA paddock to the GP paddock, Lorenzo Locurcio has been improving at each and every round. If it wasn’t for his bad starts in Spain he’d have probably been on the box.

Coming from way back in the first moto, Locurcio managed to get back up to sixth which was a solid recovery ride. In the second moto he made life easier for himself as he was inside the top five and he ended up second just missing the overall podium. With two rounds to go in Lommel it’s going to be interesting to see how Locurcio performs in the deep and gnarly sand.

One rider that’s showed good speed this year is Oriol Oliver during his rookie year in the class. The one thing he has needed to improve is his consistency as he couldn’t seem to put two good moto’s together. That all changed for him at his home round of the series though. 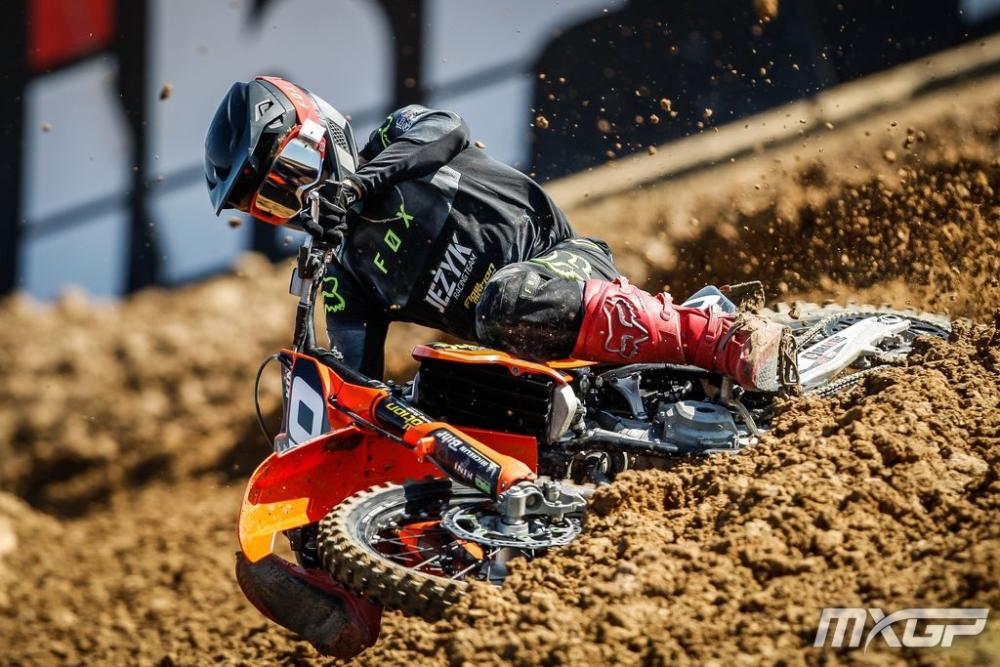 Oliver went 9-6 in the moto’s to secure sixth overall. That’s the first time he’s managed to put two top ten results together so he’ll be hoping it’s a sign of things to come. The young Spaniard has a lovely smooth style and is lovely to watch. In 2021 there’s no reason why he can’t be at the front on a more regular basis.

Last year young French rider, Axel Louis decided to make the jump up from the 85cc straight to the 250cc which isn’t an easy transition. Louis is part of the Honda 114 Motorsports setup and Livia Lancelot clearly sees something in him.

Racing such a tough class, Louis is clearly learning lots every time he races the competitive class and in Spain he was impressive and had his best results yet. Clearly he liked the hard pack rutted circuit as he went 14-8 for eleventh overall. Going into 2021 those are the sort of results he’ll be looking for consistently.

After being pretty much unbeatable at Faenza, Andrea Bonacorsi would have been disappointed with his performance at Mantova but he well made up for it in Spain. The Fantic rider didn’t win a moto but went 2-2 to take the overall win to extend his championship gap.

With three rounds remaining at Lommel, Bonacorsi has a comfortable forty-two points lead in the race for the championship. The Italian is also fast at Lommel as he was close to winning there a couple of years ago so will be looking to end the season on a high and win the championship in style. For 2021, Bonacorsi is expected to stay with Fantic but will move up to the EMX250 for a new challenge and he’ll want to be a front runner in that class as well.

Young Estonian talent, Meico Vettik really does continue to impress this year and is transforming himself into an all round rider, he’s comfortable at hard pack and sand tracks which is obviously a good skill to have. 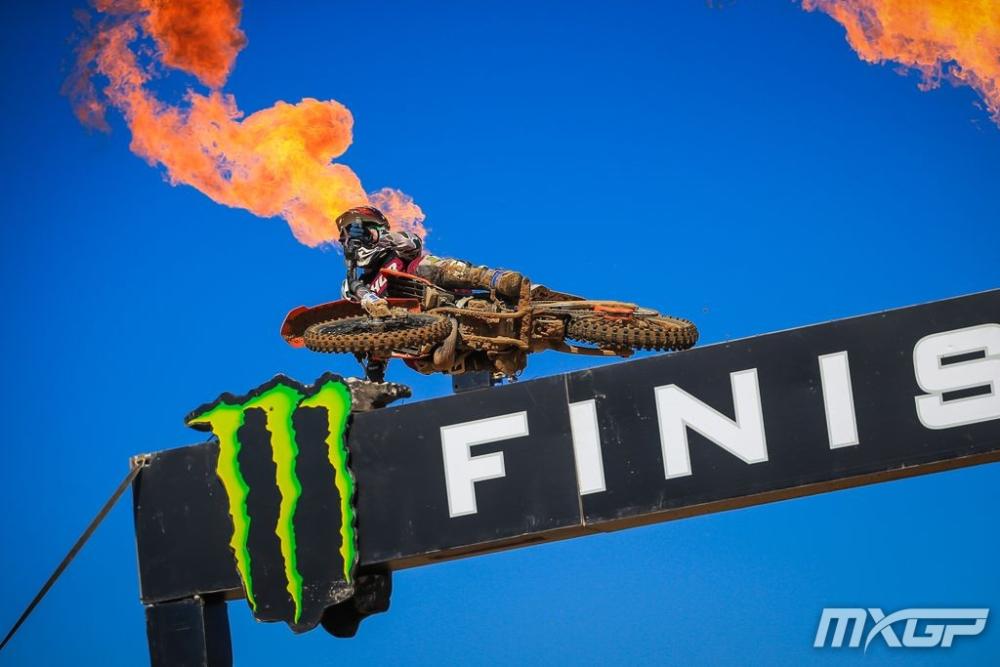 In the first moto, Vettik led the whole race and despite a late race attack from Bonacorsi was able to hold on for the win. Unfortunately, in the second race he was buried down the pack down in thirteenth after the first lap. At a track that was difficult to pass on it wasn’t ideal but he stayed calm and worked his way up to an impressive fifth which was good enough for second overall – another podium in the bag!

It’s important to be consistent and David Braceras has certainly been that this year in the EMX125 championship as he’s never too far away from the front. At his home GP he stepped it up a notch and was clearly motivated to put in a good result.

3-3 in the moto’s meant Braceras ended up on the podium in third overall and he’s also third in the championship. Excelling at the hard pack tracks it’ll be interesting to see what his pace is like at the rough Lommel but he’ll be hoping to hold onto his third place in the series.

A crash half way through the first moto really cost Andrea Roncoli in Spain as he was in seventh and dropped down to tenth before finishing ninth. But it was all about his fantastic performance in the second moto. 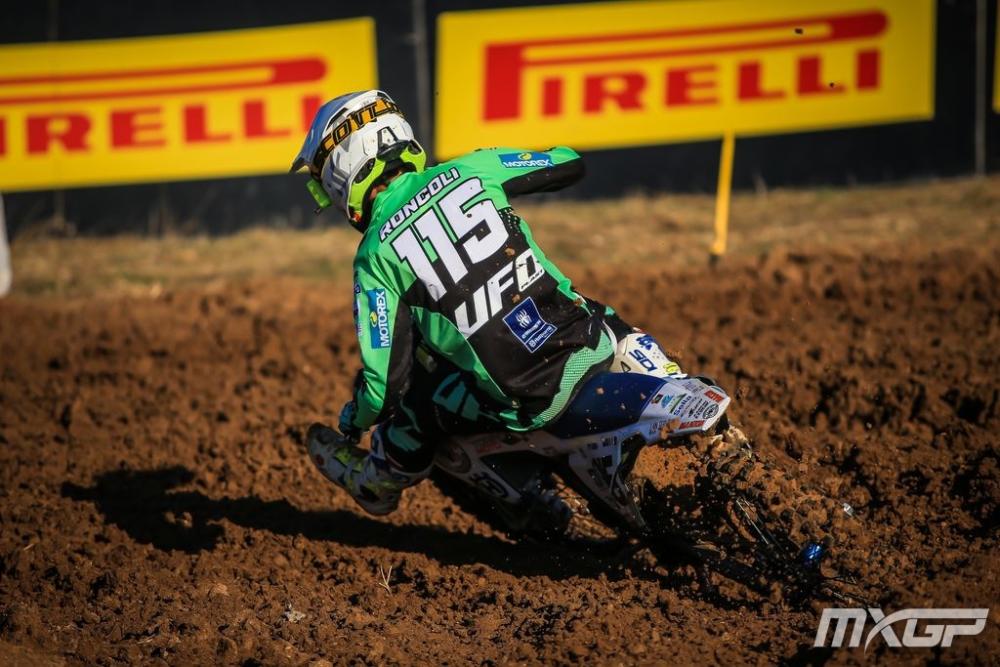 Roncoli took the holeshot and cleared off at the front to take the first EMX125 race win of his career. It’s not often a rider will win a moto and actually be off the podium but that’s what’s happened with Roncoli. He can be happy with the way he’s riding though as he’s really improved a lot this year and it’s nice to see a privateer run at the front.

Coming into the season, Saad Soulimani was expected to be a front runner and especially at the hard pack tracks but consistency hasn’t been his strong point. Spain was much better for the VRT KTM rider as he had two good rides in the top ten.

MXGP of Spain ended🇪🇸 with 7/6 in the races. Not happy cause i take two bad (really bad) start🤦🏽‍♂️, i gave everything to comeback with the front guys but in race two i was 5th and one lap before the end i broke the gearbox while I was back 1 sec behind the 3rd and 4th😫 I finished as I could without jumping😤. i know with better start i can figth for the win cause the speed was there. Back to work this week for lommel👊🏽. thanks for the support❤️ 📸 @mxjuly @team_vrt_officiel @ktm_official @ktmfactoryracing @motorex_powersports @wp_suspension @michelinmotorcycle @flyracingfrance @ride100percent @semcmoto @100percentmoto_france @nrmoteur @louis.iribarne

7-6 in the moto’s was good enough for seventh overall and he looked comfortable at the sharp end. Being French, Lommel could be quite the challenge for him but riding the rough sand track will only help him improve his riding.