Who impressed: MXGP of Qatar 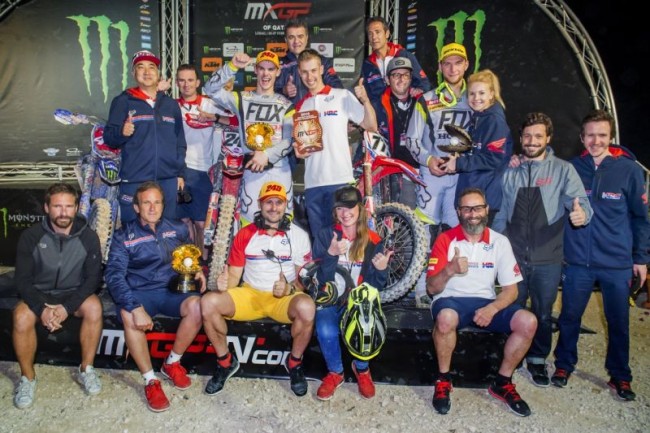 1. Tim Gajser – The Slovenian stunned the world with a devastating display in Qatar. Smooth, and unhurried, Gajser calmly got to the front in both races and controlled the gap. His poise and confidence at the front in his first GP in the class was the most impressive aspect of his performance. We knew he could be a top contender on a 450 but to dominate straight away shows mental strength as well as his natural ability on a 450.

2. Tommy Searle – After two years of injuries Tommy Searle came out swinging in Qatar with seventh overall. He didn’t get the best of starts either but his times were impressive. Tommy said himself after the race that he was one of the fastest riders on track, so his confidence is well and truly back. With a couple of good starts, it will ne interesting to see what results Searle can get.

3. Tony Cairoli – With not much riding in the last few weeks and no pre-season races under his belt the eight-time world champion still managed a fifth overall and ran towards the front of the pack in both motos. It was a big challenge for Cairoli who hasn’t raced in top condition for a while and is no longer the world champion. But when the gate dropped it was classic Cairoli making the best of a bad situation. The Italian will now be confident that he is in a good position to go for his ninth world title.

4. Glenn Coldenhoff – Coldenhoff had not had a good pre-season, complaining about arm-pump but in Qatar he was on the pace and mixed it with the top five in both motos. Coldenhoff eventually finished ninth overall but he showed he has the pace on the factory KTM and demonstrated be was not afraid to fight Carioli either by putting a couple of passes on the Italian. This was an impressive step up by the Dutchman after a tough few weeks and will have done wonders for his confidence.

5. Ben Townley – OK, eleventh overall isn’t great on paper but from where he was on Friday Ben Townley showed a lot of improvement in 24 hours. The Kiwi, racing his first GP since 2011, had a bit of a baptism of fire but on Saturday he was on the back of all the heavy hitters and very much on the pace. Stefan Everts mentioned he just wants Ben to get through the first five rounds and ease into the championship, before really coming on strong mid-season and on this eveidence that advice may be perfect to keep the determined Townley from going for too much too soon.