Who impressed: MXGP of France 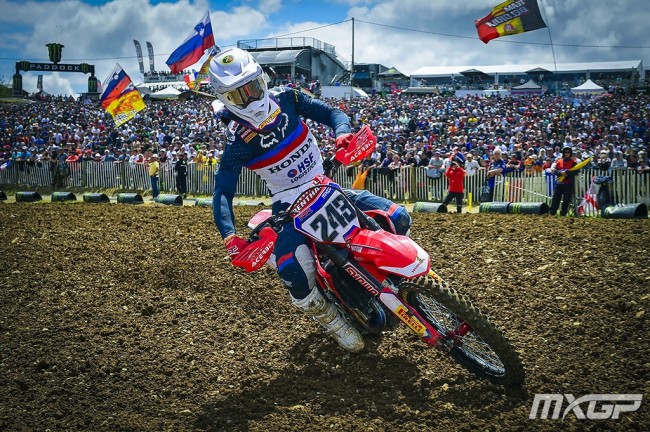 Tim Gajser: It was the perfect performance from Tim Gajser in France two was and seemingly under complete control in both motos. Gajser rode aggressive in the opening lap of both motos to get himself into the top three early but from there he rode calmly with an assurance that he had more pace than anyone else and controlled both motos once he took the lead.

Gajser appeared to have more speed when he needed it but never really had to use it, it was almost Cairoli-esque as he put himself in the right position and attacked when he needed too but never rode out of his comfort zone when it wasn’t required. This was a classy performance that puts Gajser right back in the championship hunt just ten points back from Cairoli in the title chase – and another hard pack track in Russia awaits in two weeks time!

Gajser said: “I’m really happy how both days went. I was having fun on the track and even though it was rough and sketchy in some places, it was still enjoyable to race on. In the first race, I took a little time to pass the guys in front of me before getting the lead and making a gap to control the race. In the second moto I clipped the gate and almost went over the handlebar off the start but I recovered and near the back it felt like. I made some passes to get near the front and then settled for a couple of laps in third before making a strike to get out front. I’m just really happy how things are going at the moment and I hope to continue this momentum into Russia. I am having fun on the bike and I am enjoying putting in the work with the rest of Team HRC. We have a great environment that is helping me this season and it is such a great feeling to win these races and reward the effort that everyone is putting in.”

Romain Febvre: It was a great day for Romain Febvre who dealt with a lack of fitness and some residual pain in his ankle to still make the podium! Febvre showed impressive speed in the first ten minutes of race one but a lack of bike time eventually caught up with him as he dropped back to seventh. Ever the fighter, Febvre came out firing in race two and got the and with the noise of the crowd the Frenchman led for fifteen minutes then held strong for second to take third on the podium in only his second race back from his broken ankle. It just shows what adrenalin and fighting spirit can do when you have the talent of the Frenchman.

“It’s been a long road back to the podium,” confessed Febvre. “I still don’t feel 100% because I still have some pain in my ankle and have not had a lot of time on the bike. My speed is not so bad, I am quite surprised, but the racing itself is very tough, especially because I was sick all week with a fever and could not train. A holeshot in the second race made race much easier, so I just tried to enjoy my time on the track because I was missing some fitness, and I put in a good performance to end up on the podium.”

Tommy Searle: 13th overall on paper doesn’t immediately stand out but after qualifying tenth fastest and running in the top ten during the qualifying race, Searle was forced to DNF due to a mechanical and had to start from the outside gates on Sunday.

The Brit worked hard coming from behind in a very deep field in both motos on a track that is hard to pass on to get into the top fifteen (14-13) both times out and rescue some valuable points after the bad luck of Saturday. Searle always goes well here and if he hadn’t had the Saturday set back could well have been in the top ten overall.

Searle commented: “13th today, rode alright from not the best of starts. Happy to put two races together and the bike felt good all day.”