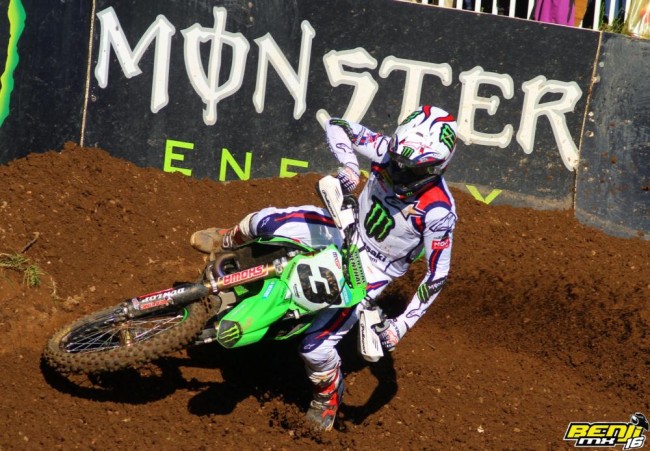 Romain Febvre: The former world champ was on fire on his home tur!. A genius pass to get by Jeremy Seewer and another great move to pass Jeffrey Herlings for the lead and the win in race one, underlined just how well Febvre rode and the comfort and trust he has in that Kawasaki is evident, it looks like he doesn’t have one single doubt about the bike! Yes, Herlings found the pass to win race two and the GP, but this was a big weekend for Febvre, finally no mistakes and going bar-to-bar with Herlings all day, the Frenchman stepped up and delivered at crunch time. Febvre is very much in the mix for this title if he takes this form into the final month of the series, because in France he and Herlings were on a different level to the rest.

Febvre said: “I was happy to win the first race, especially because I haven’t won a race in a long time so I am happy with that. Our speed with Jeffrey was really fast which made the second race really challenging because we were again 1 and 2 after a few turns, I knew it was going to be challenging until the end. Like he said, he made a mistake in the turn which allowed me to go around him and pass him. I tried to make a few fast laps to make a gap. At the end, I wasn’t that fast in a few sectors, then he caught me. Obviously, I was disappointed because I almost won at home, but anyway it’s good to be on the podium. It’s great to see a lot of fans out there. They deserved the win but I could not make it happen. We are really close in the championship which means every weekend you can take the red plate, which for me is fine. Hopefully we keep it like this until the end and we have to find something in the pocket in the few last rounds”.

Jeffrey Herlings: The Dutchman never stops fighting, but these days he controls his bursts of speed. Herlings dropped back to four seconds behind Febvre in both motos but bided his time, didn’t go crazy and, once he found his flow, he reeled Febvre in with late race speed reminiscent of Tony Cairoli. We haven’t really seen a Herlings at his best all year with injury and getting landed on, but it looks like his best level is finally starting to show and it’s aligning patience with speed. Herlings is hitting top form right when it matters and now has the red plate 6 ahead of Febvre and 10 ahead of Gajser. Can they reel him back in?

Herlings assessed: “Actually today was pretty good. I raced here three years ago so I definitely knew Romain was going to be good today and that I had to step up my game. This morning you could see that nobody could really match my speed. We were two seconds ahead of the 3rd. Going into the race I knew I had to bring my A game. Actually, the set up I had for race one was pretty difficult. I was struggling a bit and got arm pump. Then I just could not hold Romain and he made a pass. I had to let him go and try to close him at the end of the race but it was too late and I could not put a good fight anymore. He won fair and square. Second race, I had a good start again. He beat me on the first turn, then I managed to pass him on the second or third turn. I was trying to pull away, but it was tough with his speed. I think I had a 2 or 3 second gap, then I had an issue. I’m lucky I did not lose much time and kept the 3 second gap. I managed to win this race and win the overall and looking forward to next weekend”.

Jeremy Seewer: It was a great to see the diminutive Swiss rider approaching his best level again after health issues. This was more of what we expected from Seewer and he is showing that it was the illness that has prevented more of these rides but even with riding not at full strength, Seewer has brought his usual consistency and sits sixth int eh championship and top Yamaha rider. All in all it’s still been a decent year under the circumstances.

A happy Seewer said: “My feeling is good going into Spain because I had one of my best races this year a few days ago in France, so things are really looking good. We have made some good progress and I still feel like I have more room for improvement and am capable of doing better. My confidence is growing now, which is helping also. I am looking forward to going racing and doing those last few GP’s. It’s not my favourite track, but we go there feeling strong. I don’t think it’s an issue; the goal stays the same. Top-five will be a good result, but the podium is the goal.”

Pauls Jonass: For me Jonass showed once again in France that he might be the next guy to join the big five, or big four as it will be next season with no Cairoli. Jonass is showing he has the speed to with the front men and did so again in France. And this is joining a new team and coming back form a huge injury. With another winter Jonass should be even better next year and he is already riding really well and shutting up the doubters.

Pauls commented: “On paper today was a good day overall, although a fourth and a fifth for sixth is a little bit difficult to accept! I felt pretty strong on the bike in both races and the set up that we have on my MC 450F is working really well, it’s just that I’m missing that last little bit of speed early on in the races. Today was an improvement in that respect from last week, though, so it was actually a pretty decent day with decent points, and we still have a lot of racing to go in the championship.”

Maxime Renaux: This was a superb performance from the world championship leader. Urged on by his home crowd, Renaux wasn’t weighed down by the red plate and pushed his way through the field after two average starts to go 4-2. Even battling teammate Geerts in both motos in an entertaining duel. Renaux was riding loose and very fast and it would have been very interesting to see him battle Vialle if he had got the starts.

Renaux said: “I think I tasted all of the rocks from Lacapelle. I had to fight so hard. I had two similar motos in the end. I started both races inside the top-12 and had to fight like never before because this track is not an easy track to pass. It’s very tricky and small in places, but anyway, I managed to find my way through. Honestly, I am super happy with myself today because I did all that I could. It’s bittersweet because I feel like I gave 100% and it’s my home GP and I really wanted to win, but I have to be happy with myself and how I was riding. I gave it my all.”

Mattia Guadagnini: Yet again Guadagnini shows his mental strength to bounce back after a bad GP. The Italian is absolutely the real deal and has been a revelation this year. His technique on the bike is fantastic, pick up the front wheel over selected bumps and standing up until the apex of the corner, Guadagnini is ticking all the boxes this year. But the one problem everyone will have again next year is beating Tom Vialle, once again, Vialle executed his race perfectly, two holeshots and controlling both motos to take his first 1-1 at his home GP, Vialle is up to fourth in the championship and closing in on second place, a marvellous return to action after injury for who is showing himself to be the best 250 rider in the world.

Guadagnini: “I’m happy to be back on the podium, especially coming back from last weekend because the feeling was really bad, I was not very good. We come here and we did great job, so I’m really happy and I was also about taking my first pole position and here was really important for the start, I took two good starts and I tried to do my best. The track was tough, the start was really important, I’m happy to finish second. The second race, I lost a bit of rhythm on the track, made a few mistakes and Maxime passed me but anyway I’m happy to take second place and hopefully we will have some good races in the next few weeks”.

Vialle: “I was a really nice day, it’s the first time I won the French GP, so it’s just amazing to ride in front of the public and it’s really nice to have them at the race. There was a little bit more pressure than a normal GP but I managed to do good. I’m really happy because the start was really important today as it was not so easy to pass and I did two great starts. I’m really happy to win both races again and it’s just amazing for the fans”.

Podcast! Jonathan McCready and Andy McKinstry discuss the French GP and the great battle between Jeffrey Herlings and Romain Febvre. Listen on Spotify or YouTube below or get it on iTunes here.