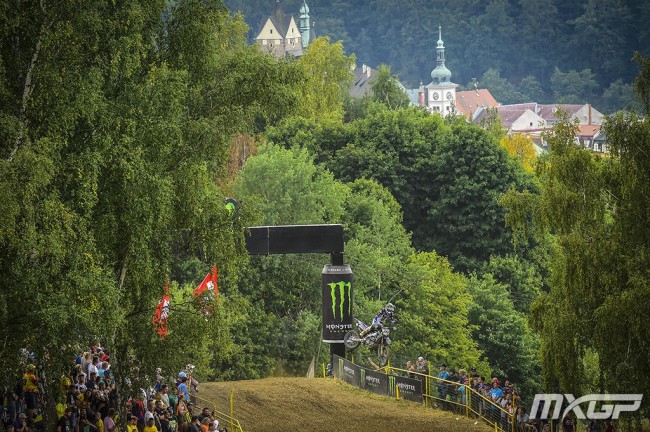 Romain Febvre: This was the Romain Febvre that stormed to the 2015 MXGP world title. Fast and finding grip and lines where others couldn’t, the Frenchman looked in control at all times in Loket on the slippery surface and even Tim Gajser, winner of seven Grand Prix in a row, couldn’t find a way to defeat him.

In what was a perfect day. Febvre even got two good starts in the top three and from there was able to find his way around Gajser and Seewer to get the front and he never looked back, controlling both motos, always appearing to have a bit more speed if necessary.

Amazingly, this was Febvre’s first Grand Prix win in THREE YEARS! Now he has one under his belt again, more might follow as the season draws to a close in what appears to be his final few GP’s for Yamaha after being linked heavily to Kawasaki for next season.

Febvre commented: “I feel amazing. The whole weekend has been good for me. Right from the beginning my speed has been good, and I managed to go 1-1. I am really happy. It has been a long road back to victory and not an easy one. Many tough GP’s and some injuries. We are back! I am so happy, and happy for my team Monster Energy Yamaha Factory MXGP. It means everything.”

Jeremy Seewer: Jeremy Seewer is getting closer and closer to a win! The Swiss consolidated his second in points, an impressive achievement in only his second year in the premier class, and at Loket he really pushed hard to hold onto the lead in both motos. Seewer ultimately ended third overall behind Gajser and Febvre but he was right in the mix all moto long in what was a well-earned podium.

With a smooth, neat and tidy style, Seewer is managing to tame the big Yamaha that many, especially of a smaller stature, find hard to ride but Seewer seems have got the factory machine dialled to his liking and is impressing right now. As we understand it, Honda have an interest in him for next season but Yamaha are keen on retaining him too, and with every good performance his salary might just get a little bit higher!

Seewer said: “I struggled to set-up the bike here, on a 450cc it’s really tricky because on a track like Loket we have a bike with so much power, but no traction. I managed to turn it around and find my flow. Romain was on another level today, but I think I had the same speed as Tim (Gajser), so it would have been nice to have kept second position. I am happy to be on the podium though, and the most amazing thing was to take three holeshots.”

Jeremy Van Horebeek: The Belgian was superb in Loket and if he had better starts he could well have had a chance to battle for a podium!

Van Horebeek has always been very good at Loket, it was the sight of his one and only GP victory back in 2013 and his smooth style seems to suit the tricky, off-camber, hilly circuit.

Despite two relatively poor starts Van Horebeek found his way into the top ten both times to go 7-6 for fifth overall to stay in eighth place in the points as privateer in a very, very competitive field, and he must also now be a shoe-in for yet another appearance in the Belgian MXoN team.