Who impressed: MXGP in Loket 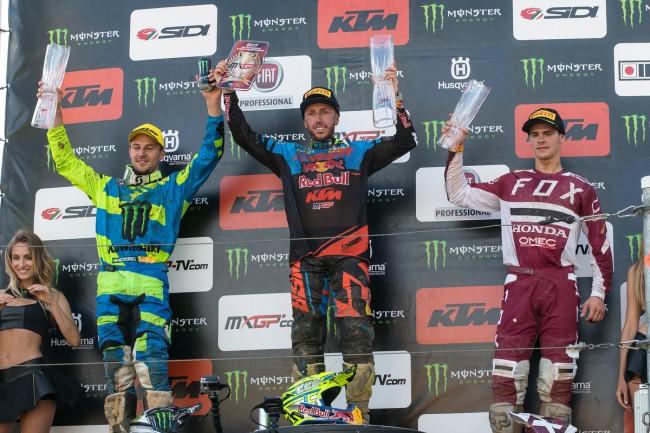 Tony Cairoli: Is Cairoli in the best form of his career? Maybe, he is certainly back to his best and Loket was further proof. Cairoli admits it isn’t his favourite track and he hasn’t won there for a few years, but last weekend he passed and pulled away from hard-pack specialist and first moto winner, Tim Gajser with a best lap two seconds quicker than anyone else. Cairoli is simply awesome right now and seems to be able to push at will. He has now beaten the his toughest sand competitor in the sand (Herlings) and his biggest hard-pack competition (Gajser) on a track in doesn’t even really enjoy! The Italian seems to be making big statements all year with his performances. Cairoli even said he is already thinking about Lommel (and no doubt another battle with Herlings) before the second moto!

Tim Gajser: Yes, the second moto didn’t go as plan, but it was good to see the defending champion back on form and up at the sharp end all weekend, including a textbook moto win in race one. It has been a very tough season for the Slovenian with all the injuries but the two weeks off have allowed Tim to let his body heal and he is returning the rider he was last year and at the beginning of the season.

Arnaud Tonus: The Swiss rider showed the new 2018 450 Yamaha is competitive straight away with a fourth place in the opening moto, although a bad start ruined the Tonus’ chances of a repeat, and he had to settle for tenth and eighth overall. But it was still a good way to debut the new machine and also underlines Tonus’ potential when things go his way with a good start.

Gautier Paulin: Paulin had a surprisingly poor day in Portugal last time out but at Loket the Frenchman was back on form and fighting for his position with Herlings, and then fending off his countryman Febvre after a big battle in moto two, confirmed Paulin was back to the form we usually expect from him. Fast all weekend and showing perhaps more aggression that usual, Paulin seemed determined to get his results back on track at Loket. He is good in the sand too so he should continue to be in the mix for a top three in the championship for the rest of the season.

Clement Desalle: Desalle solidified his second position in the points at Loket by finishing aptly going 2-2 for second overall, a position he is more that familiar with over the years! Desalle is always good on the slick circuits, and rode well all weekend. The top of the championship looks like a championship from 2010 with Cairoli and Desalle out front but their experience is proving invaluable this year against the younger riders. Desalle doesn’t embrace the spotlight but the quiet Belgian is doing his talking on the track this year and as is his way, is quietly impressive.