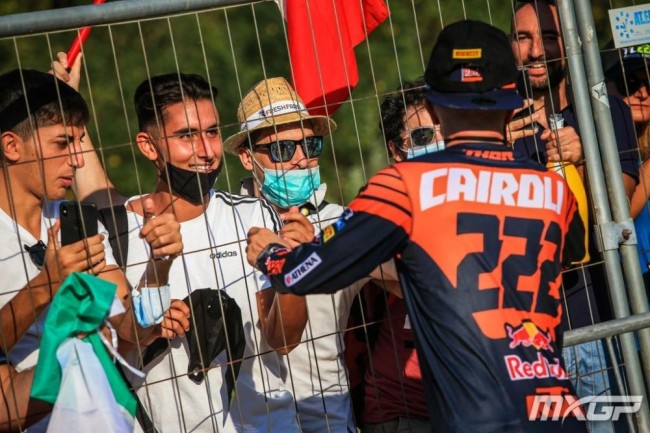 Antonio Cairoli: What a rider! 35 years old and winning your 91st Grand Prix as you take over the points lead while still dealing with a dodgy knee. It was quite the day for Tony Cairoli who ended a three GP stint on a track he isn’t a fan of by coming away with the win. Sometimes I feel this guy doesn’t get enough credit, what he is doing right now is even beyond what Chad Reed was accomplishing in supercross at the same age.

Hunter Lawrence called Cairoli the Goat of MXGP recently even though he rode for Stefan Everts and, as Cairoli goes for his 10th world title this year, the Italian is now comparable to the great Belgian, especially as he is running at the front two years later than even Everts did and doing it while running down the likes of Prado and Gajser in the races. This guy is more than a generational talent is is one of the greatest of all time – and some may feel they can now justifiably call him the greatest when it comes to outdoor motocross.

Jorge Prado: His first GP win last week and his first moto win this week – and yet again he dug deep for it! Prado is ticking all the boxes of a champion and that battle with Seewer showed why Prado is world champ, he never gave in and forced Seewer, who had more speed, into the mistakes before then holding off Cairoli at the end despite being ill in bed all day before!

Prado had no energy left halfway through race two but he stayed up right and held on to sixth for a podium. With a weekend off to recover and Mantova and Lommel coming up plus his home Grand Prix, Prado should be vying for GP wins for the next few GPs, and probably isn’t counting himself out of the title if he gets a couple of wins quickly!

Romain Febvre: It’s really enjoyable to watch Romain Febvre on the the Kawasaki, he just looks so comfortable on it! Although a quick roam off track for a bit of sight seeing didn’t aid his effort for a podium in race one but he still came back through the field to tenth. An okay but not great start in race two didn’t deter the fiesty frenchman who battled Prado hard before taking third then running down Cairoli but unable to make the pass. Good starts was all Febvre was lacking in Faenza to really challenge for the GP win, but he looks really good on the Kawasaki.

Jordi Tixier: The former MX2 world champion has bee quietly effective this season and at Faenza it was another strong performance for Tixier who is showing good speed and good results as he runs his own team. It’s not an easy combination and Tixier deserves some credit for the level he is riding at under the circumstances. Good in all conditions Tixier holds 13th in the championship and impressed in Faenza and beyond this season.