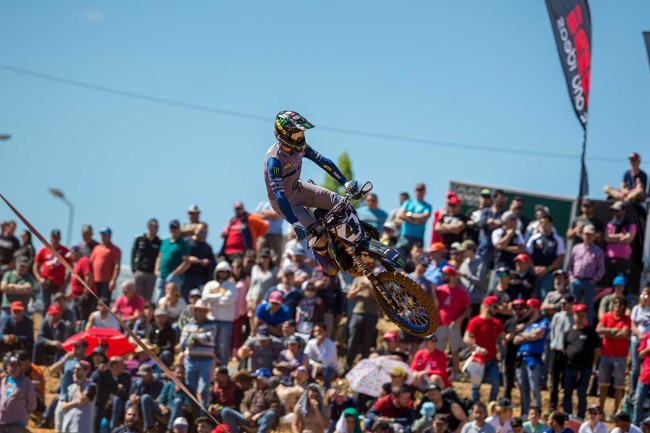 Arnaud Tonus: After missing he entire 2018 season Arnaud Tonus showed just why Wilvo Yamaha kept their faith in him for 2019 with a brilliant podium in Portugal.

It wasn’t just the fact Tonus got the podium, it was how he did it. Tonus was the only man with the pace to run with Gajser and Cairoli and at time was catching the pair. He didn’t quite have the intensity to run their pace for 30 minutes, but when it was clicking and he had the flow, he had their pace and he battled Cairoli right to the last couple of laps in the final moto for what was potentially second overall. Tonus has always had the talent, style and technique but it’s great to see the injuries haven’t affected his raw speed.

Tonus said: “It feels amazing to be back on the podium. It’s hard to put the feeling into words actually. I just feel thankful. Really thankful. Thankful to my team, and to Yamaha, and all of the people who support me for sticking behind me through what was the toughest time in my career. To be back up here after all of that is so cool. I am so happy and especially because I had to fight really hard for this result. I was passed and I had to pass people back and fight really hard, and that just makes a result like this so much sweeter, to know that I fought for it.”

Tim Gajser: After a lot of crashes in Mantova this was a huge win for Gajser to take points off Cairoli in the championship and show the mistakes in Mantova didn’t affect his confidence. Gajser even put in the fastest lap of the race on the last lap of the first moto to keep Cairoli at bay to underline his determination to win this title. This time it was Cairoli who made the mistakes and Gajser got the lead down to 34 points with more hard pack races coming up, Gajser has the opportunity to take even more points off the Italian.

“It was really great to come away with two wins and the overall here in Portugal,” said Gajser. “I put last weekend behind me and I knew that if I focused and rode like I know how to ride, I could do well at this Agueda track. Still, to get both moto victories is a great confidence booster and backs up my win in Trentino very nicely. I now have the fastest laps in the last four motos so my speed is good and I know I am feeling strong too. These back to back races are tough but I head to France really happy with my riding and confident that the bike and I are working well together. A big thanks to the team for working so hard to help make this happen, and let’s keep up the effort!”

Jeremy Seewer: The diminutive Swiss came out firing in race one with some sensational speed and aggression more reminiscent of Justin Barcia than the usually smooth and precise Seewer! But the aggression worked and Seewer got himself into third and briefly onto the back wheel of leaders Gajser and Cairoli.

He couldn’t quite keep that pace up but it showed the level Seewer is capable of and fifth overall despite a crash late in race two was a nice reward for potentially a break-through performance in Portugal. This might have been Seewer’s bst ride since coming through the field at his home GP in Switzerland in MX2 while chasing the world title.

Seewer commented: “I had a positive weekend. I had two good starts from a bad gate pick, especially on this kind of start. I had good speed this weekend. I finished fourth in the first race which was really good because I struggled yesterday, but I felt good today. Second race was really good again, I settled in fifth, but the entry into the wave section here is really tricky. There are rocks, ruts, kickers, no kickers, lots to consider and every lap you get there, the bike handles differently. I got kicked sideways on the last lap and slid it out. I lost five spots. I still reached my goal, so this is positive for the next races.”

Clement Desalle: It was only his second race back from minor knee surgery but Portugal is always a track the Belgian has done well at the he was impressive again leading for a long time in race two until Cairoli eventually found his way by, paving the way for Gajser and Tonus to do the same. It was still good enough for fourth overall and signs that Desalle is coming back to his top form.

Desalle also showed some of his old aggression in the qualifying race nearly putting both Monticelli and Paulin on the deck with hard moves – so he must be feeling good again on the bike!