Who impressed: MXGP and MX2 Lommel 2 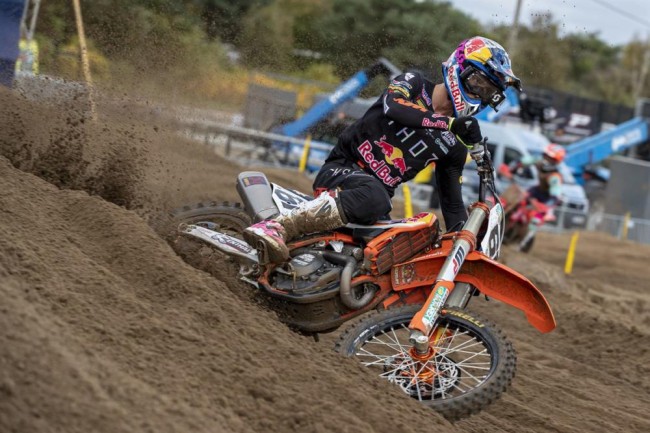 Jorge Prado: What a brilliant ride by the teenager! We all know the Spaniard is incredibly talented with brilliant technique but let’s not underestimate his determination and ability to dig deep. This was a race where determination to not give in won him the GP in spite of his obvious exhaustion. Cairoli looked to have more speed but Prado did everything right, blocked the lines then passed back straight away to maintain control at the front despite his fatiguing body. Prado has now won three Grand Prix in his rookie season, more than points leader Tim Gajser and that’s despite a broken femur ruining his pre-season prep and a broken collerbone in lockdown – and he is still in contention for the world title in his rookie with four rounds to go!

An exhausted Prado said: “It was a tough day and I didn’t feel 100% but I fought as much as I could. Tony and I had a good race in the second moto and I gave my ‘all’ for that victory; I’m really happy to have made it. The injuries at the start of the season meant that I missed bike time and I was racing without preparation. Now I am starting to feel better and I think it’s normal that it takes some time to get to a good level. Now we have to recover and get ready to go again on Sunday.”

Romain Febvre: The Kawasaki ace was on fire in the sand! Reeling in Prado and Cairoli at two seconds a lap, the hard pack specialist even went down, got back up and caught them again before hitting the deck again on the final lap going for the pass on Cairioli and losing a deserved podium. Febvre, like Gajser, is known for his brilliance at finding traction on slick circuits, but again like Gajser, he has really improved on the sand. This was a brilliant performance by Febvre and it’s superb to see the determined Frenchman back at the sharp end week-in, week-out and looking at one with his machine.

Febvre said: “I can’t really say that the day went as I planned! In the first race I passed Gajser when he made a mistake but then he passed me back when I also made a mistake; then I had some arm pump and lost contact with him but I could secure my third position. My second start wasn’t so good. The first corner was quite unpredictable but I came back to third; then I had a crash that cost one position but I came back third behind Cairoli again and on the last lap I saw him make a mistake before the waves section. I tried to pass him but I crashed, losing one position and the podium; too bad but I have no regrets as I had to take the chance. That’s racing; let’s hope that I will be able to put all the pieces together on Sunday.”

Ben Watson: Hot on the heels of his first moto win, Ben Watson rode two fantastic races through the field to take second overall at Lommel, he best ever result at Grand Prix level. Ben was on rails in both motos, flowing with the bumps and superb momentum, he was brilliant to watch. This is how good Ben Watson is and he is more than capable of a GP win this weekend – if he can get the starts and go with Vialle and Geerts from the beginning, his confidence is soaring and it’s his time right now.

“A second place, my personal best after four times finishing third,” commented Watson. “To go one step higher on the podium feels fantastic. I took two terrible starts, but felt strong in both races. I knew it was going to be two long and tough races, but I relied on my strength. I managed to charge through the field twice, made a lot of passes and was able to push until the end. I’m looking forward to the third and final race in Lommel, next Sunday. I hope I can maintain this momentum.”

Isak Gifting: The Swede was very good in EMX2 but he let go of his chance of the title there to take the opportunity of a factory Gas Gas ride in the MX2 world championship and he is taking full advantage! Gifting has been brilliant since he got on-board the red machine, and fourth overall on the toughest track on the calendar shows he is more than potential. The determined youngster is the real deal with fitness to match as evidenced by passing Thomas Kjer Olsen back with Jago Geerts on his tail after a mistake in race two to still take fifth in the moto.

“It’s an amazing feeling,” said Gifting on fourth overall. “Eighth overall and now fourth overall, I’m really happy. I knew from my qualifying time that I was on the pace, and I know my fitness is good so I was confident ahead of both races. Even with crashes in both races I was fifth place so it has been a great day for me. I did get a little tired towards the end of race two but I stayed on the gas until the end. We’re making some really great progress so I can’t wait until Sunday.”