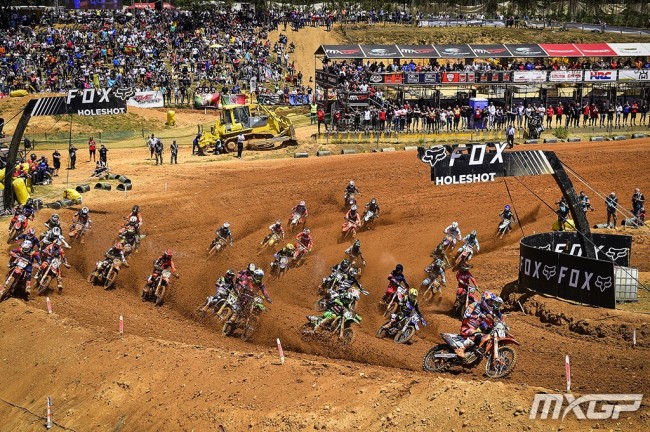 Just a few years ago Jorge Prado’s weakness was there for all to see – his hard pack riding being the biggest. Fast forward a couple of years and he’s now the complete rider. The fact his starts are so good make it even harder for his challengers.

In Portugal his rivals were probably the closest they’ve been to him all season but he got out of the gate and did the business yet again. He’s now got his hands back on the red plate and will be hoping to keep it for the rest of the season.

Coming into the season, Mitchell Evans had very big boots to fill by replacing Hunter Lawrence in the 114 Motorsports Honda team but he’s been every bit as good and maybe even better!

Evans started the season with a bang by getting on the box in Argentina and despite riding with a knee injury since then and a few DNF’s, it hasn’t hindered him all that much. Evans got back on the box with a third overall in Portugal. He’s putting himself in the shop window for a factory ride in 2020 that’s for sure!

There’s no doubt that Henry Jacobi showed he had the speed last year but consistency was a bit of a problem. Having signed with F&H Kawasaki and working with Marc de Reuver he’s now one of the fastest riders in the class and has the consistency to match it.

Unfortunately, the German crashed on the last lap in moto one with a third in the bag which dropped him to seventh. He got redemption in moto two though by coming home in an impressive second. Jacobi could be one of the riders to win a GP later in the year if his early season form is anything to go by.

Making the jump from EMX250 to the MX2 World Championship isn’t always easy but Portugal was a step in the right direction for Maxime Renaux. The SM-Action Yamaha rider has showed he’s capable of top ten results but hasn’t been able to put two good moto’s together so far this season but that all changed in Portugal.

Renaux finished both races in ninth which secured him fifth overall on the day which is an excellent result. The French talent will be hoping for more of the same as the season progresses.

It was nice to see the talented, Roan van de Moosdijk contest his first MX2 World Championship race of the season and he didn’t disappoint. The F&H Kawasaki rider was involved in a first corner crash in moto one but worked his way through to fourteenth but had some good lap times.

The F&H Kawasaki rider got out of the gate in the second moto and didn’t look fazed by racing in the MX2 class. He sat in fourth until three laps to go before Olsen made a move but fifth is still a great result. It’s good preparation for 2020 when he will make the permanent switch to the MX2 World Championship.

After a year out of the GP paddock, Andrea Zanotti has made a return to the paddock after signing with the Marchetti KTM team. He’s one rider that’s improving all the time which is pleasing to see.

Zanotti was actually running in the top ten in the first moto until four laps to go but eventually dropped down to fifteenth which is still impressive. He had another points scoring ride in the second moto to come home in seventeenth but he’s improving all the time as he adjusts to racing the MX2 World Championship.