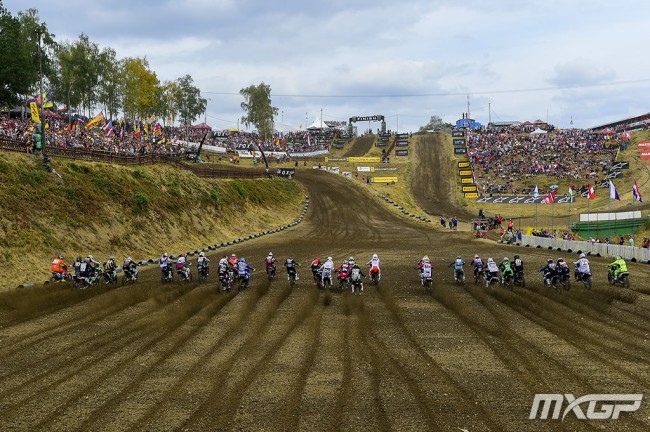 Jorge Prado: The Spaniard get’s a mention most weeks so I won’t go into much other than he’s riding exceptionally well at the moment. Can anyone beat him during the rest of the season? Since Geerts beat Prado in a moto, the Spaniard has got even better. He’s going to take some stopping but when you think of 2020, it’s going to be super exciting to see him in MXGP!

Adam Sterry: All weekend long the Brit looked so at home on the Loket track in Czech Republic. Sterry clearly loved the old school track and would have probably been happy with just two top five moto’s. However, it was much better than that as he just missed out on the podium.

In the first moto he ended up sixth in what was one of his better rides this season. In the second moto he really had a great flow going and attacked the track a lot more – he looked superb. He came back from fifth to second passing his team mate Jacobi. That must have felt great for Sterry after everything that happened in Germany. Not only that but second is his best MX2 moto of his career  – he’ll want to end the season with that kind of form and he’s now sixth in the MX2 World Championship!

With Sterry looking for an MXGP ride in 2020, this ride couldn’t have came at a better time. The F&H Kawasaki ride is a lot heavier than some of the young guns at the front in MX2 so MXGP might suit him better.

Jed Beaton: It was hard to know what to expect from the Aussie this weekend as he hurt his finger pretty badly in Indonesia. His preparation probably wasn’t the best heading into Loket but it really didn’t show.

The Rockstar Husqvarna rider went 4-9 for sixth overall, a very good GP for Beaton under the circumstances. If Beaton can end the season strong and then have a good off-season he has the potential to surprise many next year – he’s fast!

“It’s been a good weekend for me, especially the first moto. I got a decent start and was in around third or fourth coming out of the first turn, but some wheel spin dropped me back a few spots. I had a pretty good moto after that, following Thomas. Obviously, when Vialle and Vlaanderen went down it helped both of us, it was good to get fourth. My start wasn’t so good in the second moto and it was hard to make passes. I lost some time behind a few riders, so I wasn’t able to get as far forward as I wanted. But it’s been a solid weekend and I’m up to seventh now in the championship. I just need to focus on good point scoring finishes in both motos at each of the remaining GPs now, starting in Lommel next weekend,” Beaton commented.

Kevin Horgmo: Believe it or not, the Norwegian was making his MX2 World Championship debut in Loket. The Creymert KTM rider has only recently got back on the bike again too after he broke his jaw but he was riding really well on his GP debut.

Horgmo went 13-10 in the races for ninth overall. Two solid and consistent moto’s is very important as he’s known to be a bit wild at times but if he can minimise his mistakes he could have a promising future. He’s expected to make the full time jump to MX2 next year so he now knows he has the speed for good results – a confidence booster!

Rene Hofer: Horgmo wasn’t the only rider making the jump up from the EMX250 series at Loket as Hofer joined him in the MX2 class. The Austrian has contested a few rounds this year but Loket was his best yet!

The KTM rider went 14-11 for twelfth overall. He has a lot of talent and considering it’s his first year on the 250cc he’s showed good speed. With another winter to work on the speed and some weaknesses he might have, he could be one to watch out for in 2020. Hofer is a promising talent that works hard too – a deadly combination!