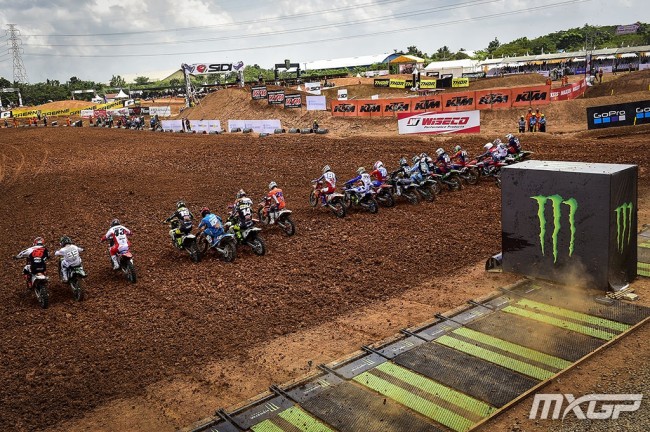 That was an impressive GP for young French talent, Tom Vialle. When Factory KTM made the decision to sign him it was seen as a risk but Vialle is certainly paying back the trust showed from KTM to sign him.

Vialle was strong all weekend long as he’s starting to believe more and more that he belongs at the front. He was a menace for Prado all weekend long and went 2-3 in the moto’s for second overall.  Could a win be just around the corner for the young French rider? He’ll certainly be looking to stand on that top box before the end of the season and as he gets used to the intensity of being at the front week in, week out he’s getting better and better all the time.

A few years ago it was looking like Maxime Renaux might never fulfil his potential due to so many injuryes. However, the SM-Action Yamaha rider made the permanent switch to compete in the MX2 World Championship this season and he’s starting to fulfil the potential he showed on the 125cc.

The French talent took a good start in the first moto and was able to finish in an impressive third position. Unfortunately, he couldn’t make it two good starts as he was buried outside the top ten at the start of race two. The determined French rider battled hard to secure seventh after making some passes. 3-7 was enough for fourth overall just missing out on that podium but a superb weekend never the less.

After coming into the season not fully fit, Jed Beaton has started to improve the last couple of weeks which is pleasing to see. The Aussie signed with the Factory Rockstar Husqvarna team for this season and will be looking to hold onto the ride for 2020 too.  Beaton finished fifth in both the moto’s as that seemed to be his position all weekend long. Indonesia was a long way to travel so Beaton will be happy for a positive weekend and will look to build on it.

“It’s been another good GP for me. I felt like Germany was a really good step in the right direction, and that I was finally managing to put things behind me and deliver the pace I know I can. I kind of kept that momentum going here with two more strong results. It was a tough GP, we all knew the heat wasn’t going to be too much fun, but both races went well for me. I’m pleased things are moving in a good direction now, hopefully next weekend will be another positive weekend, too”, Beaton commented on his weekend.

Due to the u23 age rule, it’s Brent Van Doninck’s last year to compete in the MX2 World Championship. The Belgian hasn’t been getting good starts but has showed some good pace at times this year, consistency seems to be the area he needs to improve.

The Assomotor Honda rider showed tremendous pace in the first moto as he came from outside the top fifteen to get back to eighth. Moto two went even better as he came home in an impressive sixth which equals his best moto result of the year. Van Doninck has a lot of talent and every once in a while reminds us of that but he’ll want to push for top five results during the remainder of the season.

After picking up an injury, Calvin Vlaanderen has missed five rounds of the MX2 World Championship but he was back for the long trip to Indonesia. The HRC Honda rider hasn’t lost too much of his speed as he looked pretty comfortable running at the front. He just needs to get used to the intensity of racing again.

A 4-13 scorecard meant he ended up seventh overall on his return to racing – not bad at all and a very good first moto. Vlaanderen should only continue to improve the more races he gets under his belt.