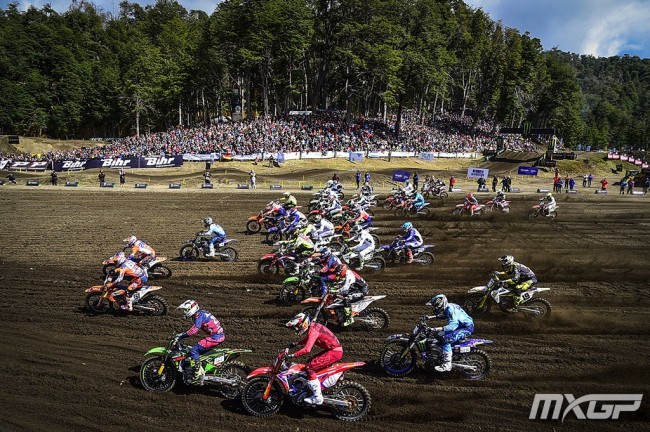 Well, what a weekend it was for new Aussie in the paddock, Mitch Evans. You might not have thought it watching him ride but it was his MX2 World Championship debut. Evans went 5-3 in the moto’s to end up on the podium with a third overall which is something special on his GP debut.

Mitch Evans in action on his 114 Motorsports Honda Pic: Youthstream

Just 12 months ago the 114 Motorsports Honda team got on the box in Argentina with Hunter Lawrence but then the season didn’t go as planned. The team will be hoping Evans season can be different and he can build on this podium to go on to have a great season. The Aussie mentioned in the press conference that after Saturday he’d have been happy with a top ten because he’d never have rode at a track so fast. That’s the challenges the World Championship will bring up and he’ll face plenty more during the season but he proved in Argentina he’s a fast learner. We might only be one round into the season but the factory teams will have took notice of that result.

Coming into the first round, Jorge Prado had big pressure because everyone expected him too win and after qualifying it was looking like it could be a close call. The MX2 World Champ turned things around in style though on race day when it mattered.

Prado made it look easy with his effortless style. Pic: Youthstream

As we all know by now, Prado is an amazing starter and two good starts set up him up in the races to eventually go 1-1. The young Spaniard will feel better now he has fifty points in the bag and will look to assert his authority on the championship chase as the season goes on. “It’s great to be back at the GPs and I had a lot of fun. I had two really good starts and that was important for the racing here. The priority was to get this first race done with good points and to be healthy and in the end we managed a win in both motos. I felt very good on the bike today and physically very strong”, Reflected Prado.

After finishing third in the world, two years in a row, Thomas Kjer Olsen wants to win this year. The Dane got his season off to a good start and was probably the only rider to have Prado’s speed on race day. Unfortunately, for Olsen starts were a problem and that’s something he’ll need to work on – he needs to be right with Prado on the first lap most moto’s to have a chance.

Having said all that, Olsen showed great pace around the fast flowing track in Argentina and did enough to go 2-2 for second overall. You can’t win the championship at the first round but you can certainly lose it so Olsen will be happy with his speed and results from round one. “It’s going to be a long year with plenty of racing to be done, so I am happy to head back to Europe second in the championship. The plan now is to get back to work. I want to make the most of this short break in the series and continue working before the next round at Matterley Basin”, Olsen said.

Making the move to the F&H Racing team looks to have worked wonders for Henry Jacobi. Having signed with the team it means he gets to work with Marc de Reuver and like last year it looks like the young German has had a strong off-season.

Jacobi had a good start in the first moto as he was in third and passed Vialle on the second lap. Olsen passed Jacobi but third was still a good result. In the second moto, Jacobi was outside the top fifteen on the first lap and at times last year he’d struggle to come up through the pack. He didn’t have those problems this weekend so that looks like a weakness he’s improved as he worked his way up to a fine fifth. Despite missing out on the podium he did have the same points as Evans so it was a good weekend for the German during his first GP with his new team!

Young French talent, Tom Vialle was making his debut with the Factory KTM team and he didn’t disappoint. A consistent day finishing 7-8 in the moto’s to earn seventh overall gives him something to build on. It was also his first time racing in Argentina so he adapted to the track well.

Vialle’s starts were on point which is also a positive point because they’re so important – especially when there’s so many riders running a similar pace. Vialle did drop off his pace slightly at the end of the moto’s but that’s to be expected at this stage, he’ll mature and get stronger as he gains more experience. “A super-good weekend: a holeshot and running top three in MX2! I was pleased with my riding and the top ten pace. I cannot complain about this weekend and my first GP. The experience also gives me a lot of motivation to train harder and to keep getting better”, Vialle commented.